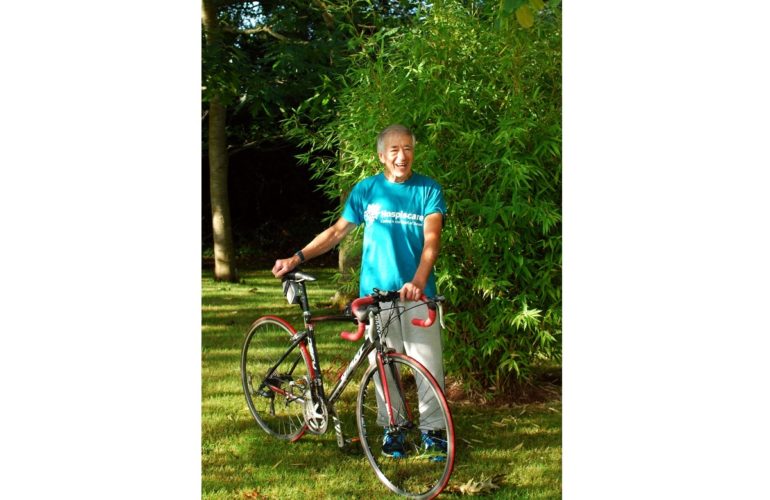 “My lovely partner, Christine Taylor, died in December 2015.  Christine had three operations, treatment over two years, and then a stay in hospital. She came home for the last ten days of her life and was tended to by the Hospiscare nurses.

Those ten sleepless days were very hard and very demanding, and on reflection I was thinking about how I got through this difficult time.  I think a lot comes down to the exercise. I have always kept myself physically fit, and being able to train helped me to eventually avoid becoming overwhelmed by grief.  It was like having my own support system.

Training gives me an external focus, it is a way of distracting myself from the stresses of life. I have always been outward-looking and I do Tai Chi, which helps me to zone in. You feel guilty about doing anything for yourself when your partner dies, but you are doing the right thing in taking some time out and setting yourself a challenge.

I had done some ultra-distance races in my seventies.  I completed a 24-hour walking race, the Isle of Man 85-mile walk, a 24-hour run in the Cotswolds, a 23-hour non-stop cycle ride covering 240 miles, then a parathlon last year (triathlon and a tandem 15,000 feet parachute jump), but I was ready to go further.

That is how the Land’s End to John O’Groats (LEJOG) 1,000 mile bike ride came up.  In Honiton we have a good group of friends who all enjoy walking, running, swimming and cycling. We never talk about excellence in these activities, we just want to get together for a laugh, do events and enjoy some tea and cake.

About 18 months ago, one of the group suggested LEJOG and 13 of us were interested, so that is where it started.  But life gets busy, so numbers did dwindle a bit, and by the time June came round there were just three of us.

So it ended up with myself, Sue who is 69 and Keith who turned 70 while we were en-route to John O’Groats. We wondered if we were the oldest trio to do LEJOG with a combined age of 219 years!  Sue is on the waiting list for a knee replacement and was advised to exercise, but I do not think the doctors had this distance in mind

We set off on June 29 and it took us 17 days in total. The first day we eased into it and covered 25 miles, then after that we averaged 70 miles a day, with 80 miles being the maximum we did in one go.

The first three days were the toughest. Cornwall and Devon hills are consistently very steep but we did not really suffer from aches and pains. The hills in Scotland were higher but more forgiving as the gradients were gentler. You are on your own on those long hill climbs, in solitude. It has similarities to losing a partner and you just have to keep going.  That is when the mental strength is needed.

My son Mark, aged 53, drove the support van and he was the good shepherd!  He guided us when we got lost, sorted our mechanical breakdowns and made cups of tea in the driving rain. He really was a support wizard.

We did a collection for Hospiscare along the way and got £150. Sue and Keith have since raised another £200.

Thanks to the kind folk of Honiton £601.84 was raised by selling plants on my drive. Grateful thanks goes to my good neighbours for tending those plants while I was cycling.

Sincere thanks to Paul Butterworth of Unicam,  who designed and machined a pedal attachment to enable Sue to compensate for an unequal power stroke and to the guys at The Bike Shed in Exeter, who were involved with Paul in not only getting Sue ‘on the road’ but dropping everything to sort out Keith’s gear problem on day three.

Very special thanks to my amazing companions who always had a ready smile, and were ready to go each and every day without one day’s rest.

Age does not come into my mind – numbers? I am always inspired by people older than myself who are doing amazing things. I read recently about a 100-year-old who did a tandem parachute jump, and veterans in athletics, endeavouring and breaking records. We learn that older people who do things like volunteering feel great for doing it and in doing so push the hands of the ‘ageing clock’ back.

Being positive and active is so important. I am in training for my next ultra which will be a 24-hour running event in May 2018, the Hope24 race in Plymouth to raise money for impoverished children around the world.

Oh, and I have signed up for the Hospiscare Breakfast Run in September just for fun.”

For more information about Len visit his JustGiving page, and for more about the hospice visit Hospiscare