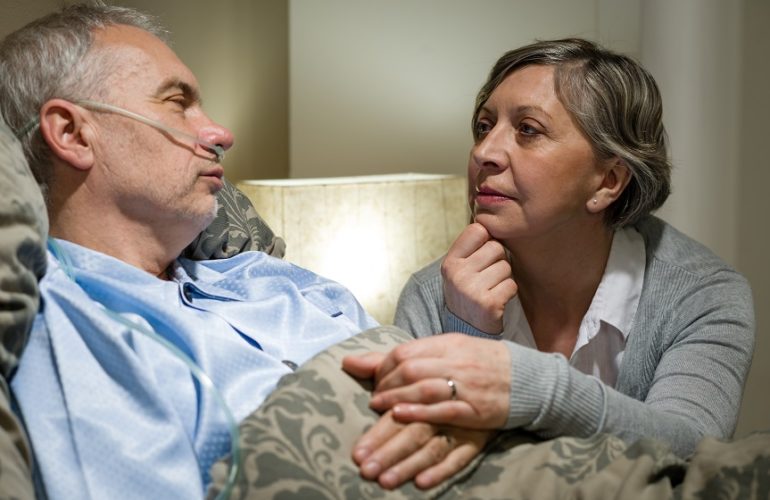 It is estimated that nearly 2,000 people have died in the last six months without financial support while waiting for the Department for Work and Pensions (DWP) to publish a review on how terminally ill patients access benefits.

On July 11 last year the Government announced that the DWP would review how dying people claim benefits.

The announcement followed a campaign from the charities Marie Curie and Motor Neurone Disease Association and a damning Parliamentary report into how the benefits system fails the terminally ill.

Sadly, terminally ill people and their loved ones are still waiting for the review to be published, all the while ten people are dying every day while waiting for Personal Independence Payments (PIP) – a total of over 17,000 since 2013.

Marie Curie and the Motor Neurone Disease Association are calling for a change in the law so that all dying people can get fast, easy access to benefits. Currently, terminally ill people can only get quick access if they are told they have six months or less to live, yet many have unpredictable illnesses and face a mountain of red tape, stressful assessments and financial uncertainty.

Today, six months on, Marie Curie is calling for the government to “find its heart” and scrap the six-month rule to make it easier for dying people to get the support they need and die with dignity.

Jo Lynton spent months trying to claim benefits for her husband Mark who died in July 2019 from motor neurone disease (MND). She said:

“My husband was ill for 22 weeks and 6 days and that was all. I spent 15 weeks fighting to get some help and the benefits we were entitled to and I didn’t manage to do it. It was very frustrating, very upsetting and emotionally it was a very difficult time.

“Mark didn’t have a quality of life from soon after he was diagnosed. He had to stop work before he got the diagnosis. It was so rapid. He found it difficult to eat. He couldn’t swallow. He struggled to breathe. He couldn’t get up and down stairs. He lost the use of his arms so quickly. He lost the ability to speak.

“Claiming benefits was horrendous. We were entitled to claim income support of £50 a week and council tax benefits. I couldn’t get either of those because I couldn’t get anybody from Universal Credit to answer the phone.

“We were on hold for 50-60 minutes and I couldn’t be on hold for 50 or 60 minutes because my husband could choke on his own saliva so what was I supposed to do? Tell him to choke quietly as I’m waiting on the phone to get £50 a week?

“It made me really, really angry because me and my husband have both worked all our lives. We’ve paid in to the system and the one time we needed help, we couldn’t get it.”

“The Government’s own figures suggest that ten people a day have died while waiting for PIP in the six months since the DWP announced a review. Tragically, we have not seen any notable progress and many more will no doubt be struggling to access other benefits such as Universal Credit.

“And while we have seen personnel changes at the DWP, it is now a new year, with a new government, which has a clear majority and, therefore, no excuse not to act fast to stop ten more people dying everyday without the support they need. It’s time now to get this done.

“The law is already set to be changed in Scotland this year, so anyone diagnosed with a terminal illness can get fast access to devolved benefits.  The new Government should now find its heart and follow suit – dying people don’t have another six months to wait.”

“The announcement of the review into access to benefits for people with terminal illness, including MND, gave us some optimism that things would change. But, six months on, we are no further forward and people are still dying without the financial support they need and are entitled to.

“We need the Government to act on its promise now. Any further delay will only cause further frustration, stress and fear for people already facing the most difficult time of their life.”

“These shocking findings highlight how terminally ill people are at the mercy of a callous benefits system that effectively puts process before people’s needs.

“It is completely unacceptable that many terminally ill people and their families are forced to endure hardship and emotional distress for months while they wait for financial support and that in so many cases families do not receive this support until, tragically, it is too late.

“The current dysfunctional benefits system needs to be radically overhauled. We urge the Department for Work and Pensions to act without delay and deliver its review on benefits to ensure that terminally ill people get faster and fairer access to financial support as a matter of course in future.”

To read the Parliamentary report visit Six months to live?