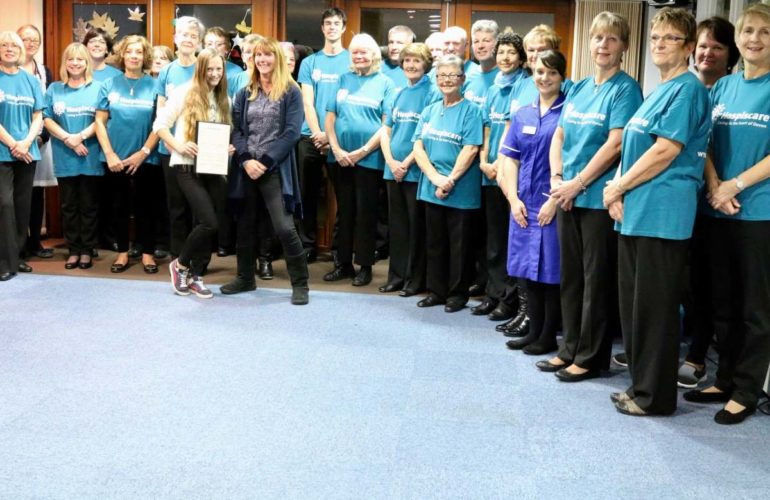 As a way of coping with her grief and communicating the overwhelming level of support that she and her family received from Hospiscare, Josie wrote the poem ‘Hos-Peace-Care’ and presented it to staff at the hospice. Josie said, “I found it easier to express my feelings in a poem rather than trying to speak them. Although some lines were difficult to write, others came a lot easier to me”

Two years later the musical director of the Hospiscare Choir, Alfie Pugh, set the poem to music to be performed at the hospice’s Light Up A Life remembrance service on Sunday 18 December.

Before the cathedral performance, the Hospiscare Choir gave Josie and her mother Jenny Sanders, Geoff’s daughter, a preview of the song in an intimate performance at the hospice. Speaking about the performance, Josie said, “it was so funny to hear the choir actually singing my poem, and really nice. I know Granddad would have loved it.”

Jenny Sanders had little experience of hospice care before her father started came to Exeter’s Hospiscare but she was amazed at the level of compassion and support her family found there.

Jenny said, “when Dad was ill and we arrived at the hospice we could finally take a deep breath and relax. Dad loved watching the birds and squirrels in the garden and we knew he was safe here. It’s so different from when he was in hospital. I was always worried and felt like I couldn’t leave him, it was such a stressful time for the whole family. I hadn’t experienced a hospice before and had some preconceived ideas of what it would be like, so I was really apprehensive about it. I shouldn’t have worried, as soon as Dad came into Hospiscare he fell in love with the place and the people; nothing was ever too much trouble for anyone. That meant so much to our family as we could all go home for a bit, knowing he was being so well cared for. He had the best last week he could possibly have.”

See more of the Hospiscare choir and Josie on ITV West Country.