Trustees’ Week: Trekking to Everest Base Camp for hospice care 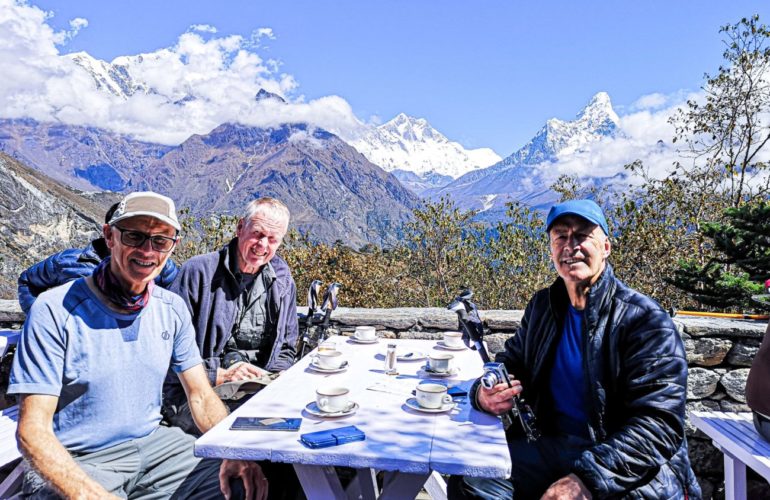 An intrepid group of 20 trekkers of all ages embarked on a journey to Everest Base Camp last month to raise funds for Mary Ann Evans Hospice in Nuneaton. The group was encouraged by two trustees of the hospice, John Barrett and Dr. Peter Handslip, who also took part in the climb.

Their aim was to raise funds for the charity’s new Rapid Response daytime pilot scheme. The service currently provides overnight care within one hour to patients in their own homes who are in their last 72 hours, and is expanding to cover both night and day.

The ambitious feat saw the trekkers climb to an altitude of 5,300 metres at Everest Base Camp, and then on to Black Rock (Kala Patthar) at 5,600 metres. John tells us more:

“I still sit here and cannot believe what we have achieved – the likes of me in my 70th year having trekked from the infamous airport at Lukla all the way to Everest South Base Camp in Nepal and back safely – an altitude of 5,300 metres above sea level – an unbelievable experience made amazing by our group of 20 trekkers and the team of 20 Sherpas and support workers.

“I read beforehand the tale that it is not you that gets anywhere on Everest, it is the Sherpas that take you there. Having been through the pain and emotions there is no argument, I would have got nowhere without them.”

Unfortunately two of the trekkers had to pull out after succumbing to Acute Mountain Sickness, but the group remained determined.

“Regardless of everything else what really kept us going and totally focussed was the fundraising – the dream that our efforts would enable the Mary Ann Evans Hospice Rapid Response team to get on with their fabulous work for the next year without the normal financial constraints in which they work. It took away the pains, the doubts, the fears, the continuous pounding in your chest, the inability to breathe, the lack of sleep and so many other hurdles.”

But altitude sickness wasn’t the only obstacle they had to overcome. Peter explains:

“One of the hazards along the way were the very large yak heading towards us on very narrow steep rocky paths. A familiar cry to warn everyone was “yak attack!” to which we had to respond by getting to the uphill side of the path toute suite!”

Peter describes the moment they arrived at their destination: “On arriving in sight of the Everest summit just before Namche bazaar we were overcome by the sheer magnificence of these mountains, and this just got better as we got closer”.

“Arriving at base camp was literally the icing on the cake, with giant glaciers and ice walls above us. On the ground there were hundreds of prayer flags to which we added flags and prayer notes for Mary Ann and our sponsors.”

“The prayer flags were absolutely awesome” John adds. “They looked superb tied between the two massive boulders at Base Camp with Everest standing majestically behind. We thank our corporate sponsors and to those along the way that covered them in dozens of prayers in all languages representing so many religions.”

So far they have raised £37k and are continuing to fundraise for the Rapid Response Scheme for the rest of the year.