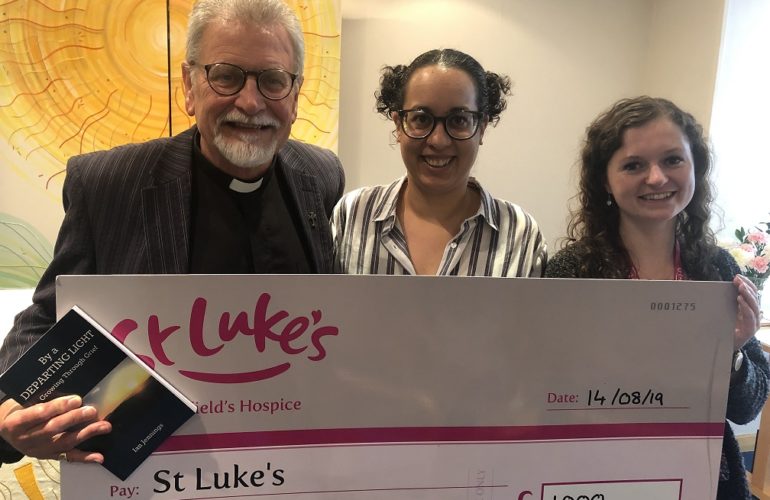 A vicar from Sheffield has written a book about the death of his wife, which is helping people through the bereavement process while raising funds for St Luke’s Hospice.

When Barbara Jennings was told the cancer she had been battling had reached the point where she had little time left, she told husband Ian that she wanted him to share their story of love and loss.

“I remember that when she knew she only had a short time to live she said: ‘I can’t believe I will have to leave you in a few months,’ and then she told me I should write a book about it,” says the retired Sheffield Anglican Team Rector.

“It was part of her instinctive awareness that writing would be a therapeutic exercise and would help me through the process of grieving, and also perhaps be helpful for others who are on the same journey.

“We were in retirement mode and excited about the future when suddenly this vicious disease changed everything in a moment. None of those well-honed plans would be fulfilled. What is the point of prayer in the face of death? Are miracles possible? What to do in the heartbreak of brain cancer?

“These are some of the questions I try to answer with honesty and sensitivity in the light of my own experience.

“Barbara was always full of life – even when life was leaching away she awoke every morning and chose life. She lived as fully as she could for as long as she could and left a radiance behind. For the bereaved – when you say ‘yes’ to life, life will say ‘yes’ to you.”

Barbara – who was mum to Sarah and Paul – died in 2016 and Ian kept his promise to write the book, By a Departing Light, which is now on sale and raising money for St Luke’s Hospice, where Barbara was a patient in her final months.

“Barbara was right – it really did help me to process my feelings and to think through the whole issue of death and loss, giving me greater self-awareness,” Ian says.

Ian is delighted that the book is also helping other people, including the friends he has made through the St Luke’s Bereavement Counselling Service.

“I have had some very good feedback and I’m told it is a very readable book – in fact, people say they couldn’t put it down and they read it one sitting,” he says.

“I attended the St Luke’s bereavement group and it was amazing to be with a group of people who have experienced loss – it was very positive and very helpful.

“St Luke’s helped Barbara and it helped me, and I am very pleased I have already managed to raise £1,000 for them through the sale of my book.”