CareIn The Media Awareness of the Value of End-of-Life Doulas is Growing in the U.S. - ehospice

Awareness of the Value of End-of-Life Doulas is Growing in the U.S. 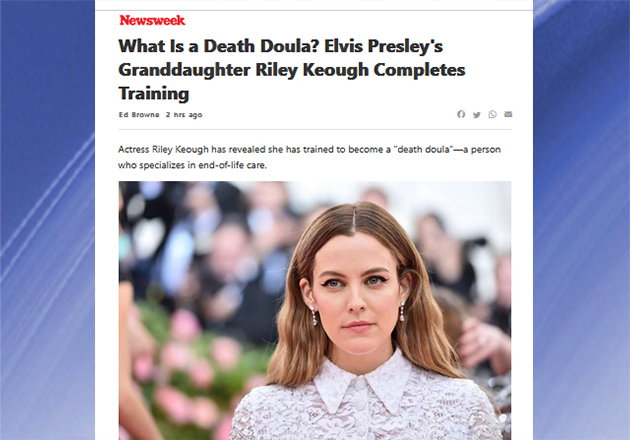 Media attention focusing on the role that End-of-Life Doulas can play in supporting people at the end of life is helping Americans better understand the concept of an EOL Doula.

In an article posted in Newsweek this week (03/23/21), “What Is a Death Doula? Elvis Presley’s Granddaughter Riley Keough Completes Training,” readers learn that EOL Doulas: “…are not to be confused with regular doulas, who are more commonly known for providing assistance to mothers before, during, or after they give birth.”

Journalist Ed Brown writes, “The role of a death doula may differ from case to case, but generally they can offer emotional, physical or spiritual help at and before the time of death.”

In a recent article published by CNN, , journalists Maria Morava and Scottie Andrew write, “End-of-life doulas help people die comfortably. In a pandemic, they’re more important than ever,” they look at growth of End-of-Life Doulas in the U.S. and the value they can bring during this pandemic.

The National Hospice and Palliative Care Organization has an EOL Doula Advisory Council working to help hospice and palliative care providers understand how to effectively use EOLDs to support the interdisciplinary team.