Care Changing The Way We Look At Dementia - ehospice

Changing The Way We Look At Dementia 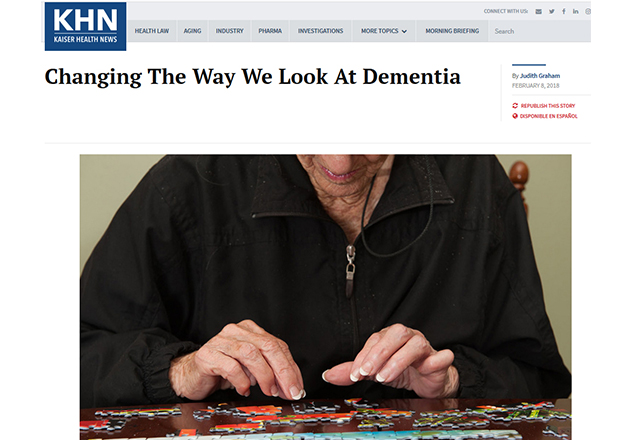 Before the presentation, audience members were asked to write down five words they associated with dementia. Afterward, they were asked to do the same, this time reflecting on what they’d learned.

“Without exception, the words people used had changed — from ‘hopeless’ to ‘hope,’ from ‘depressed’ to ‘courageous,’ from ‘empty’ to ‘fulfilled,’” said Erica DeFrancesco, a clinical assistant professor of occupational therapy at Quinnipiac University who helped organize the event.

The session, followed by an hour-long discussion about dementia, is part of a new grass-roots movement in the U.S. aimed at educating people about Alzheimer’s disease and other forms of dementia, dispelling the painful stigma associated with these conditions and enhancing public understanding.

A centerpiece of that effort, known as “Dementia Friends,” began just over a year ago under the auspices of Dementia Friendly America, an effort spearheaded by 35 organizations across the country.

Globally, almost 14 million people in 33 countries are involved in the movement, which originated in Japan

To become a Dementia Friend, most people attend an hour-long presentation focused on several themes:

Disease vs. typical aging. Alzheimer’s disease and other types of dementia are illnesses of the brain, not a natural consequence of aging.

Quality of life. People with dementia can live well, often for years.

“If we can change the way people look at dementia and talk about it, we can make a big difference in people’s lives,” said Philippa Tree, who spearheads a well-established Dementia Friends program in England and Wales, with about 2.3 million members, that has licensed its model to the U.S.

“It’s about increasing awareness and empathy so that if you encounter someone in the community who needs some help, you have some basic skills,” said Meredith Hanley, project lead for Dementia Friends USA.

William Anderson, chief of police for St. Cloud, Minn., went to a session of this kind late last year, with about 40 members of his department. One exercise — writing down all the steps involved in making a peanut butter and jelly sandwich — made an especially strong impression.

“I’d never thought about everything that goes into something that simple: taking the peanut butter and jelly out of the cabinet, unscrewing the tops, getting a knife, spreading the sides of the bread, putting the pieces on top of each other, cutting it down the middle,” Anderson said, adding that this was only a partial list.

“The point they were making was that folks with dementia might remember some of these steps but not others. At some point, they’ll get distracted or forget what they were doing and go on to something else. To me, that was eye-opening; it explained a lot.”

Now, Anderson thinks about “how we can make life more manageable for these folks, in simple ways.” An example: The St. Cloud Police Department’s building has a large vestibule, with two big glass doors. “If you have dementia, you’re going to walk into that vestibule and probably turn around in circles because the doors don’t have an identifier saying ‘police,’” he said, adding that introducing new signage is under consideration.

Committing to a concrete action — visiting or phoning a family member with Alzheimer’s regularly, watching out for a neighbor, volunteering with a community organization or trying to make public venues easier to navigate, for instance — is required to become a Dementia Friend, though sponsors don’t check if people follow through.

“This is a social action movement,” said Emily Farah-Miller, executive lead for ACT on Alzheimer’s, a statewide effort in Minnesota to create dementia-friendly communities and disseminate best practices regarding dementia in health care settings.

More than 10,000 U.S. Dementia Friends come from Minnesota, which began recruiting residents for the program two years ago, before it became a national initiative.

This year, Minnesota ACT on Alzheimer’s leaders are working with African-American, Hispanic, American Indian, West African and Hmong communities in their state to make culturally sensitive adaptations to their programs. And they’re piloting a modified version of Dementia Friends in several elementary schools “to create a dementia-friendly generation of youth,” Farah-Miller said.

Individuals can also earn a “Dementia Friends” designation by watching an introductory video on Dementia Friends’ USA website, as well as a second video about dealing with people with dementia in various settings such as restaurants, stores, banks, libraries, pharmacies, faith communities and public transportation.

If you encounter someone who seems confused and disoriented on a bus, train, taxi or subway, try to understand what that person might need, one of these videos advises. Speak slowly, using short, simple sentences and give the person adequate time to respond. Remain calm and reassuring and avoid arguing or embarrassing the person who may have forgotten where they’re going.

Bob Savage, an 86-year-old diagnosed two years ago with Alzheimer’s disease, became a Dementia Friend last year and now speaks to groups in Connecticut that are promoting the program.

Some of what he tells them: “As soon as people learn you have Alzheimer’s, you’re stigmatized. People treat you different, like you don’t understand, and that’s very upsetting.”

Even if memory is lost, intuition and emotional understanding remain intact, Savage explained.

What he and other people with dementia want most is “emotional connection — that feeling of love that we had, that we may have lost” when a diagnosis was delivered and a sense of being a burden to other people descended.

In 2016, Savage moved to a campus in Southington, Conn., where 133 people with dementia reside in assisted living or a skilled nursing facility. Stephani Shivers, chief operating officer of LiveWell (formerly the Alzheimer’s Resource Center), which owns the campus, is leading Connecticut’s Dementia Friends initiative.

“What I’ve seen is that barriers seem to dissolve for people who attend” information sessions, she said. “Whether it’s ‘I’m not sure what to say to someone with dementia’ or ‘I’m nervous about being with someone with dementia,’ the ‘I don’t know what to do’ falls away.

Come join us on Feb. 13 from 12:30 to 2 p.m. ET for a live discussion about improving care and services for people with dementia and supporting caregivers. RSVP here.

KHN’s coverage of these topics is supported by John A. Hartford Foundation and Gordon and Betty Moore Foundation