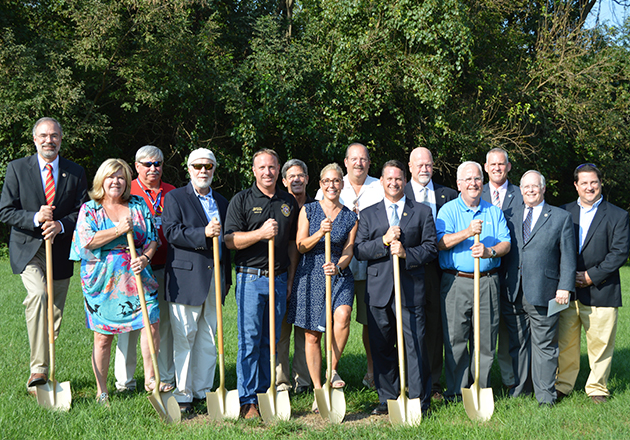 (Photo above: Dignitaries at the September 20 groundbreaking ceremony.)

Compass Regional Hospice, serving Queen Anne’s, Kent and Caroline counties in Maryland, hosted a groundbreaking and donor recognition ceremony on Wednesday, Sept. 19, to honor the upcoming expansion of its Hospice Center in Centreville from a six- to a 10-bed facility. About 100 guests attended the afternoon event.

“This is a milestone achievement for Compass Regional Hospice. Since 1985, we have had the honor of serving the residents of Queen Anne’s County, and more recently, in 2014, we regionalized and now serve the communities of Kent and Caroline counties, as well. We are not just a hospice provider, but also the regional provider of grief support services to our three counties,” Guerieri said. “With the growing need for these grief and bereavement services in our communities, so grows the necessity for expanded space to be able to fill those needs, hence the need for the current renovations to our Hope and Healing Center, which began August 13 and will be completed in the next several weeks.”

Guerieri continued, “In an effort to never have to turn away someone in need, we embarked on this initiative to expand our Hospice Center in Centreville, growing the facility from six to 10 beds. Our community deserves quality inpatient hospice care, and through this expansion, we are making sure they have access to that care.”

Guerieri said she is honored to lead one of the larger nonprofits on the Eastern Shore, which employs more than 100 staff members, “who are all committed to the same mission of quality end-of-life care and grief support.”

Maryland Department of Health Secretary Robert Neall said hospice is important for families, “not just for saying ‘goodbye,’ but for surviving the loss of a loved one.”

“Because it really is both,” Neall said. “The work you do and the families you help are felt through the generations. I just admire a community coming together and doing something magnificent, like you already have, and what you’re about to do.”

Neall said he was attending representing Gov. Larry Hogan, who could not be in attendance.

“Thank you so much for what you do for your community. And thank you for the many people you are going to help through the useful life of this asset,” Neall said.

Kathy Deoudes, chair of the board of directors for Compass Regional Hospice and chair of the organization’s Capital Campaign Committee, followed Neall.

“To all of our supporters and donors, staff and volunteers, board of directors past and present, and our elected officials – take a moment to reflect upon the significance of where you have brought us,” Deoudes said, “and more importantly, what you have brought to your fellow community members in the form of quality hospice care and grief support for anyone who needs it, regardless of an inability to pay for services.”

Deoudes said Compass Regional Hospice is just $600,000 shy of its initial capital campaign goal of $4 million, a campaign the organization embarked on in 2016. She said the campaign will fund the four-bed expansion to the Hospice Center in Centreville; the renovations to the Hope and Healing Center, which houses Compass’ grief services programs; the renovations and establishment of the new Hospice Center in Chestertown, which opened at the beginning of this year; an endowment fund to support Compass Regional Hospice in Queen Anne’s, Kent and Caroline counties; and the retirement of the mortgage debt on Compass’ main office building in Centreville, “so it can focus its funding and efforts on what’s really important – our patients and their families.”

More than 214 individuals, families, companies and private foundations have participated and donated toward the campaign, Deoudes said.

“We’re a relatively small community. To grow from 20 employees a few years ago, and 20-something patients on census, to 100 employees and more than 100 patients, per day, on census, is marvelous accomplishment,” Deoudes said.

Sen. Stephen Hershey attended the event and spoke, saying he is proud he and Team 36, which includes Dels. Steven Arentz, Jay Jacobs and Jeff Ghrist were able to secure $1 million from Gov. Larry Hogan’s capital budget.

He said, what began as a $250,000-line item in the governor’s capital budget eventually saw Team 36 with the opportunity to add another $750,000, securing a $1 million commitment from Gov. Hogan for the expansion project.

“We have to work very hard for the projects that are important to our communities, in the budget,” Hershey said. “We were able to protect that (money) and make sure that it stayed in, and we’re very happy about that.”

“This is such a needed service in this community and we couldn’t be happier to be partners with Compass, and we’re happy to be able to help,” Hershey said.

“It was an amazing transformation. After a couple weeks (from agreeing to come on board in March 2017), I began to realize what an amazing group of people work in hospice, and their commitment to and devotion to taking care of, not only the people who are suffering from terminal illnesses, but their families,” Walsh said. “Without their amazing commitment, we couldn’t do what we do for the people of Queen Anne’s, Kent and Caroline counties. Every day, I’m so glad I got that phone call from (Heather Guerieri) last spring and that I can be part of it.”

Walsh said the organization takes care of around 100 patients daily in their homes, in skilled nursing homes and assisted living facilities, and in the organization’s residential facilities in Centreville and Chestertown.

“Not only is this (expansion) a new beginning for (Compass Regional Hospice), but it’s a new beginning for me,” Walsh said, “because starting January 1, I’m going to be Compass’ full-time chief medical director and I get to be here all the time. That’s very, very exciting and heartwarming for me because it’s amazing work. Having been in the community and referred people to hospice for 30-plus years, I knew that they did good work, but to actually see it every day and to work with the people who do it is just amazing.”

Congressman Andy Harris was invited to speak, as well. Harris mentioned the “incredible advocates” Compass Regional Hospice has through Team 36. He said hospice is driving the way legislators “think about things on Capitol Hill.”

“Our federal health care system is still directed at treating illness, not preventing it and not taking care of people once treatment is no longer going to work,” Harris said. “I’m glad to play whatever part I can to make sure that our federal programs support what you do here, cause you’re really taking care of patients and their families during one of the most critical times of their lives.”

Compass Regional Hospice – Care on your terms
Compass Regional Hospice is a fully licensed, independent, community-based nonprofit organization certified by Medicare and the state of Maryland and accredited by the Joint Commission. Since 1985, Compass Regional Hospice has been dedicated to supporting people of all ages through the challenge of living with a life-limiting illness and learning to live following the death of a loved one. Today, the organization is a regional provider of hospice care and grief support in Queen Anne’s, Kent and Caroline counties. “Care on your terms” is the promise that guides staff and volunteers as they care for patients in private residences, nursing homes, assisted living facilities and the residential hospice centers in Centreville and Chestertown. Grief support services are offered to children, adults and families of patients who died under hospice care, as well as members of the community who are grieving the loss of a loved one, through The Hope and Healing Center.