In The Media DC media focuses on We Honor Veterans - ehospice 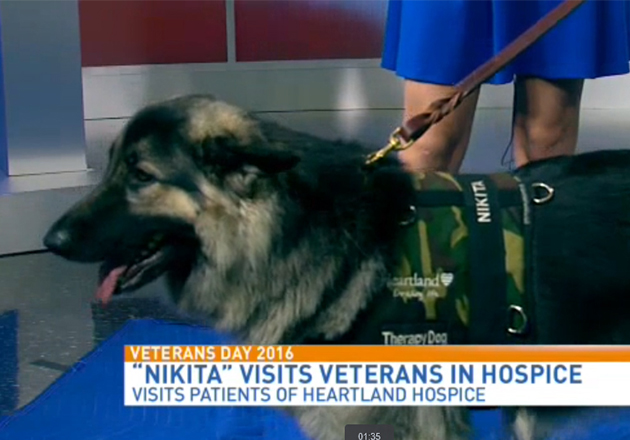 Across the nation, attention turned to U.S. military Veterans on November 11. A day of annual remembrance and appreciation for those who have served our country. In the Washington, DC area, two prominent media outlets featured stories about the We Honor Veterans initiative and the work hospices are doing to care for Veterans.

On station WJLA’s morning’s broadcast of “Good Morning Washington,” the ABC affiliate in DC, news journalist Autria Godfrey interviewed former Lieutenant Colonel Dave Benhoff, a former Marine who has continued his service to others as the Veterans Coordinator at Virginia’s Heartland Hospice.

Benhoff was accompanied by his therapy dog, Nikita, and he spoke about the ways that he and Nikita support Veterans who are receiving care from Heartland Hospice.

That same day, on WUSA Channel 9’s “Great Day Washington” broadcast, Benhoff was joined by Dr. Scott Shreve, National Director for Hospice and Palliative Care for the Department of Veterans Affairs. They spoke about some of the unique needs that Veterans have at the end of life and the ways that the We Honor Veterans initiative, an innovative project developed five years ago by the Department of Veterans Affairs and the National Hospice and Palliative Care Organization has improved care for dying Veterans.

Currently, one out of four dying Americans has served in the military. Most served during World War II, the Korean War or the Vietnam War.
For many combat Veterans, difficult situations faced during their military service can come back and be difficult to cope with – both for the patient and family caregivers. Hospices are dedicated to making sure that Veterans under their care receive the acknowledgment and support they need at life’s end.

Shreve noted the way that We Honor Veterans has been a successful collaboration, bringing the expertise of caring for Veterans together with the high quality care that hospice and palliative care providers are known for. Hospices are linking Veterans with other Veterans and available resources that they might not be aware of.

One of the most important things that happens is the simple act of saying “thank you for your service.”

“Care and caring for our nation’s Veterans is something we are committed to every single day of the year,” said NHPCO President and CEO J. Donald Schumacher. “A national day of awareness, like Veteran’s Day, gives us the opportunity to raise awareness of some of the excellent work being done all over this country.”