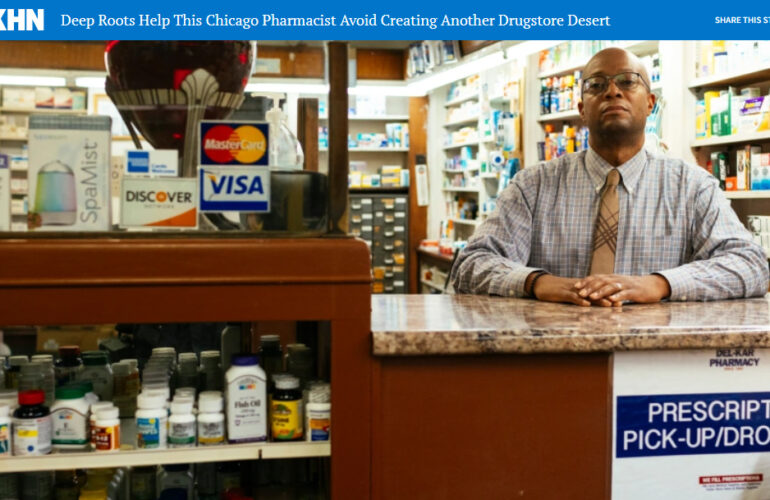 December 27, 2021 | No Comments
Categories: In The Media.
Tags: Kaiser Health News and KHN.

Photo: Owner and pharmacist Edwin Muldrow at the counter inside Del-Kar Pharmacy in the North Lawndale neighborhood of Chicago. Muldrow’s father opened the business in the 1960s. (Taylor Glascock for KHN)

CHICAGO — Del-Kar Pharmacy in the North Lawndale neighborhood has had a front-row seat to history. Martin Luther King Jr. bought his daily newspaper there when he lived in Chicago in the late 1960s. The Black Panthers’ local headquarters was a block away, and the pharmacy shared a building with the Conservative Vice Lords, a notorious street gang whose members still check in on owner-pharmacist Edwin Muldrow today.

When King’s assassination sparked riots in Chicago in 1968, the white-owned pharmacies in the area were ransacked. Muldrow’s father went to check on the pharmacy only to be told by the Vice Lords he had nothing to worry about.

“‘Go home,’” Muldrow said they told his father. “‘We’re not gonna let anybody touch you.’”

For nearly 60 years, the small drugstore has survived by building deep roots in the community, selling medicine, food and electronics in a neighborhood largely ignored by the large drugstore chains. Del-Kar is bucking a trend that has undermined numerous other pharmacies in Chicago and other U.S. cities. Although chain pharmacies are pulling out of many urban areas, sometimes citing rioting or theft, Muldrow isn’t quitting.

“Once you respect the community, the neighborhood looks out for you,” said Muldrow, 51, who started working as a pharmacist at Del-Kar in 1992. “They know that you’re here and you’re doing something positive.”

Like other community pharmacists nationwide, Muldrow has seen private insurers steer his customers toward their own allied chain, mail-order and specialty pharmacies. Urban independent pharmacies, particularly those in low-income Black and Latino communities, have been more likely to close than chain drugstores.

And pharmacies of all kinds in these communities, chain and independent, face a tough economic situation: They often have a disproportionately high share of customers enrolled in Medicaid or Medicare, which pay lower rates than private insurance.

According to a recent analysis she worked on, Black and Latino neighborhoods accounted for a third of pharmacy openings in Chicago from 2015 to 2020 but more than half of closures. As a result, the prevalence of pharmacy deserts increased from 33% of majority-Black census tracts to 45% and from 9% of majority-Latino tracts to 14%.

“Pharmacies are choosing to open in areas that already have pharmacies, in part because those are also the areas that have higher incomes and insurances that provide higher pharmacy reimbursement rates,” said Jenny Guadamuz, a University of Southern California health disparities researcher who led the study.

Muldrow said insurance often pays less for a medication than it costs him to acquire it. For example, he might be reimbursed $400 for an Advair inhaler that costs him $600.

“The profession is not what it used to be,” he said. “The profitability has been snatched.”

Average dispensing fees, set by insurance plans and intended to cover Muldrow’s overhead and salary, have plummeted from about $3 per prescription 30 years ago to as little as 10 cents, he said. He once sold medical supplies like lift chairs and oxygen tanks. But since Medicare implemented new fraud safeguards requiring accreditation, he said, he would have to pay $1,500 to $2,000 a year to continue receiving Medicare reimbursement.

“Now you have elderly people in the neighborhood that can’t come and get stuff,” Muldrow said. “They have to go to the hospital. They got to go through the mail.”

Muldrow keeps his store open by supplementing the meager payments he gets for filling prescriptions with other income. “The secret to our success here is that we own the property,” Muldrow said. “If I was paying $3,000, $4,000 or more a month rent, I would have been wiped out.”

Muldrow had job offers from multiple chain drugstores when he graduated from pharmacy school but chose to work for his father. “‘The only way I can repay you for giving me the opportunity to go to school is to come down here and work and continue what you started,’” he recalled telling him.

Chicago has encouraged pharmacies to locate in underserved areas — with little success. Qato pointed to a CVS branch that in 2010 received nearly $1 million in incentives to open in East Garfield Park. A nearby independent drugstore quickly closed, and the CVS shut its doors several years later, creating a pharmacy desert.

Illinois launched a program in 2019 to subsidize pharmacies in underserved urban and rural areas. But, Qato said, the program doesn’t adequately target neighborhoods at risk of becoming pharmacy deserts and excludes large chain pharmacies, which may be the only drugstores remaining in a neighborhood.

A year into the program, she said, only three of 80 eligible pharmacies in Chicago have received funds. Muldrow said he hadn’t heard of the program.

Some business strategies create de facto deserts. Late last year, the health insurer Aetna, owned by CVS Health, began preventing its Medicaid patients in Illinois from filling prescriptions at Walgreens pharmacies. As a result, some patients could no longer use the closest drugstore.

Dr. Thomas Huggett, a family physician at the Lawndale Christian Health Center on the West Side of Chicago, said some of his patients had trouble getting their medications in the first month of the new policy. One patient, who was homeless and had been diagnosed with severe mental illness, couldn’t get his prescription filled. Another had to take two buses to get his injectable antipsychotic medication. A third patient couldn’t get Suboxone, a treatment for opioid addiction.

“In the middle of one of the hotter spots in the country for opioid overdoses on the West Side of Chicago, it’s hard to imagine how anybody could justify it,” Huggett said.

In urban areas, Illinois regulations require prescription insurance plans to have at least one in-network pharmacy within a 15-mile radius or a 15-minute drive of their enrollees. But that can be too far to be practical for many customers, Huggett said.

“The majority of patients who have Medicaid have Medicaid because they are poor, and they generally don’t have cars,” Huggett said. “Looking at the maps, it is just so stark to see. The CVSs are intentionally avoiding black areas of Chicago.”

CVS spokesperson Mike DeAngelis said that about half of CVS stores nationwide are in areas that rank high on the Centers for Disease Control and Prevention’s Social Vulnerability Index, which tracks poverty, lack of vehicle access and crowded housing, among other factors.

“Maintaining access to pharmacy services in underserved communities is an important factor we consider when making store closure decisions,” DeAngelis said in an email. “Other factors include local market dynamics, population shifts, a community’s store density, and ensuring there are other geographic access points to meet the needs of the community.”

James Spidle, a 66-year-old veteran with serious heart problems, walks a mile using a cane to catch a bus in the Washington Heights neighborhood, about 13 miles south of Del-Kar, to pick up his prescriptions from a Walmart.

“I do the walk back and forth as a stress test,” he said. “If I don’t have any chest pains, I keep going.”

A closer option, a Walgreens, closed in 2016. A sign on the door directed customers to another branch that was a mile away in a more affluent neighborhood and had a grocery store pharmacy across the street.

The Endeleo Institute, the community development arm of Trinity United Church of Christ, has tried to fill the gap, using church vans to drive people to the nearest pharmacies. Melvin Thompson, its executive director, listed four other chain pharmacies that had closed within a three-mile radius of the Walgreens that shuttered in Washington Heights.

“Here we are in the midst of a pandemic, and we’re losing even more of these vital services in communities that can’t afford to lose,” he said. “It’s citywide, but it just seems to be relegated to Black and brown communities.”

Walgreens officials did not answer questions about how the company decides to close stores, but said that in metro Chicago about 99% of Chicagoans live within 2 miles of one of their stores. Walgreens spokesperson Kris Lathan said the company allocated $35 million to reopen 80 stores in Chicago damaged during the civil unrest after the murder of George Floyd in 2020.

“All but two of those locations have reopened,” she said. “The remaining two will open in the first half of 2022.”

Democratic state Rep. La Shawn Ford said pharmacy closures represent a loss of health care access for the community. “The pharmacy is not just a place to pick up medicine, it’s a surrounding of health care,” he said. “Who’s going to talk to that person when they get their medicine mail-delivered?”

It can also be a lifeline in other ways. During the pandemic, when indoor dining was shut down, Muldrow set up an outdoor grill and served burgers, tacos and other food. That showed him how much the neighborhood needed him — and for a lot more than medications. He is planning an expansion, to include a bodega with a juice bar and restaurant.

Muldrow was also reminded that the community is there for him in return. Last year, during the civil unrest, several businesses near Del-Kar were destroyed. But, in an echo of 1968, his shop emerged unscathed.

“I didn’t have any worries. I slept real good,” Muldrow said. “The brothers over here on Lawndale, they watched over me. If you know the people, the people look out for you.”

KHN (Kaiser Health News) is a national newsroom that produces in-depth journalism about health issues. Together with Policy Analysis and Polling, KHN is one of the three major operating programs at KFF (Kaiser Family Foundation). KFF is an endowed nonprofit organization providing information on health issues to the nation.

This story can be republished for free (details).