Care Dementia and the hospice volunteer: An alternate way to connect - ehospice

Dementia and the hospice volunteer: An alternate way to connect 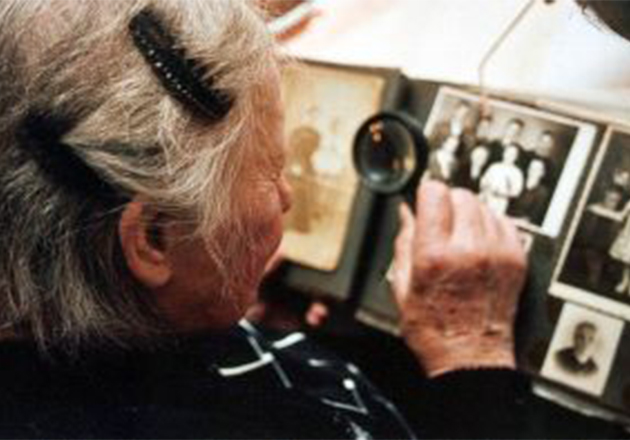 It is well known that people with dementia respond to pictures of themselves or family, or to photographs of places they have lived or known. This is an account of a person with advanced dementia and her response to pictures she had never seen before.

Ann B (not her real name) was a woman in her nineties referred to hospice care for “failure to thrive.” I was the hospice volunteer assigned to visit her. Ann’s dementia was at the point where ordinary conversation was difficult. She responded to my questions with short, mostly understandable comments. When she initiated conversation she would manage only a few words before she lost her thought, stopped, then put her head down in frustration. Often everything she tried to say was unintelligible.

During our visits I noticed she stared intently at the Northwest Coast Indian jewelry I enjoy collecting and wearing. I could not tell if she was attracted to its unusual design or simply its silvery shine. On impulse one day I took an exhibit catalog of Northwest Coast Indian artifacts with me, thinking she might enjoy seeing other things made by these people.

We explored the book together. I described what she was seeing as in “This is a dance mask of a bear. You can see its little ears and sharp teeth. The dancer puts this on his head and moves like a bear…” Ann studied each picture thoughtfully as we slowly worked our way through the book, enjoying each artifact in turn. She stayed focused and engaged about 30 minutes each time — which was long for her.

Ann grew up on a small tobacco farm in the South. I grew up in a rural part of Washington State, 90 miles north of Seattle, but not on a farm. My next offering was a book of photographs from this rural area, thinking Ann might enjoy pictures of farm life. With a picture in front of her, Ann could tell me about her farm. Her speech was coherent and intelligible. While her sentences were simple, she never lost her train of thought. She correctly identified various crops, the ones she liked best and whether or not they grew on her farm. She pointed out equipment that indicated a commercial farm (which hers was not) and responded warmly to a picture of a horse–drawn plough. With an unfamiliar picture “out there” as a “prompt” or reminder, she was able to talk easily. Without it, she lost her thoughts or responded with one or two words to my questions.

A Northwest Coast Indian teaching story from Haida Gwaii, Frog Girl by Paul Owen Lewis, was my next selection. The illustrations were extraordinary and carried the story with little need for text. I was curious if Ann would understand this book as a story or as individual pictures on each page. While she could still read, I chose to tell her the story, pointing out details in the illustrations that were mentioned in the story. Ann’s attention was focused, her comments clear and appropriate. When water in a lake was being lifted up so humans could go to the land beneath the water, she was astonished. “I’ve never heard of such a thing,” she said. When we got to the end she said, “That was an amazing story,” and wanted to go through it again.

As a young woman, Ann flew a small single-engine airplane for pleasure. When I asked what places she had flown to, she could not name any. When I brought a map of southern states she could easily tell me what cities and towns she visited, the quality of their airports (mostly grassy fields) and the difficulties of landing or taking off from each. Without the map as a “prompt,” this information was not accessible to her.

When I asked Ann if she liked these books and maps I brought, she responded with enthusiasm. “Oh yes! They are so different.” “Different” I could do and we continued to explore a variety of books. She had always possessed a curious mind and this approach seemed to tap into it, connecting with a still fairly functional part.

For a final example, I knew Ann worked for a while in India, so I brought a book on Asian sacred places. While she did not recognize the various temples and shrines, she did see sari-wearing women in some of the pictures. She then told a humorous story of her efforts to get dressed in a sari and to keep it properly in place during the day. Had I asked her directly if she ever wore a sari, I would have gotten a one– or two–word response without the detail and humor of her experience.

After about seven months this connection slowly faded until books became overwhelming and so we stopped. But the deep companionable relationship we forged during our “book time” continued even as her condition deteriorated. As she neared death, I thanked her for letting me share this last part of her life’s journey. I told her how much I enjoyed my visits with her and spoke of the “different” books we had explored together. She listened intently, nodded silently in agreement, reached for my hand (a difficult movement for her), raised it to her lips, and kissed it. It felt like a thank you and a goodbye.

At this writing, I have not tried this approach with any other person with dementia. It may be unique to Ann B. But I hope this account will inspire other volunteers to try this way of connecting when conversation falters.

For Further Reading While circulating a draft of this paper for comment, I was directed to the website of Naomi Feil, MSW, ACSW. The website describes her theory and method of validation and her extensive research. My experience with Ann B fits well with Feil’s, and strongly suggests my approach will work for others with dementia

About the Author: Since 2009, Jai Eileen Swyter has served as a volunteer in the palliative care and hospice program at Goodwin House, a continuous care retirement community in the Washington metropolitan area. She earned her PhD in medical anthropology and bioethics, and her professional career included work with dialysis patients. As part of this work, she was developing hospice concepts long before hospice had found its way to this country, and also had the opportunity to train with Dr. Elisabeth Kübler-Ross who deeply inspired her. Now, in being a hospice volunteer, she has been able to resume one of her life’s passions. The author extends special thanks to Ann B’s family for their kind permission to share this experience.