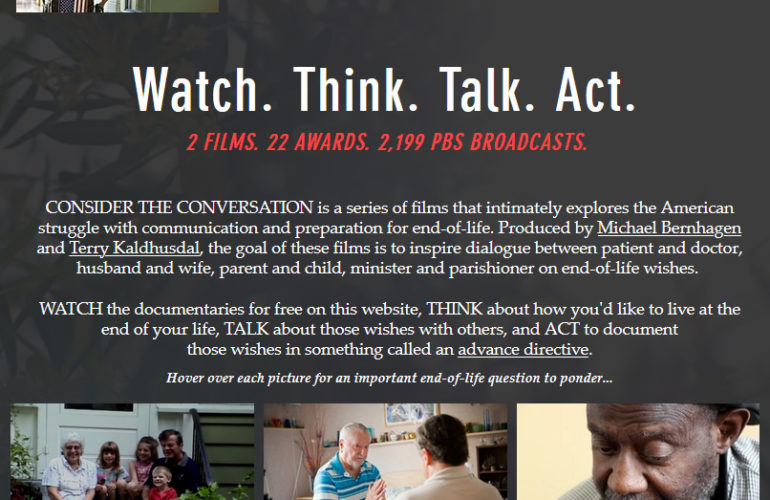 April 24, 2020 | No Comments
Categories: Education and In The Media.
Tags: Consider the Conversation, Michael Bernhagen, and Rainbow Hospice Care.

“It was sad and joyful and gut-wrenching, all at the same time,” said Bernhagen, Rainbow’s Director of Community Engagement and Care Partner Relations, of his Dad’s passing on April 2 and subsequent funeral. “Rollie was blessed with a large, loving family; a long, joyful life; and a quick, peaceful, comfortable death. A man this good surely received a fast pass into heaven. No waiting at the Pearly Gates for my role model and the finest, kindest human being I’ve ever known!”

Unfortunately, for Mike, his father’s death came on the heels of having to get another close family member medically cleared and into long-term treatment for a life-threatening illness prior to the implementation of the Governor’s Safer at Home orders. Those same Safer at Home orders also meant Roland’s funeral in Waupaca would have to be limited to ten people or less, including the Parish Priest and Funeral Director, and that those in attendance would have to be socially-distanced (no closer than 6 feet).

“The problem was, Dad had seven children, two daughters-in-law, nine grandchildren, eight great-grandchildren, and countless nieces and nephews. So, you tell me, who gets to come? Who has to wait until we can schedule a celebration of life memorial service in the summer?” lamented Mike. The new reality of life during the COVID-19 pandemic, in other words.

Stress, grief, and loss like this have the potential to break the human spirit and Mike acknowledged he needed help.

“Two things have greatly eased my suffering during this public health crisis – watching online services aired by my church in Madison and completing work on the launch of a new website for Consider the Conversation, the PBS film series I made a few years back,” said Bernhagen.

The film series, comprised of two installments – Consider the Conversation: A Documentary on a Taboo Subject and Consider the Conversation 2: Stories about Cure, Relief, and Comfort – intimately explores the American struggle with communication and preparation for end-of-life and seeks to inspire dialogue between patient and doctor, husband and wife, parent and child, minister and parishioner on end-of-life wishes. Co-produced with Terry Kaldhusdal, Wisconsin’s 2007 Teacher of the Year, Consider the Conversation aired 2,199 times on PBS stations around the country from 2011 to 2016 and garnered 22 awards including an Emmy nomination.

“Shortly after joining the organization in early January, I was encouraged to watch the documentaries as part of my new employee orientation, “ said Emy Miller, Rainbow Hospice Care’s new Marketing Liaison. “These films taught me more about the end-of-life journey and the importance of advance care planning, palliative care and hospice than anything else I have encountered before or since. I literally could not believe they were made by my co-worker, Mike, and his good friend, Terry, a public school teacher.”

The new Consider the Conversation website (www.considertheconversation.org), officially launched the same week Mike’s Dad was buried, is a place where people can watch the moving films for free, in whole or in part, as well as download helpful discussion questions.

“People deserve to see Consider the Conversation because it informs, inspires and empowers the viewer. This seems very important, especially now, during a time when so many are worried about the future and our loved ones,” said Miller.

For Michael Bernhagen, whose films brought comfort to so many people during their critically acclaimed 5-year PBS run, they are also bringing him peace during his time of great need.

This article was originally posted by Rainbow Hospice Care.