From Tears to Smiles to Peace 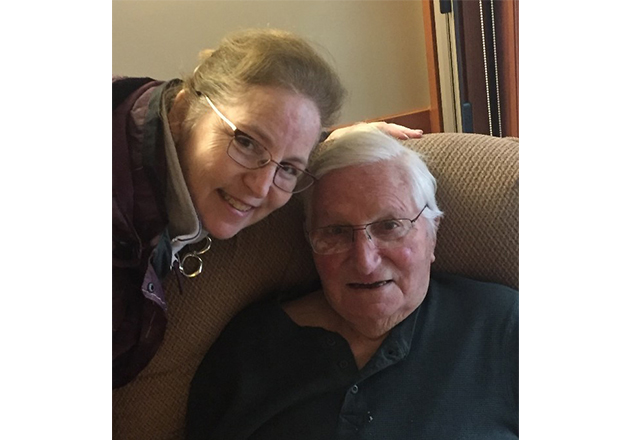 Photo: Bill and his daughter Jan.

When Bill Bilgen arrived at the Rainbow Hospice Care Inpatient Center in January 2018, his daughter Jan felt content and an overwhelming sense of relief. It was just 24 hours earlier she found herself scrambling to find a new place for her dad to go.

Bill was staying in the hospital after suffering from aspiration pneumonia when Jan received some unsettling news. Her dad needed more care than his current skilled nursing facility could provide with managing his symptoms related to his cancer, COPD, and difficulty swallowing.

“We were devastated, all alone in the hospital and not being able to take him ‘home’ where he had been living for three years and only 30 seconds from my back door,” said Jan Bilgen. “It felt like a tsunami.”

Now faced with the idea that her dad had little time left, months or even days, a hospital social worker urged Jan and her family to consider hospice and gave her a list of potential places. Jan decided to start with a facility that she didn’t know anything about. A place on her list called “Rainbow IPC.” She reached out to set up a visit for that same day.

As Jan made her way through the front doors, she was drawn in by the comforting atmosphere and the friendly staff.

“I walked in and felt the warmth and feel of not being in a hospital,” Bilgen said. “‘How had I never known this was here?’”

Even though Jan and her family were half an hour away and Bill was in new and unfamiliar surroundings, they now felt confident that he was in great hands.

“We knew how wonderfully my dad was being watched over and cared for and could call any time,” Bilgen said. “Every time I left, I knew that if he passed before I returned, he felt like he was at home and loved.”

Jan got to witness the compassionate care and attention her dad received firsthand. Bill loved music and one of the nurses who cared for him did, too. When they got him ready for bed, they would sing together.

“One time I was lucky enough to be there,” Bilgen said. “There was no sadness or pain as we sang and tucked him in. I laughed leaving the IPC hearing his voice, and drove the entire way home with a smile on my face.”

Perhaps most importantly, Rainbow helped Jan and the Bilgen family create more meaningful memories with Bill during his time at the IPC. The staff organized a date night for Bill and his wife in the IPC family room. They cooked a special romantic Valentine’s Day meal for the high school sweethearts. The ambiance was then complete with beautiful china, soft lighting, and background music. Jan’s husband Jay also helped arranged for Bill to surprise his bride of 67 years with a dazzling arrangement of flowers.

One memory that Jan will treasure forever is when the staff called the family and told them that Bill had taken a turn for the worse and didn’t have much time left, and they should come to say their goodbyes.

“Everyone was able to see my dad the day before he passed,” Bilgen said. “It was a gift to us all that I know most people don’t get. I stayed and talked to my dad into the wee hours, played his favorite music, and told him we would all be okay but would miss him terribly. As sad as those hours were, I wouldn’t trade them for the world.”

Now almost four years since her dad’s stay at Rainbow, Jan and her family still remember the great experience her dad had with Rainbow Hospice Care and are happy the inpatient center became a second home for Bill.

“The IPC staff makes special memories with families,” Bilgen said. “I thought they would be all sad because my dad was dying, but I have significantly more good memories. They helped us be us and be in the moment. They made it okay to laugh and cry. They helped not just my dad’s physical needs but our emotional and spiritual needs, as well. They did that with great grace, authentic care, and without any judgment or pressure. They helped us find our way to a life without my dad alive in it.”