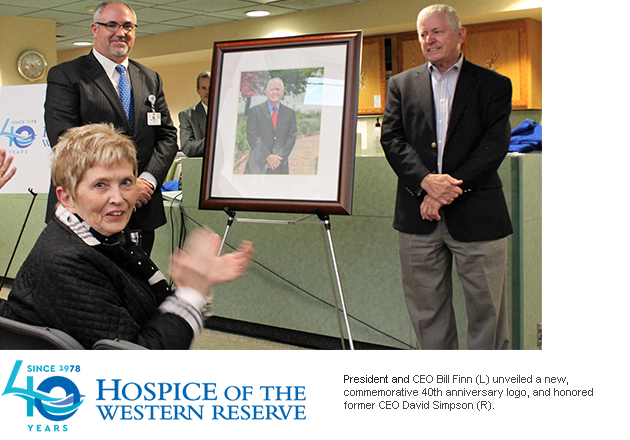 Our 2018 Vista Walk and 40th Anniversary Kickoff at David Simpson Hospice House served as a joint celebration of life and legacy. We gathered with 300 family members from our community to honor the memory of 48 loved ones. Many attendees dedicated memorial pavers along the lakefront inscribed with their special person’s name. Proceeds from these memorial tributes will support programs benefiting future hospice patients and their families.

Before the Vista Walk tour and program, President and CEO Bill Finn unveiled a new, commemorative 40th anniversary logo, and honored former CEO David Simpson, who played an instrumental leadership role in guiding the agency during its formative years. A new portrait of David will be permanently displayed in the hospice house that is named in his honor.

In their remarks, both Bill and David reflected on the people, and their work, that propelled Hospice of the Western Reserve to this point. More than just looking at our past, they both emphasized that the most inspiring aspect of celebrating our 40th Anniversary is looking for new ways to continue to innovate and grow to meet the needs of families in Northern Ohio for the next 40 years and beyond.

“We feel honored to have earned the trust of families in our community for so many years,” Bill Finn, CEO & President of Hospice of the Western Reserve said. “When someone is diagnosed with a terminal illness, it doesn’t mean their life stops. They still have plenty of living to do. In fact, this is the time when those things that matter the very most come into sharp focus. Our role is to provide comfort and support during this transition that will allow each person to have the best quality of life possible. As we head into the next 40 years, we will continue to look for new ways to innovate.”

This article was originally published on the Hospice of the Western Reserve website.

Author: Hospice of the Western Reserve