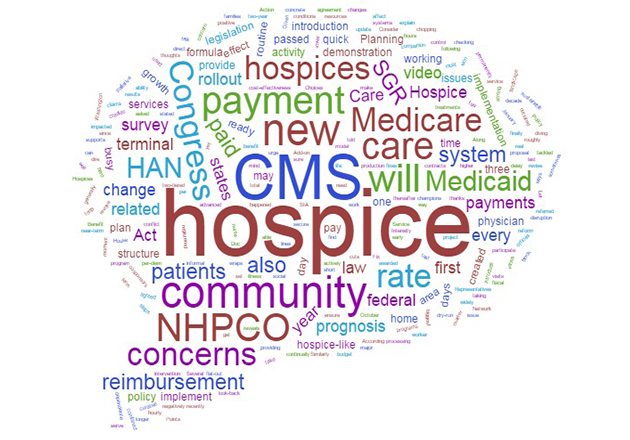 I love a good retrospective. Why? I’m usually reminded of something I completely forgot had happened. Or I can’t believe that it was only [insert number of] months ago that something happened. And how many people actually remember who won the Superbowl? So let’s take a look back at what happened in health policy in 2015…there may be a quiz later!

In March 2015, the Medicare Access and CHIP Re-authorization Act of 2015, overwhelmingly passed the House of Representatives. The following month, the Senate passed H.R. 2 with broad bipartisan support. The new law permanently corrects the flawed Medicare reimbursement formula for physicians (known as the SGR or “doc fix”).

Congress has been passing temporary SGR patches (17 since 2002) to prevent physician reimbursements from cuts up to 21%. Fortunately, hospice has been able to keep from being targeted in these patch offset packages. This permanent fix is a unique effort by Congress since its costs are only partially offset. Medicare providers will provide relatively minimal contributions to the offsets without worry of more cuts through short-term patches in the future. One of these offsets by an across-the-board reimbursement cut to post-acute-care providers, including hospice, in FY2018. The cut will come in the form of an inflationary adjustment, or “market basket,” cap of 1% (before statutory reductions) for that fiscal year.

Senators Mark Warner (VA) and Johnny Isakson (GA) introduced the Care Planning Act (S. 1549) in the U.S. Senate. The Care Planning Act is designed to give people with serious illness the freedom to make more informed choices about their care with the help of an interdisciplinary team of healthcare professionals, and the power to have those choices honored.

In July 2015, CMS announced that 141 hospice sites were selected to participate in the Medicare Care Choices Model (MCCM) demonstration project. The MCCM will provide a new option for beneficiaries with advanced cancers, chronic obstructive pulmonary disease, congestive heart failure, and HIV/AIDS who meet hospice eligibility requirements under the Medicare hospice benefit, to receive palliative care services from  the hospice providers who have been chosen to participate in the model while concurrently receiving services provided by their curative care providers.

A letter signed by 27 U.S. Senators was sent to CMS Acting Administrator Slavitt in late July. The letter, one of the focal points of HAN’s Advocacy Intensive, asks CMS to test any changes to hospice payment methodology. It contributed to the delay in payment reform from October 1, 2015, to January 1, 2015. Thank you to the hundreds of Hospice Advocates who asked their Senators to join this letter!

Which brings us to…

The two-tiered payment model for routine home care (RHC) days will be implemented on January 1, 2016. Hospices will be paid a higher rate for the first 60 days of hospice care and a lower rate for subsequent days in hospice care.

A service intensity add-on (SIA) payment, also effective January 1, 2016, will be made for patients receiving visits conducted by an RN or social worker during the last week of life when patients and families typically have more intensive needs. CMS will calculate and make the appropriate SIA payment based on a retrospective review, after a patient’s death, of hospice claims for the last seven days of the patient’s life. The SIA payment will be equal to the continuous home care hourly rate, multiplied by the amount of direct patient care provided by an RN or social worker for up to a total of four hours per day.

Visit NHPCO’s Hospice Payment Reform website for more information regarding payment reform implementation (these resources are for NHPCO members only).

There you have it. Just some of the highlights from hospice policy over the past year. We’ve been busy! I wonder what 2016 will hold… but whatever it is, you’ll be able to learn everything you need from Hospice Action Network!

This article was originally published on the Hospice Action Network’s blog.