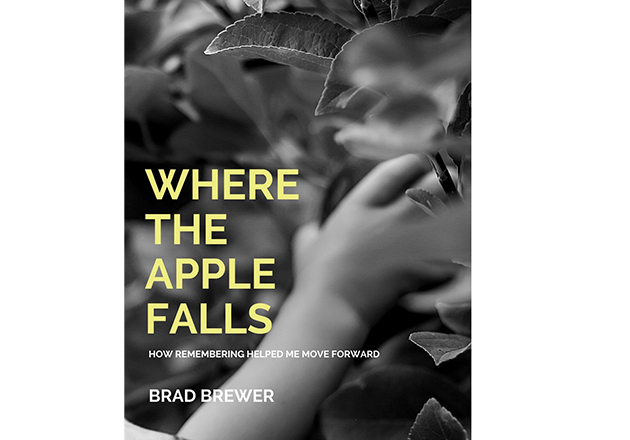 May 11, 2021 | No Comments
Categories: Opinion.
Tags: Brad Brewer, legacy, and Where the Apple Falls.

Excerpt from Where the Apple Falls

I know a woman named Marjorie who just turned 100 years old. She lives by herself, independently, in the apartments on Ocean and Pine where my wife Heidi and I lived when we first moved to Florida. Miss Marjie loves our little dog Oliver and thinks he is funny, so I used to walk him over to say hi on the days we saw her sitting outside. She reminds me how old she is whenever we talk, which I find unbelievably charming.

Young children and older adults always brag about how old they are for some reason, while the rest of us make jokes about celebrating the 19th anniversary of our 21st birthday to try and throw everyone off. Kids love to hold up their fingers proudly and announce to you, “I’m four.” Miss Marjie does the same thing. Earlier this year, I would walk over and say hello and she would exclaim, “You know, I’m ninety nine.” I would loudly reply, “I know you are!” Everyone always asks her the secret to living that long, so instead I ask her what she wants to be when she grows up. She laughs and without skipping a beat, tells me she has done so many things in her life, it’s hard to think of something new.

One day I said, “Miss Marjie, I bet if you wrote a book it would be full of amazing stories.” She thought for a few seconds and said, “I have done a lot of things, but I have never written a book.”

I want to help her write a book about her life, so I’m now conspiring with her visiting nurse Cindy to interview her and put her stories in a book. Miss Marjie has agreed to be interviewed but said she wouldn’t tell everything because the book would be too scandalous. I told her that’s probably a good idea.

In perhaps one of those fated or at least divinely orchestrated dovetail moments, around the time we moved to Florida, Heidi and her dad were almost finished with a website they had been building faithfully for several months in their spare time. Her dad John is a software programmer, which is a handy skill to have in the family. The idea was to encourage people to write about their life and lessons. They wanted to take the overwhelm out of the writing process by providing online interview questions as prompts for their favorite memories and stories. Then the website would easily publish the answers into a beautiful book. They named the website LegacyKept because they wanted everyone to know their life story can be an important legacy for their family; too often, legacies are diminished, distorted, or forgotten over time. The website would help people process and preserve their stories as a book so others could remember them and be helped in some way.

I naturally loved this idea and helped come up with some of the interview questions and initial plan for explaining how the site works and why it matters. My grandfather had written a book about his life and gave a copy each to his two kids and seven grandkids, so I could speak to the importance of having access to words written by those who came before us. The more Heidi described the mission of the website, the more I wanted to help make it a reality for people.

Ever since I started working on this project with Heidi and my father-in-law, I have been talking with people about family history. I talk with them about life stories, and why knowing, processing, and preserving our stories is essential to our well-being. One person I met with over coffee is a chaplain for a hospice organization here in Florida. Pam meets every day with people that are dying and she sits next to them, comforting and listening to them. As we sat in the coffee shop Pam told me that when she first started her work she assumed the question she would hear most often from someone receiving hospice care would be, “What is going to happen to me when I die?” She figured that would be the prevailing thought on most people’s minds. “It turns out,” she said, “one of the top things people really want to know, what they are often most concerned about in those final days, is what will happen to their family when they’re gone.” She paused to let that sink in.

“You mean they’re wondering if their family will be okay?” I asked.

“Yes,” she said emphatically. “That realization surprised me. But it’s really beautiful that they wonder if there is anything more they can do to help their family.”

I leaned forward. “That’s amazing,” I said. Pam and I talked for well over an hour about her work and how difficult it can be to feel like you’re offering enough comfort to a person. Then she asked what I was doing with LegacyKept and nodded as I described the book my grandfather wrote about his life and our family, and how much it meant to have it even though I still miss him terribly. I told her I want everyone to have something like that to remember their family story. She listened with compassion and told me it was a beautiful and important idea. I could tell Pam is very good at her job.

Most people inherit something from their parents, whether it’s money or property, or an attic full of old photographs and mementos. But what Pam said about the wish of an older adult imagining the world without themselves, stayed with me. Maybe they wish more than anything to somehow be an ongoing source of support, guidance, protection, provision. Maybe what we were doing with our website was going to help people in more ways than we realized.

Brad Brewer, MBA, is the CEO of LegacyKept, an organization dedicated to strengthening family relationships and preserving life stories as keepsake books. Brad is also a speaker, author, and performing songwriter. He recently released Where the Apple Falls, a humorous and insightful memoir focused on family legacies and the benefits of “an examined life.”