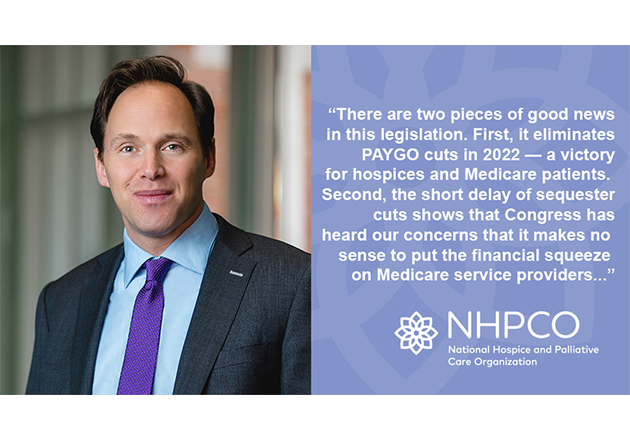 The National Hospice and Palliative Care Organization (NHPCO) commented on Congressional efforts to address two different cuts to Medicare that are pending for 2022, noting the measure moving through the House of Representatives meets some of the concerns NHPCO has raised, while only partially addressing others. The legislation, introduced in the House of Representatives today as the “Protecting Medicare and American Farmers from Sequester Cuts Act” (amendment to S. 610), will address PAYGO statutory cuts of up to four percent to Medicare and will provide short-term, temporary relief for two-percent sequestration cuts called for by the Budget Control Act of 2011. The proposal would replace a two-percent sequestration cut starting in January with a one-percent cut starting in April and a two-percent cut starting in July.

“There are two pieces of good news in this legislation. First, it eliminates PAYGO cuts in 2022—a victory for hospices and Medicare patients. Second, the short delay of sequester cuts shows that Congress has heard our concerns that it makes no sense to put the financial squeeze on Medicare service providers in the middle of an ongoing pandemic Public Health Emergency, a challenging economy, and a healthcare workforce shortage. That said, the changes do not address the structural challenges providers face,” said Edo Banach, NHPCO President and CEO. “The hospice community is cautiously optimistic that this is only a stop-gap measure—we will continue to work with Congress to ensure long-term relief on sequestration.”

“Beyond the legislation currently on the floor, it’s important to understand that this debate about sequestration cuts to Medicare never ends. In other words, legislation passed ten years ago in an attempt to address the rising costs of healthcare failed to reach that lofty goal, and now it threatens the wellbeing of vulnerable Americans who are dependent on Medicare,” continued Banach. “The fact that we keep having this debate shows that annual, automatic, two-percent cuts based on ten-year-old thinking have done nothing to address the core issues. It’s time for Congress to do away with the sequester and instead rethink an approach to controlling the factors that drive the cost of healthcare in this country. The hospice community can be a great resource in that process. Hospice is the only health care sector that simultaneously delivers exceptional value and saves Medicare dollars. NHPCO and our members will continue educating our contacts in Congress as the country works to ensure long term stability of Medicare.”