Care Music Therapy: More Than ‘Music to Your Ears’ - ehospice

Music Therapy: More Than ‘Music to Your Ears’ 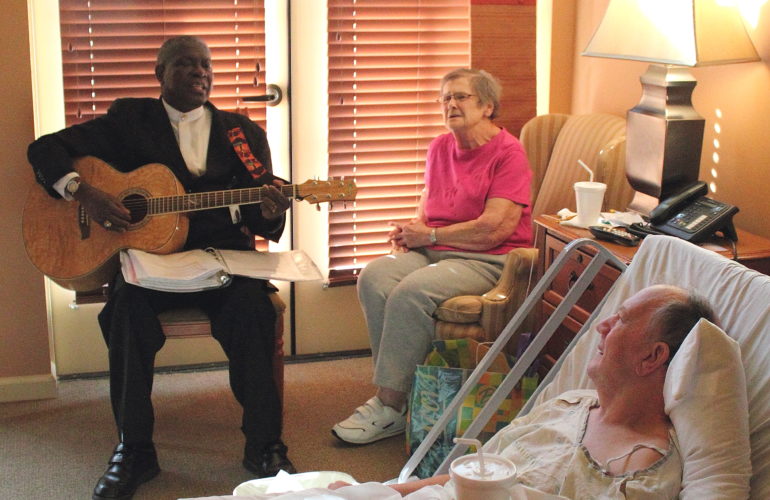 Thanks to devices like the smart phone and iPod, music is part of our daily lives. It’s also used by medical practitioners to help us relax, and by retailers to uplift our spirits and prime us for purchases we may not need. But music therapy, when provided by a board-certified music therapist, is far different — and its impact can be far more powerful.

For patients at the end of life, it can help them manage physical pain, express buried emotions or feelings they can’t otherwise articulate, and find peaceful closure. It’s also an effective tool in bereavement counseling as families adjust to the loss of a loved one. For these very reasons, some hospices offer music therapy as part of a patient’s plan of care and in the bereavement services they offer to the patient’s family.

The type of therapy or technique that music therapists use when working with a hospice patient or family very much depends on the person’s needs, preferences and goals. In fact, this individuation is what distinguishes music therapy from “music medicine” or “passive listening” where, for example, a healthcare professional might play pre-recorded music to relax a patient before a medical procedure.

The techniques used in end-of-life care include:

For 76-year-old Eric J, a patient with stage 4 lung cancer, it was songwriting that helped him find peaceful closure, recalls Hicks.

Mr. J lived alone and, aside from a positive relationship with one daughter, he was estranged from his family due to the life choices he had made and some conflicts over the years. As he began to process his declining health, he spoke to the hospice staff about his regrets and the desire to let his family know that “he had done the best he could.” This prompted the staff to suggest music therapy as a tool to help him express his feelings.

Following a formal assessment over the course of two visits, Hicks felt music therapy could be beneficial to Mr. J.

“During our second visit, I played some of Mr. J’s favorite country songs and asked him if he’d like to create lyrics of his own for one of the songs, but that didn’t resonate with him. It didn’t fit his emotional and spiritual needs,” she said. “But on our third visit, when I introduced the idea of writing his own song, he perked right up.”

Over the course of three more sessions, he and Hicks brainstormed on what the song should contain — what the lyrics and chorus should say, and what the style and tempo should be. “He chose a country ballad. I provided choices for the melody, and we wrote the first verse and part of the chorus. He then asked me to finish the piece for him,” she explained. “On the fifth visit, I played the completed piece and he felt it was exactly right.”

Hicks made several copies of the recorded song so Mr. J could share them as he wished. He and his daughter listened to the song together, and he sent copies to other members of his family that he had not seen in years. The song was also played at his funeral.

Mrs. L was very dependent on her breathing aids, using breathing treatments twice a day and supplemental oxygen through a nasal cannula as needed. Despite knowing these supports were available, she would become very anxious as soon as she encountered difficulty breathing. This, in turn, caused her physical pain.

Initially, Mrs. L. didn’t believe that listening to music could control her anxiety, but after several weeks of practicing some relaxation techniques with a music therapist, she began to see its value. She and her music therapist selected three specific recordings and established a relaxation schedule, requiring that she listen to the recordings and practice the relaxation technique after each breathing treatment. In two short weeks, she had experienced remarkable improvement. Not only did she see a notable decrease in the number of her anxiety attacks, she also experienced fewer bouts of difficulty breathing. She also became creative in her practice, choosing the recording that seemed to fit her mood at the time. As her music therapist had observed, the practice not only helped reduce her physical pain, but helped her feel empowered — and more in control of her life.

How Do You Locate a Hospice that Provides Music Therapy?

Most hospices that offer integrative or complementary therapies — such as music, massage and art therapies — list them as an available service on their website.  Patients and families can also inquire about the availability of services during the hospice admissions process.

To find hospices that serve the area in which a patient lives, use the “Find a Provider” search directory on the website of the National Hospice and Palliative Care Organization, or simply conduct an Internet search for ‘hospices serving [city/state or zip code].’

Sue Canuteson in based in Alexandria, Virginia and writes on end-of-life care.

Another article of interest is available on ehospiceUSA, “What a patient’s artwork can tell us.”