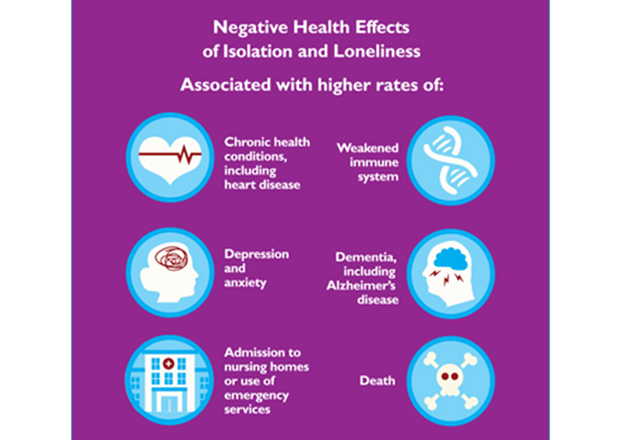 The National Association of Area Agencies on Aging (n4a), in collaboration with AARP Foundation, launched a national public education campaign to raise awareness of the growing problem of social isolation and loneliness in older Americans. It is estimated that one in five people over age 50 are affected by isolation, a problem that has been associated with higher rates of chronic disease, depression, dementia and death.

This topic is the focus of the annual Eldercare Locator Home for the Holidays Campaign, developed to encourage discussion of important issues affecting older Americans at a time of the year when family and friends often gather together. The Eldercare Locator is funded by the Administration for Community Living.

“Efforts to strengthen the health and well-being of older Americans must address the critical issue of isolation. It is a major risk factor for elder abuse,” said Edwin Walker, Acting Assistant Secretary for Aging and Acting Administrator, Administration for Community Living. “We hope that this campaign will raise awareness about this important issue and spur efforts to prevent isolation and promote community connections.”

The national network of 622 Area Agencies on Aging (AAAs) and the more than 250 Title VI Native American aging programs, providing crucial home and community-based services and supports for older adults in virtually every community in the nation, is uniquely positioned to shine a light on this growing problem and to lead the way in finding solutions.

“Because these agencies are on the frontlines of helping older Americans live with dignity and independence in their homes, connecting them to an array of in-home services so vital to their well-being, they are often the first to realize that an older adult is isolated and lonely.” said n4a CEO Sandy Markwood. “That’s why we believe their participation in this campaign can have such a major impact.”

Agencies interested in participating in the campaign will receive resources to help them spread the word including the publication: “Expand Your Circles: Prevent Isolation and Loneliness As You Age.” Prior to the campaign launch, n4a was contacted by AAAs nationwide who wanted to join the effort.

“Our agency-funded providers deliver millions of meals to older adults who may otherwise go without food or companionship, so we see the problem up close every day,” said New York City Department for the Aging Commissioner Donna Corrado. “This campaign will help raise awareness and support our ongoing efforts to identify and help those in need.”

In addition to support for the Home for the Holidays Campaign, n4a and AARP Foundation, along with several other organizations, have formed Connect2Affect (connect2affect.org). The collaborative effort features tools and resources to help evaluate isolation risk, reach out to others who may be feeling lonely and disengaged, and find practical ways to reconnect to the community.

Lisa Marsh Ryerson, president of AARP Foundation, said, “With data showing that the health risks of prolonged isolation are equivalent to smoking 15 cigarettes a day, it’s crucial that we not only build awareness about social isolation as a public health issue, but also identify solutions.”

About the Eldercare Locator
Administered by n4a, the Eldercare Locator is the only national information and referral resource to provide support to consumers seeking assistance across the spectrum of issues affecting Americans. Through its National Call Center (800.677.1116), which operates five days a week from 9:00 a.m. to 8:00 p.m. ET, and website (www.eldercare.gov), the Locator serves as a trusted gateway for older adults and caregivers searching for information and resources which can be crucial to their health, well-being and independence.

About n4a
The National Association of Area Agencies on Aging (n4a) is a 501c(3) membership association representing America’s national network of 622 Area Agencies on Aging (AAAs) and providing a voice in the nation’s capital for the 256 Title VI Native American aging programs. The mission of n4a is to build the capacity of its members so they can better help older adults and people with disabilities live with dignity and choices in their homes and communities for as long as possible.

About AARP Foundation
AARP Foundation works to ensure that low-income older adults have nutritious food, affordable housing, a steady income and strong and sustaining bonds. We collaborate with individuals and organizations who share our commitment to innovation and our passion for problem solving. Supported by vigorous legal advocacy, we create and advance effective solutions that help struggling older adults transform their lives. AARP Foundation is the affiliated charity of AARP.