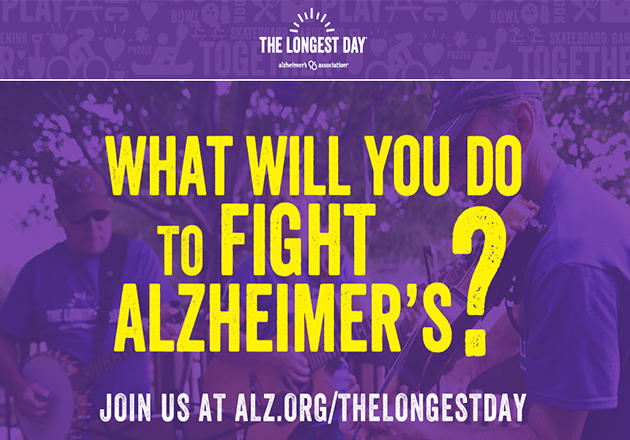 June is Alzheimer’s & Brain Awareness Month®, and the Alzheimer’s Association® together with advocates in the early stages of the disease are encouraging families to talk about memory and cognition concerns sooner. These advocates know first-hand that an early diagnosis offers many benefits, including access to more effective medical and lifestyle interventions and the ability to take an active role in planning with family members for the future.

“Denial and rationalization are common responses to the early signs and symptoms of Alzheimer’s – it was a part of my experience,” said Darrell Foss, a member of the Alzheimer’s Association’s Early-Stage Advisory Group, which is composed of people in the early stages of Alzheimer’s disease. “Too often, people experiencing symptoms, or family members seeing them, wait to speak up, even when they know something is wrong. It can be scary, but that is why I’m sharing my personal experience – to illustrate why talking about Alzheimer’s concerns early is so important.”

To help people understand early symptoms of Alzheimer’s or behaviors that merit discussion, the Alzheimer’s Association offers 10 Warning Signs. Should these signs appear, it is important to talk about them with the person experiencing symptoms and encourage them to speak with a medical professional.

“Unfortunately, people often avoid conversations due to denial, fear, anxiety, lack of awareness and difficulty having hard conversations about health issues, particularly with Alzheimer’s or other dementias due to stigma and perceptions associated with the disease,” said Ruth Drew, Director of Family and Information Services for the Alzheimer’s Association.

New findings from an Alzheimer’s Association survey found a majority of Americans would be concerned about offending a family member (76 percent), or ruining their relationship (69 percent), if they were to approach that person about observed signs of Alzheimer’s. More alarming, 38 percent said they would wait until a family member’s Alzheimer’s symptoms worsened before approaching them with concerns. Additionally, nearly 1 in 3 Americans (29 percent) would not say anything to a family member despite their concerns.

To help families overcome common communication obstacles, the Alzheimer’s Association is offering 6 Tips for Approaching Alzheimer’s, a list of best practices for talking about the disease with someone who may be experiencing symptoms. These include:

For more on these tips, go to alz.org/6Tips.

“We know that initiating conversations can be difficult; these tips are aimed at making a discussion about Alzheimer’s less daunting and more productive,” said Drew. “We also know from talking to families that, while individuals may wish they didn’t have Alzheimer’s or another form of dementia, they never regret being able to prepare for the future, play an active role in their own financial and care planning, and make their wishes known to their family members.”

Understanding the Value of an Early Alzheimer’s Diagnosis
There are many medical, financial, emotional and social benefits to receiving an early Alzheimer’s diagnosis – both for those living with the disease and their families. These include:

Mary Tarbell, 66, an Alzheimer’s Association Early-Stage Advisor who was diagnosed with Alzheimer’s disease in 2016, said getting her diagnosis has helped refocus her priorities.

“Learning I had Alzheimer’s was painful,” said Tarbell. “But getting an early diagnosis has given me the chance to make informed decisions about the future with my family. My husband and I are using this time to plan some vacations and do the things we want to do while we still can.”

Living with Alzheimer’s
In addition to encouraging families to talk about Alzheimer’s openly and to seek diagnosis earlier, Alzheimer’s Association Early-Stage Advisors are sharing their stories about life after an Alzheimer’s diagnosis, including steps individuals can take to move forward and live their best lives.

“Many see Alzheimer’s disease as the end of life and, while there is currently no cure, living with the disease is a complex experience that often runs the course of many years,” said Pam Montana, an Alzheimer’s Association Early-Stage Advisor who was diagnosed with Alzheimer’s disease in 2016 at age 61. “It is so important for me to encourage others with a diagnosis to stay active and engaged as long as possible. I encourage people to seek out life-affirming moments. For example, I’m an advocate for the cause, it is important for me to face this disease and share my story while I’m able, and that leads to an enormous sense of accomplishment, even with this extremely difficult diagnosis. I want to tell these stories and let others know they are not alone.”

In addition, the Alzheimer’s Association helps families and friends navigate challenges and considerations at each stage of the disease, through face-to-face conversations with experts in local communities, our free 24/7 Helpline (800.272.3900) and comprehensive support and resources on alz.org.