In The Media Pets, peace of mind, & the end of life - ehospice

Pets, peace of mind, & the end of life 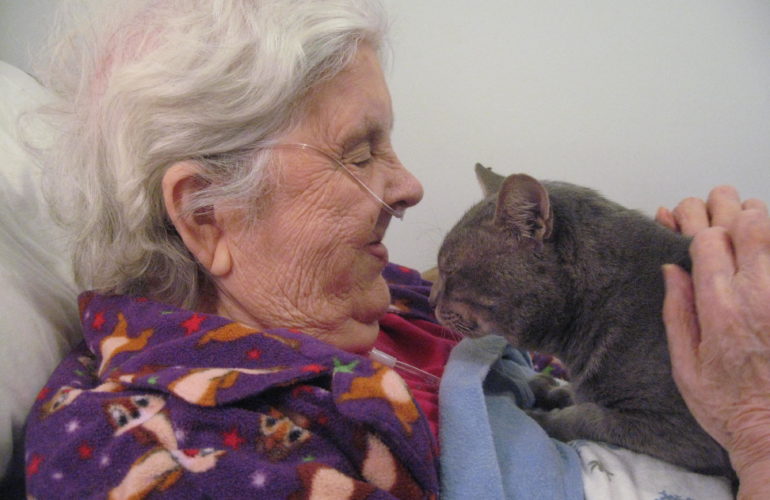 But when a person goes under hospice care, sometimes no one is able to care for the family pet. This week on “Take Care,” Dianne McGill explains a program she founded called Pet Peace of Mind, which allows hospice patients to keep their pets and spend time with them.

The bond between a human and their pet can be a very powerful thing. McGill tells the story of a man who was very ill and in hospice care. He had a dog, and when he became too sick, could no longer take care of the dog. His wife, was also elderly and busy taking care of him, and not capable of caring for the dog, so it was eventually given to a shelter.

Once the dog was gone, the man’s health began to decline even further. He would sit in front of the TV and pet a dog that was no longer there. Shortly after, the man died.

Stories like this are what compelled McGill to start Pet Peace of Mind. The program was founded in 2009, now reaches 44 states, and is available to any non-profit hospice care center in the nation.

“After much research, talking to hospices all over the country, we discovered that there indeed was a very significant gap in that care,” McGill said. “We founded the program as an answer to a very big missing space in that service gap for patients at end of life.”

Much of this gap may have stemmed from a lack of understanding the love a person can have for their pet, McGill said. Pet Peace of Mind is designed to help with this — so if those involved in caring for a hospice patient aren’t pet lovers, there’s another option.

“This isn’t an evangelistic program that wants everyone to be pet lovers—there will just be people that don’t. But the point Pet Peace of Mind seeks to instill in everyone’s mind, is that this is not about anyone except what the patient wants,” McGill said.

Pet Peace of Mind is able to help hospice patients keep their connection with a variety of pets. Aside from cats and dogs, McGill says the program has helped with horses, birds, fish, and even a tarantula.

McGill tells the story of a more unusual pet the program has helped, when a man wanted to say goodbye to his three horses. He thought of these horses as his children and was worried they would wonder why he left and never came back. The hospice team got permission from the doctor to move the man down to the first floor, where the window was removed from his room. The horses were then brought to the hospice house so he could spend time with them while still remaining under hospice care.

“He died, of course, with a very big smile on his face and lots of peace in his heart,” McGill said.

Along with allowing hospice patients to spend their last days with their pets, Pet Peace of Mind also helps find pets a good home after their owner has died. McGill says many hospice patients who are very bonded to their pets, will often not let go and pass on until they know there is a suitable, loving home their pet will be going to.

Pet Peace of Mind is a volunteer program that focuses on three main points, McGill says. The first is making sure a patient’s pet gets face-to-face care and their daily needs are fulfilled. The second is assisting the patient financially for food and other essentials the pet may need. Lastly, is finding a new home for the pet after the patient’s death, which is really what draws hospice partners to the program, McGill said.

All hospice volunteers that participate with Pet Peace of Mind go through a training period, and once a plan is in place, McGill says the program gives the hospice care center start-up funding for the first year. Then within this year, the program teaches hospices how they can raise money to sustain their funds after the year is up.

“There’s never one-size-fits-all. There’s not a single hospice in our network that’s obligated to offer all of the services Pet Peace of Mind can do. They decide what they need and what they have the capacity to support with volunteers in their own communities,” McGill said.

Pet Peace of Mind has brought awareness to the difference having a pet around can make to a hospice patient. It may have even brought about a new perspective on hospice care.

About Take Care
A weekly conversation on health and wellness, Take Care draws upon the expertise of both regional guests and the country’s leading authorities on medicine, technology, psychology and human behavior, health care, and public policy. Hosted by Lorraine Rapp and Linda Lowen, Take Care explores a variety of topics that impact our lives and our choices in treating illness and enhancing wellness.