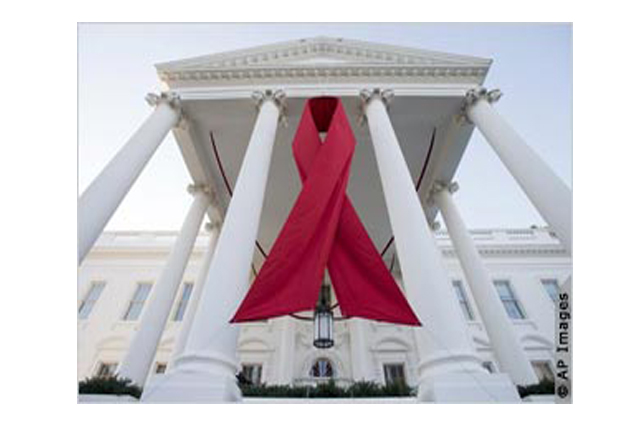 December 3, 2013 | No Comments
Categories: In The Media.
[U.S. Department of State –  Washington] — At a White House World AIDS Day event December 2, President Obama promised new U.S. assistance to fight the disease, saying the more others contribute to the cause, the more the United States will contribute to better health worldwide.

Representatives from other donor nations and the international AIDS relief community heard the commitment. They are in Washington December 2–3 for a meeting about renewing financial pledges to the Global Fund to Fight AIDS, Tuberculosis and Malaria.

Obama promised that the United States will contribute $1 for every $2 pledge made by other nations over the next three years, up to $5 billion. “Don’t leave our money on the table,” Obama said, challenging ministers attending the event who represent other nations. He commended nations that carry the heaviest disease burden for the stepped-up investments they are making to address the epidemic.

“That ought to inspire all of us to give more, to do more, so we can save more lives,” Obama said.

The commitment for matching funds was greeted by applause in the midst of otherwise solemn remarks, in which Obama recalled the dark, frightful years of the early epidemic when young adults were dying rapidly and mysteriously.

Nothing will ever reverse those losses, Obama said. “But what we can do, and what we have to do, is chart a different future, guided by our love for those we couldn’t save. That allows us to do everything we can, everything in our power, to save those that we can.”

Secretary of State John Kerry was another speaker at the White House event with sharp memories of the helpless dismay that pervaded the public in the early years when the the disease seemed like an imminent death sentence. Kerry was a U.S. senator and recalled how members of Congress set aside political differences to face the crisis and take action on HIV/AIDS.

“We all managed to be able to find a way for this issue to unite us,” Kerry said. “”In our collective refusal to allow AIDS to ravage yet another generation, we showed a deeper determination to meet our global responsibilities.”

The U.S. Congress has continued that tradition with recent passage of a bill that continues funding for the U.S. President’s Emergency Plan for AIDS Relief (PEPFAR), the 10-year-old U.S. program that has provided treatment for 6.7 million people in hard-hit countries worldwide. President Obama said he intended to sign that bill into law as he left the December 2 event.

Obama said he also hopes that the U.S. global AIDS coordinator and representatives of other donor nations and international organizations will be able to meet early in 2014 to agree on new goals for increasing the numbers of people receiving lifesaving treatment and prevention services. Through intensive prevention and treatment efforts, the United States and international partners hope to achieve an AIDS-free generation in the near future.

The Global Fund to Fight AIDS, Tuberculosis and Malaria came together in 2002 as a coordinating agency for international funding to address the three diseases. The government and private-sector donors who contribute to the Global Fund have provided $28 billion over the last decade. They convene in Washington December 2–3 for a “replenishment conference” to challenge each other to increase their assistance to end disease.

The last replenishment conference in 2010 won commitments of $9.2 billion. Dr. Mark Dybul, executive director of the fund, expressed confidence in late November that donors attending the 2013 meeting will exceed that level of commitment.

The Geneva-based agency is involved in health programs in 140 nations. The Fund’s work complements that of PEPFAR, also launched about a decade ago. Through these two efforts, with contributions from many other donor nations, nongovernmental organizations, philanthropists and host governments, about 10 million people are receiving treatment for the disease.

President Obama also announced that the United States is investing $100 million in research on a potential cure for AIDS to achieve long-term remissions and stop the need for lifetime treatment.