Care Program for the love of pets - ehospice

Program for the love of pets 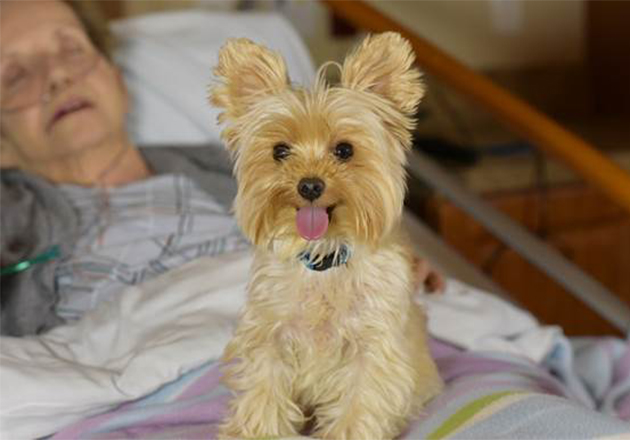 Sharon Shinkle’s dogs, miniature Yorkshire Terriers named Shelby and Yogi, meant the world to her; they were a constant presence in her life.  In the beginning of 2016, Sharon began receiving hospice care and her illness left her unable to care for her beloved dogs leaving her feeling extremely distressed.  Her illness took a turn for the worse and she was admitted to the North Pinellas Care Center, part of Suncoast Hospice in Palm Harbor, Florida.  It was there that she expressed her concern for her dogs –temporarily staying with close friends- to her care team.  They were part of Sharon’s family. Luckily the organization has a Pet Peace of Mind program and was able to help Sharon, Shelby and Yogi.

Sharon shared her concern that the dogs hadn’t been groomed in some time.  Alicia Lawler, Senior Volunteer Coordinator and Pet Peace of Mind Program Coordinator assured Sharon  that PPoM would be able to get the dogs groomed.  She also took this opportunity to find out if Sharon had a plan for Shelby and Yogi after she died.

“Part of the Pet Peace of Mind program is to determine what happens next when a patient either can no longer take care of their animals or if they pass away,” says Alicia.

Sharon was very realistic about the time she had left and had arranged for her sister Diana to take the dogs after she died.  She was comforted knowing that Diana, who also has a miniature Yorkie, would be there for the dogs and give them the same love and care that she provided.

Sharon’s family arranged to have Shelby and Yogi visit her at the care center as often as possible. Her final visit with the dogs was filled with joy, laughter, and love.

The video below is part of the Moments of Life: Made Possible by Hospice campaign to help people understand the many things that hospice and palliative care can do.

PPoM ensured the dogs were groomed and examined at the veterinarian and received their updated vaccinations before they went to their new home in Ohio.