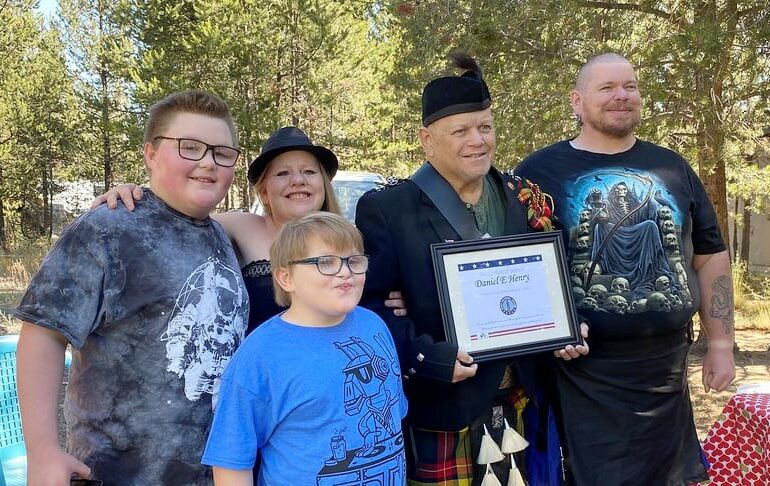 Photo: Dan and his family being recognized by Heart ‘n Home Hospice.

Even during a public health crisis, hospice and palliative care professionals rise to the challenge of providing compassionate, person-centered care in the community. Heart ‘n Home Hospice shares how they were able to safely and respectfully honor one of their Veteran patients, who was also one of their Veteran volunteers.

On a beautiful summer morning, surrounded by the pine trees of La Pine, Oregon, we had the great pleasure to honor local Veteran Dan Henry for his service to our country. Dan was a bagpiper for the Oregon Army National Guard for 9 years. Dan, deservingly, is very proud of serving his country through the Army National Guard.

Taking this time to recognize Dan, in this special ceremony, was made more meaningful because of his previous involvement in recognizing other Veterans. Dan, as a member of the Band of Brothers and a Volunteer with Heart ‘n Home, has helped at numerous Veteran Pinnings. He also proudly volunteered to serve in his community before he became ill. Because he has given so much of his time in service of others, it was a pleasure to take this time to honor him.

Decked out in his full kilt and uniform, Dan stood proud for a photo. “Not only does Dan have stories about his time in the Guard and as a local firefighter, but his uniform itself tells a proud story of service, honor, and loyalty,” Heart ‘n Home Care Navigator Mandy Putzier said. For example, the kilt he dons is his family tartan, and the bear hackle on his hat was awarded by the Clan Buchanan of Willamette Valley Bagpipe Association due to his abilities as a bagpipe player.

Dan’s family attended the ceremony which honored his service. Unfortunately, with COVID-19 restrictions his fellow Volunteers and Band of Brothers were unable to attend, but we’re sure they would have if possible.

With each part of his uniform in place, Dan humbly accepted a card from the whole hospice team and a certificate is presented to him. Along with the certificate, an American flag pin was pinned to his lapel by Mandy. He was comforted by his RN, Case Manager Billy, and his daughter Jennifer as he shed tears of honor. Heart ‘n Home employees Russell, Elizabeth, and Billy also took part in the presentation. Then, Dan stood with Executive Director Diana and saluted the flag.

Two patriotic pillowcases were also presented to Dan. They were sewn with care by Mandy. Many people in the La Pine area have a great love for quilting and sewing. These pillowcases not only provide comfortable place to lay his head, but will serve as a daily reminder of our appreciation of Dan’s service.

Heart ‘n Home proudly honors not only our Veteran patients, but all Veterans. It was truly our pleasure to recognize someone so dear to us. Dan has done his part to recognize many other Veterans, we were happy to return the favor.

“Dan is pretty special to our team so it means a lot to us that we can do this for him,” Mandy said. “A picture can tell a thousand words…and in Dan’s case the picture of him in his kilt receiving his Veteran certificate, presented by his Heart ‘n Home care team, surrounded by his family tells a lifetime of stories.”

This piece originally appeared on the NHPCO Blog page, as part of its Faces of Caring campaign. If you would like to share the creative ways your hospice and palliative care team is caring for patients amid the COVID-19 crisis, please send NHPCO your photos and stories so you can be featured in the #hapcFacesOfCaring campaign.