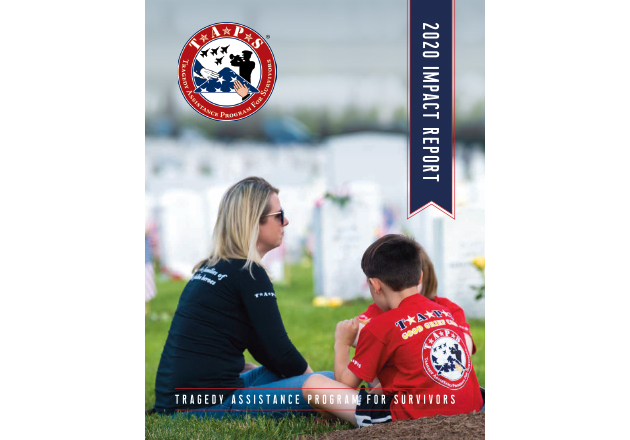 The Tragedy Assistance Program for Survivors (TAPS) is proud to announce the release of the 2020 Impact Report. For nearly three decades, TAPS has provided hope, healing, and resources to all those grieving the death of a military loved one. TAPS has responded and adapted throughout 2020 to continue providing essential grief services to military loss survivors.

In 2020, the Tragedy Assistance Program for Survivors, welcomed an average of 21 new military survivors each day. This report highlights the impact TAPS has had on more than 100,000 military loss survivors across generations and through various programs and services.  TAPS also launched a new initiative by sharing a variety of meaningful and hand-selected resources with the American public to support all living with fear, grief, depression, and isolation in the wake of COVID-19.

“Our TAPS 2020 Impact Report shares our mission, and reflects the continued and growing need to provide care and resources to all those grieving the death of a military loved one,” stated Bonnie Carroll, TAPS President and Founder.

TAPS Chairman of the Board, and CEO of Telos Corporation, John Wood, stated, “I continue to be in awe of the resilience of the military survivors who TAPS serves…If you have not yet been able to learn more about the life-saving resources of TAPS, I personally extend the invitation to you.”

Throughout 2020, TAPS received top ratings among charity watch groups and remains committed to fiscal integrity. In 2020, 0.88 cents of every dollar provided direct and immediate support to military survivors. TAPS has provided free programs and services for over 100,000 surviving loved ones of America’s fallen heroes.

To request more information about TAPS, please visit the website at TAPS.org.

ABOUT TAPS
The Tragedy Assistance Program for Survivors (TAPS) is the national organization providing compassionate care for the families of America’s fallen military heroes and has offered support to more than 100,000 surviving family members of our fallen military and their caregivers since 1994. TAPS provides peer-based emotional support, grief and trauma resources, grief seminars and retreats for adults, Good Grief Camps for children, case work assistance, connections to community-based care, online and in-person support groups and a 24/7 resource and information helpline for all who have been affected by a death in the Armed Forces. Services are provided free of charge.