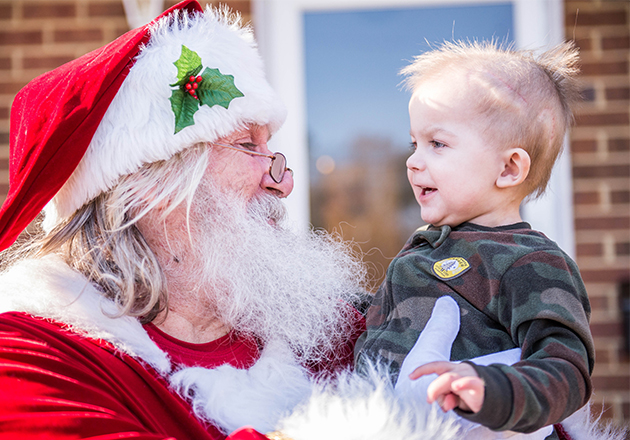 Santa and his elves arrived a bit early (by way of fire engines and police cars) in Virginia this year to spread holiday joy to some very special children and their families.  Edmarc Hospice for Children is on a mission to ensure that the 80 kids and families they care for are able to enjoy the holidays and time with their loved ones. The “Santa Run”, organized annually by the hospice in Portsmouth, Virginia, was held on December 13; it was by all accounts, “the best day ever.”

For families of children suffering from a life-threatening illness, the holidays can add an extra layer of strain that can quickly diminish the joy of the season and take away precious time that could be spent with their little ones.  “Shopping during the holidays is stressful enough, but just think what it would be like if you had a child that is sick and in a wheelchair,” comments Edmarc Hospice for Children’s Executive Director, Debbie Stitzer-Brame. “Not to mention, that many families have countless doctors’ appointments and trying to cram in shopping, too, simply adds to an already stressful situation to families.”

Each year, more than 100 volunteers from the community come together to complete the “Santa Run”.  The phrase ‘Christmas in July’ has great relevance for the Edmarc team because planning for the event begins in the height of the summer.  “It takes nearly the entire staff to collect the children and family wish lists,” says Debbie.  And with a staff of 14, this can be a daunting task. This year, Santa and his elves used a bit of an alternative method of transportation for delivering presents.  With the help of local fire/rescue and police, the children and their families were greeted with lights and sirens from fire trucks and police cars.

For some of these youngsters, the gifts they receive from the “Santa Run” will be the only presents they receive for Christmas.   The financial strain of coping with a terminal illness can take a tremendous toll on families.

And as part of this effort, Santa comes even earlier for children who are rapidly declining. Debbie recounts a very special moment of a child who had a visit from Santa in November:

Last evening, Santa Claus, three Edmarc volunteers and I went caroling to the home of six year old Kaiden and his family.  I know what you are thinking…it’s not even Thanksgiving and it is much too early to be celebrating Christmas.  No…not really, not at all under these circumstances.  You see, Kaiden is very sick right now.  He has cancer and is at a particularly low point in his treatment and unable to move about very well on his own.  When we arrived, he was sitting propped up on the sofa.  It took everything inside him just to keep sitting up.  But he beamed the moment he laid eyes on Santa.  His bright shining brown eyes seemed huge in contrast to his shiny bald head, having lost its cover to chemotherapy.  He seemed overwhelmed by the thought that Santa had actually come to see him in person.  Kaiden was so excited by the gifts he received that he even tried to help Santa pile them up next to him.  It was a magical moment to see Santa lying next to him on the sofa as he sweetly whispered, “thank you Santa for coming to see me and my family too, Christmas is right around the corner.”  As I looked over to our volunteer who had transformed himself into Santa, he had a tiny tear in his eye.  It was evident the spirit of the season was all around us.

What Edmarc is providing to their children and families goes beyond giving gifts wrapped in shiny, colorful paper.  They are bringing joy into homes where stress and sadness can be overwhelming.  For one brief moment, these children stricken with illness get to be normal kids, thrilled to see Santa and enjoy the excitement of the season.  And their families have been given the greatest gift of all – precious moments that will live in their hearts and minds forever.