Care The situation with children, adolescents and AIDS - ehospice

The situation with children, adolescents and AIDS 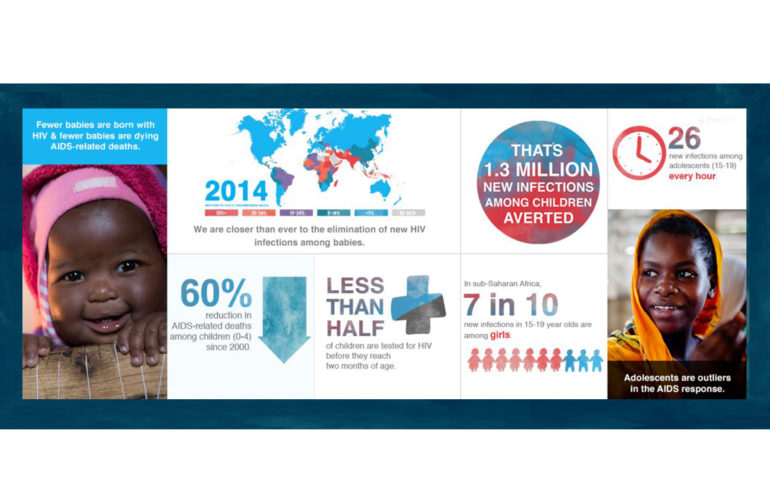 At the turn of the century, and the beginning of the Millennium Development Goals, an HIV diagnosis was equivalent to a death sentence for most children and their families in low income countries. But now, an early diagnosis paired with treatment and care can ensure long healthy lives, regardless of location, and helps prevent transmission of HIV to others.

Today, 1 December 2015, is World AIDS Day and this statement appears on the front page of a UNICEF website looking at ‘What we know on Children, Adolescents and AIDS’. UNICEF reports that in 2014 there were 4.6 million children living with AIDS broken down into 2.6 million children aged 0 – 14 years and 2 million adolescents aged between 15 – 19 years.

Encouraging news
It is encouraging to note the progress that has been made in reducing vertical transmission from mother to child worldwide and that there has been a 60% reduction in AIDS-related deaths among children between 0 – 4 years old since 2000. Fewer babies are born with HIV and fewer babies are dying AIDS-related deaths and we are closer than ever to the elimination of new HIV infections among children. The global AIDS response has meant that 1.3 million new infections have been averted among children in the 0 -14 year age group since 2000 and today most pregnant women living with HIV in low-and-middle-income countries receive treatment to remain healthy and prevent transmission of the virus to their babies.

Too few children on treatment
However, lest we are lulled into thinking that the situation is looking good for children, there are an estimated 190,000 new HIV infections among children each year and the alarmingly low number of children on treatment is as little as only 1 in 3. Globally 150,00 children still die each year as a result of this disease.

Additionally, 13.3 million children aged 0 – 17 years old have lost one or both parents to AIDS.

Find out more and download the infographics and charts from http://www.childrenandaids.org/home