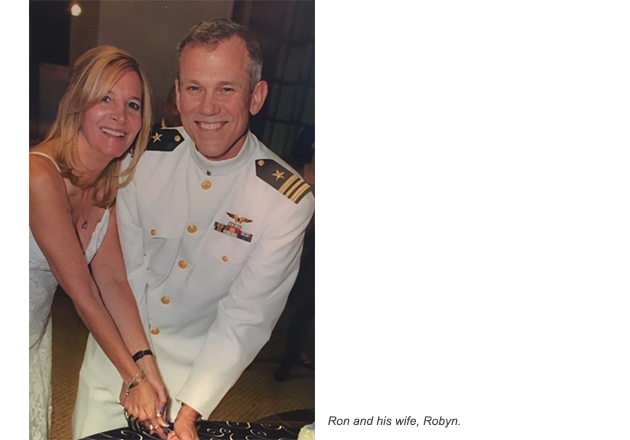 September 27, 2018 | No Comments
Categories: Education and People & Places.
Tags: ALS and Hospice of the Western Reserve.

Sometimes we encounter people stronger than their disease. They leave a lasting impact on the way we live our lives and re-shape our attitudes about what really matters. At Hospice of the Western Reserve, we often find that the patients and families we serve are our most inspiring teachers.

ALS is a progressive disease that affects nerve cells in the brain and spinal cord. There is no cure and the average life expectancy is two to five years. As the illness progresses, it takes away the ability to walk, speak, and eventually, to breathe. As cruel as this disease is, it hasn’t stopped Ron Turney from fighting, advocating for others and doing everything he can to make an impact.

Ron and his wife, Robyn, live in Twinsburg. In 2014, Ron was diagnosed with ALS (Amyotrophic Lateral Sclerosis), also known as Lou Gehrig’s Disease. Recently, as Ron’s illness has progressed, he has been receiving care and support at home from Hospice of the Western Reserve’s Summit County team, including RN Stacy Kreps, Social Worker Jackie Kelly and Hospice Nursing Assistants Annie Franklin and Judy Aiello. The team’s specialized knowledge and skill in symptom management and experience in working with patients with advanced ALS will help Ron and support his family in the days ahead. Ron also has a long-time private caregiver and support provided under his veteran’s benefits from the VA.

“Ron inspires me,” said Stacy. “His strength and his ability to think about others while facing down a disease that drives most people to be self-focused is extraordinary. Last week, I was honored to accompany Ron while he achieved his goal of participating in an ALS fundraising walk at Baldwin-Wallace. This was something very meaningful for him. Although he knew it would be his last walk ever, he mustered the strength and determination to participate.”

Said Ron: “Of all the people I first met when I learned I had ALS, I am the only one left. I needed to do this. As one of my last official acts, it was important to me to say, “I’m still here. And I’m still fighting. ALS isn’t incurable. It’s underfunded. That’s the problem. The lack of federal funding for research is due in large part to the comparatively small percentage of people who have ALS versus other more widespread diseases.”

“One of the biggest challenges in dealing with this disease is coping with and processing the “new normals” inherent with each step in the decline,” Robyn said. “As Ron has gone from walking to using a wheelchair, from using a wheelchair to being bedbound, from using the trilogy machine only occasionally, to having it on all the time, we have stayed strong as a family and moved forward together.”

As a U.S. Navy veteran who served in the Persian Gulf from 1978 to 1995, Ron was an aviator who flew an EA-6B Prowler, designed to take off from carrier ships and use electromagnetic radiation to jam the radar of enemy aircraft. While Ron is proud of his military service, he believes his continued exposure to radiation was likely a strong environmental factor triggering his illness. “Military personnel have the highest rates of ALS of any profession. Among members of the military, aviators are at the top of the list,” he said. “It’s still not known exactly why, but the causes are believed to be environmental.”

Ron and Robyn have advocated extensively for ALS research and supported numerous fundraising activities. Prior to his illness, Ron was an athlete, swimming in Triathlons. Over the past several years, he has organized five swim-a-thons in his local community to raise funds for ALS research.

“It’s important to do something,” he said. “Be proud. No one can take that away from you. Participate in clinical research trials. Help with fundraising efforts. This disease is curable. Don’t go down in the night without fighting and shouting at the top of your lungs.”

This article was originally published by Hospice of the Western Reserve.