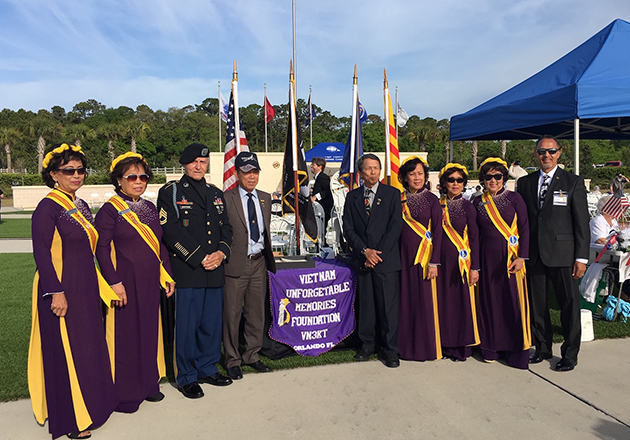 May 31, 2019 | No Comments
Categories: Community Engagement.
Tags: Veterans and VITAS.

Held at the Cape Canaveral National Cemetery along Florida’s Space Coast, the 50th Commemoration of Vietnam Veterans ceremony is part of a national initiative honoring Vietnam-era veterans and families, former prisoners of war, and soldiers still listed as missing in action from the conflict that stretched from 1955-1975.

Fred Robinson, VITAS Healthcare admissions liaison in Central Florida and a former Marine who served during the Vietnam War, was on hand to represent VITAS and reinforce the company’s dedication to veteran-centric, end-of-life care for servicemen and servicewomen.

He also welcomed another group of participants: South Vietnamese women who fled to the U.S. with the help of American soldiers after North Vietnam troops overran their country at the war’s end in 1975. Wearing ceremonial Vietnamese garb, women from the Vietnam Unforgettable Memories Foundation helped distribute 50th-anniversary commemorative pins to nearly 100 Vietnam veterans at the event.

“It’s very humbling to see these women pay their respects to American veterans who defended their country from Communism,” says Robinson, who served as a combat engineer in Subic Bay, Philippines and participated in Operation New Life to assist so-called “boat people,” South Vietnamese refugees who fled to the Philippines.

602 names … and recognition for all

During the event, dignitaries read aloud names of 602 Vietnam veterans who have been buried in the cemetery from January 1, 2018 through March 29, 2019. Kicked off officially in 2012 by former President Barack Obama, the Vietnam commemoration initiative runs through Veterans Day 2025. National Vietnam War Veterans Day is celebrated on March 29.

“I don’t want any Vietnam veteran in this country not to get that pin before they pass,” says Robinson of his fellow veterans. “I want to let them know that it wasn’t all in vain. My goal is for them to smell their roses while they’re still here, not when they’re gone. Even if it’s hours before their last breath, we need to make sure they get the recognition and thanks they deserve.”

When he learned about the Vietnam initiative, Robinson connected with U.S. Army Maj. Gen. Ret. James T. Jackson, director of Vietnam War commemorations in Washington DC, offered his services and successfully established VITAS in Central Florida as a national partner.

Going above and beyond

Robinson also pledged to hold pinning ceremonies for groups of veterans who might not be able to attend events at national cemeteries, “the veterans who are bedside at home, bedside in the hospital, bedside in long-term care facilities and assisted living facilities.”

VITAS in Central Florida—covering Osceola, Seminole and Orange counties—cares on any given day for an estimated 210-260 patients who served in the military. Robinson has trained his hospice colleagues to conduct pinning ceremonies and make sure that all eligible veterans receive the recognition, healthcare and military benefits they deserve.