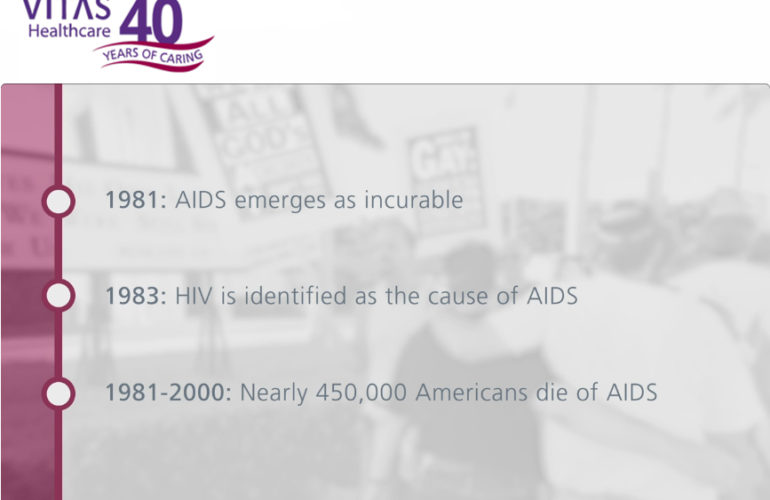 First in a series of videos that look back at the company’s history caring for patients, features VITAS employee accounts of the challenges and satisfaction of caring for AIDS patients in the 1980s–90s

MIAMI, FL – The first in a series of 40th-anniversary videos by VITAS® Healthcare, the nation’s leading provider of end-of-life care, chronicles the personal experiences and memories of VITAS team members who cared for thousands of patients during the HIV/AIDS crisis of the 1980s–‘90s.

In the two-and-a-half-minute video, five veteran VITAS employees detail the challenges, obstacles and satisfaction of caring for patients with HIV/AIDS in South Florida. Until the Human Immunodeficiency Virus (HIV) was discovered as its cause in 1983 and the first antiretroviral drugs were approved in 1987, AIDS was invariably fatal; 450,000 Americans died of the infection or complications from 1981–2000. 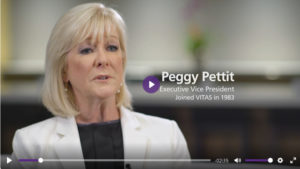 THE ROLE OF HOSPICE DURING THE HIV/AIDS CRISIS

“We were the only hospice in Miami to take on these patients—specialized teams, teams that did nothing but care for AIDS patients,” recalls Nancy Auster, RN, an admissions nurse who joined a dedicated AIDS outreach team in Miami in 1991. “We learned so much about what they needed, and we had some amazing staff that really understood.”

At the time, AIDS patients frequently faced prejudice, fear and the shame and rejection of their own families, according to Peggy Pettit, a team nurse at the time and now a VITAS executive vice president. She describes the immense satisfaction among VITAS hospice teams as they developed protocols and provided direct care—often on streets, in cars or under overpasses—to patients who were homeless or could not receive care in traditional healthcare settings because of stigma and fears associated with AIDS.

“We’d meet them under a bridge at a certain time of the day,” remembers Bob Miller, a former VITAS chaplain who is now executive vice president and chief compliance officer. “The whole team—the aide, the chaplain, the social worker—we’d make our appointment time to meet the patient where the patient was.”

As more was understood about HIV/AIDS over time, VITAS teams created and updated care protocols based on their experiences with patients in community, hospital and inpatient settings. Today HIV is considered a chronic but treatable disease.

VITAS® Healthcare – 40 Years Strong
Established in 1978, VITAS Healthcare is a pioneer and leader in the American hospice movement. Headquartered in Miami, Florida, VITAS (pronounced VEE-tahs) operates 47 hospice programs in 14 states (California, Connecticut, Delaware, Florida, Georgia, Illinois, Kansas, Missouri, New Jersey, Ohio, Pennsylvania, Texas, Virginia and Wisconsin) and the District of Columbia. VITAS employs 12,176 professionals who care for terminally ill patients daily, primarily in the patients’ homes, and also in the company’s 27 inpatient hospice units as well as in hospitals, nursing homes and assisted living communities/residential care facilities for the elderly. At the conclusion of the fourth quarter of 2018, VITAS reported an average daily census of 18,136.