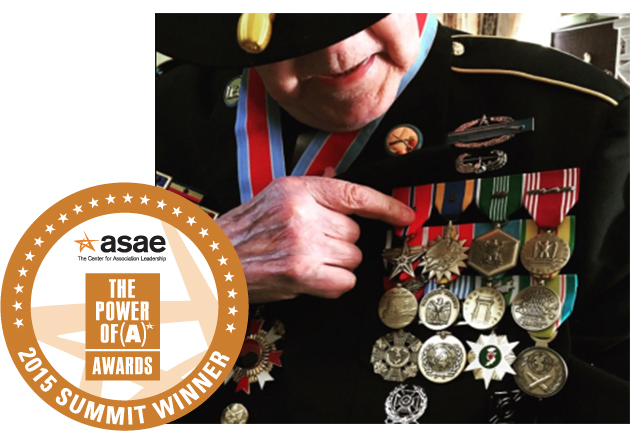 The 2015 ASAE “Power of A Award” has been presented to innovative program, We Honor Veterans.

The Summit Awards are ASAE’s highest honor for associations that have created initiatives and programs that are innovative and exceptional.

We Honor Veterans is a national campaign conducted in collaboration with the Department of Veterans Affairs to engage and support community hospice providers in better understanding and addressing Veterans’ needs at the end of life.

“We are thrilled and honored to be recognized as an ASAE 2015 Summit Award winner,” says NHPCO President and CEO, J. Donald Schumacher. “We thank ASAE for recognizing our continued efforts to improve care for seriously ill veterans who have given so much for this country.”

NHPCO and the Department of Veteran Affairs launched We Honor Veterans in 2010 to address the growing need for veteran-centered care, especially as Veterans are aging and need access to palliative and hospice care.

“The Department of Veteran Affairs and its Hospice and Palliative Care program are basking in the glow of NHPCO’s Power of A Summit Award for the We Honor Veterans campaign,” says Scott T. Shreve, DO, National Director, Hospice and Palliative Care for the Department of Veterans Affairs.  “Partnering to improve the care of seriously ill Veterans has been a wonderful alignment of missions and this award recognizes the efforts of more than 3,000 organizations across the US in honoring and serving those who’ve served.”

We Honor Veterans’ partners address the unique healthcare needs of Veterans, both physical and emotional, including the psychological toll of war and how it impacts their end-of-life journey.  In some cases, Veteran patients are paired with volunteers who have also served their country and share a unique and honorable bond.  Many partners also recognize the military service of Veterans with special pinning ceremonies and awards.

“Congratulations to NHPCO for helping to make the world a better place,” said Hugh “Mac” Cannon, MPA, CAE, Executive Director of ACEC of Metropolitan Washington, and 2015 chair of ASAE’s Power of A Awards Judging Committee. “Their story exemplifies how associations make a difference every day – not just to the industry or profession they represent, but to society at large.”

NHPCO is one of only six associations to receive the award this year. Part of ASAE’s Power of A program, the Summit Awards recognize the association community’s valuable contributions on the local, national and global level. The awards reward outstanding efforts of associations to enrich lives, create a competitive workforce, prepare society for the future, drive innovation and make a better world.

To learn more about We Honor Veterans or to support this important work via a secure, online donation, please visit www.wehonorveterans.org.