In The Media APCA: ‘Use digital media to raise awareness of palliative care’ - ehospice

APCA: ‘Use digital media to raise awareness of palliative care’ 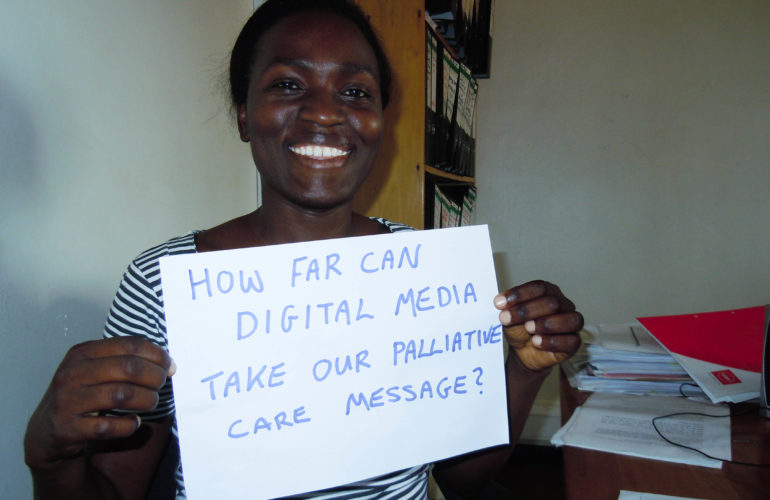 In 2012 the African Palliative Care Association was asked if
they would be interested in supporting the launch of ehospice – an online global news
platform for palliative care. Right from the beginning APCA was excited about being
part of the ehospice project.

Why were we so excited?

Raising awareness of palliative care is one of APCA’s core
strategic drivers. It sits at the heart of what we do. And what better way to
do this than through reaching out, through a global online news platform like ehospice, to tens of thousands of people with our message?

APCA passionately believes more people need to know about
palliative care and ehospice offers a chance to make this
happen.

The first 18 months since the launch of ehospice have already
seen considerable successes.

Of course, as an organization, APCA has to be looking to
reach out to other forms of digital media other than ehospice. To reach out to the
billions of people that we think need to know about palliative care we have to
be casting our net much wider. That is why we have been partnering with some of
our strategic partners to make sure our message is heard.

We are always thinking strategically about the best routes
to reach out to our target audiences. So when we wanted to celebrate the African
Union’s recent commitment to improving palliative care we went straight to The
ONE Campaign with an article.

The ONE Campaign is a ‘campaigning and advocacy organization
of more than 3.5 million people taking action to end extreme poverty and
preventable disease’. What better way to keep the pressure on all African
governments than highlighting the success, and ultimately what still needs to
be done, than to raise awareness of palliative care with their members?

Equally, APCA also tries to raise awareness of palliative
care in Africa with policy makers and stakeholders outside of Africa. There was
a time when this would have been best done by looking to gain access to
traditional print media. However, in countries like the UK the rise of online
policy blogs has resulted in an entire new forum for policy discussion. At APCA
we felt it was important to be part of this discussion.

This is why we went to the widely
read ‘Left Foot Forward’ blog with an article that could hopefully provide
an interesting and engaging introduction to some of the issues impacting on
palliative care provision in Africa.

Through the use of digital media we had an opportunity to
reach thousands of the most influential policy makers in British politics.

We also know that once we start engaging in digital media
the impact we have can ripple far and wide. To give just one example, when APCA
wrote an article for ehospice about the importance of happiness in palliative
care, this was then picked
up on in The Guardian – the third largest online news
source in the world.

As interesting and as well-read our newsletters are, we
could never dream of having that big a reach through traditional outlets.

At the heart of all
of this is our commitment to the patients and their families. We hope that by
raising awareness of palliative care, as effectively as we can, this will have
an impact on their lives.