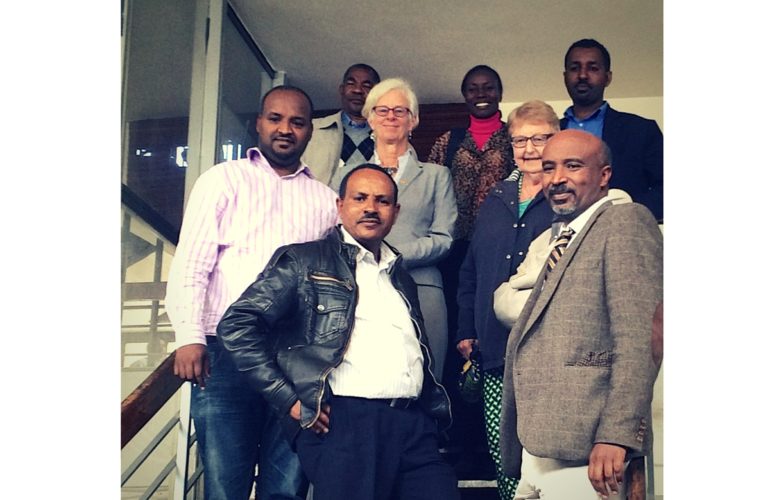 Last week I was in Addis Ababa with Dr. Anne Merriman and Bernadette Basemera of Hospice Africa Uganda, and Dr. Yoseph Mamu of Hospice Ethiopia, to assist the government to develop palliative care and improve access to controlled medicines for the treatment of pain.

One of many productive meetings was with the Interreligious Council of Ethiopia, to introduce them to the work, and explore how Hospice Ethiopia could collaborate with the various faith communities. Mr. Hulluf Weldsilassie Kasha, Vice Secretary General, made us feel welcome with an excellent Ethiopian coffee, and described the mission of the relatively new organisation, founded in 2010, to find and promote areas of common ground between all the faiths of Ethiopia.

The majority of Ethiopians are Orthodox Christian, who were fasting during the week we were there, in preparation for the Orthodox New Year.  Roman Catholic and Evangelical Protestant sects make up the balance of the Christian population, and an estimated 35 percent of the population is Muslim.

When introducing the mission of the Interreligious Council, Mr. Hulluf emphasised the principle at the core of all faiths, the integral dignity of the human person. He said, “human beings are created by the same hand, the same creator, whether or not they are of different faiths. We have the same hopes, the same passions, the same agony,”  And relating that mission to palliative care, which we had described, he said “so your work, your values, are related to ours.”

Dr. Yosef Mamu, one of the only palliative care physicians in the country, and a devout Lutheran, works with the Pain Free Hospitals Initiative at the Ministry of Health. He described palliative care’s holistic approach to disease as spiritual, social, and clinical, expressing his desire to work with religious leaders to show that faith and medicine can be mutually synergistic, and that there is no contradiction between the two.

In her introduction, Dr. Anne, a former Medical Missionary of Mary  told the group how she had brought palliative care to Africa many decades ago to help patients “to be at peace with their God and their family before they die.”

“Because that requires excellent pain management, we brought in oral morphine.  Once pain is controlled you can look at other symptoms and people can prepare for life after death. At Hospice Africa, we don’t impose a religion on people. We try to pray with them using their own conception of God.  Spirituality is a big thing in all African countries, and people’s relationship with God increases as they are dying, no matter what they have done in their life,” Dr. Merriman said.

The Commission has eleven regional offices, as well as a peacebuilding department, which conducts programs for youth and women’s involvement.  They developed a peacebuilding training manual in 2014, and hold national conferences to bring the regions together and showcase their initiatives.

Dr. Yosef suggested he might participate in the next one to familiarise delegates with palliative care.  The Council’s work is both preventive, seeking to offset and transform communal tensions often deployed to create tension and divisions; and constructive, supporting specific peacebuilding programs.

Following Mr. Hulluf’s powerpoint presentation, which showcased the mission, programs, and faith leaders of the Council, Dr. Merriman gave a brief presentation on the history and ethos of hospice, which also has religious roots in Lady Fabiola’s service to pilgrims making their way to the Holy Land. In the Middle Ages, hospices were run by religious orders, which were abolished during Reformation.

In the crisis of care for the dying that followed the Reformation, local units of government established hospitals, a word in English that shares a Latin root — hospitium — meaning hospitality, with hospice, but as Dr. Merriman said, is not a comfortable place to die.  The hospice movement had to wait for Dame Cicely Saundersto get started, “and now we know how to control severe pain.”

As the meeting moved towards its conclusion, the group was struck by how closely the core values of the Council: love, mutual respect, dignity, compassion, and the promotion of peace, matched those of palliative care. We discussed potential collaborations such as starting daycare programs at the various churches so volunteers (usually women) can feed the sick, discuss spirituality, and develop micro income generating projects.

The churches have the extensive and trusted networks that could propagate palliative care from the grassroots throughout this enormous country of 99 million, where an estimated 990,000 need palliative care for AIDS and cancer alone (This according to Dr. Anne Merriman’s formula for the total population, not just the minority who reach hospitals, and does not include other NCDs.)

The final discussion, sometimes in English, sometimes in Amharic, touched on the concept of Ubuntu, recently popularised by Archbishop Tutu and the late President Nelson Mandela. Ubuntu roughly translates as inter-connectedeness, or “interbeing” as Vietnamese monk Thich Nhan Hahn calls it. Based on care for one other in community, Ubuntu is an African ethos that resonates with palliative care, and as Dr. Merriman pointed out, “Africa has a message for the rest of the world!”

An institutional instance of Ubuntu, and one of Ethiopia’s unique community institutions is the village, or neighbourhood “iddir.” Iddirs are burial societies that organise funerals for members, even very poor people, who have contributed during their lifetime.  As Dr. Yosef, who did his palliative medicine fellowship in Kerala, which developed community-based palliative care, suggested, since health teams can’t go individually to each home, the iddirs and religious organisations could perform this function of identifying patients, and overseeing them in partnership with palliative care teams.

There is a mosque and a church in every village, and every religion obliges its faithful to help the sick.  Iddirs could be a source of volunteers who could teach people that they don’t have to suffer with pain, since morphine is the cheapest medicine, with the fewest complications, when used correctly.

In conclusion, Dr. Yosef offered to contribute the services of Hospice Ethiopia as part of the Council’s peacebuilding work.  As a source of common values based on the inherent dignity of the person, palliative care could serve as a trust-building activity among the faiths.

Mr. Hulluf, expressing the infectious excitement of the morning’s synergistic conversation, reflected that “Human beings originated in Ethiopia, [“Lucy” resides in the National Museum in Addis!  “Our agony, our passion, our hopes are the same, and we are one system of humanity.  When you suffer, part of my humanity suffers.  When the nose is hit, the eye sheds tears. We are doing the same thing in different ways.  This has been a beautiful, human, very deep, and spiritual discussion.  We must put our heads and hearts together so that we can accomplish this,” he said.