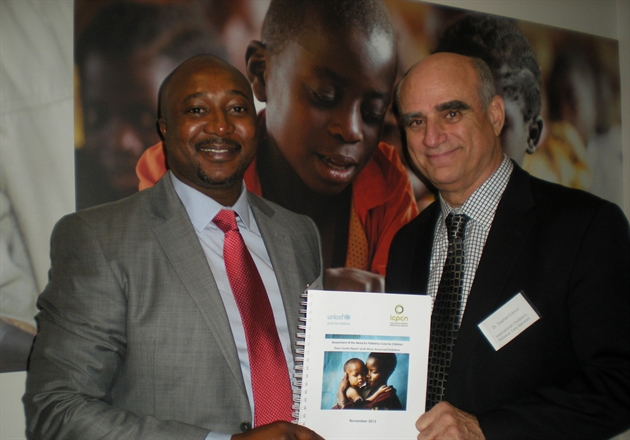 At UNICEF House in London last Friday, 8 November 2013,  ICPCN and UNICEF launched the results of a collaborative research project on the need for children’s palliative care in three sub Saharan African countries – Kenya, South Africa and Zimbabwe. Amongst the many dignitaries present were health ministry officials from Kenya and Zimbabwe, representatives of the funders of the research and the coordinator of cancer control from the World Health Organization.

Those present were warmly welcomed to the launch by David Bull, Chief Executive Director of UNICEF UK and Craig McClure, Chief HIV/AIDS Section, UNICEF, Headquarters. In his welcoming speech David Bull remarked that he often hears people talking about HIV as if we have solved the problem and don’t have to do anything any more. He reminded those present that this is not so and there are still many aspects of HIV that still need attention. He went on to say “If we have collectively failed to prevent children from becoming HIV positive and failed a second time in ensuring those children are getting treatment in keeping them alive and well, what we mustn’t do is fail a third time and let these children suffer and die in pain.” Craig McLure added that the core mandate of  UNICEF is to protect the rights of all children everywhere, particularly those disadvantaged and excluded. While the priority is that children survive and thrive and grow to be productive adults “any child, anywhere, with any chronic or fatal condition still die, and they should not die in pain.”

Remarkable team effort
Joan Marston, Chief Executive of ICPCN, then acknowledged all those who had worked on the research and said that it had been a remarkable experience and a real team effort. Showing a map estimating the global provision of children’s palliative care services it was evident that Africa had the greatest need. She went on to say that in Africa, children’s palliative care was fighting to be seen alongside many other issues, such as poverty, and also spoke of the challenges around getting some African countries to stock and make use of morphine for the adequate provision of pain relief.  A moving film from Moonshine Movies about Naledi, a remarkable 22 year old HIV survivor, gave those present a human face to attach to the importance of the research.

After hearing the rational for the study, the research methodology and findings were presented by Dr Stephen Connor and Chenjarai Sisimayi, both of these lead researchers being well qualified and experienced in the fields of HIV and palliative care. The research is the first study to look at the prevalence of life-limiting illness and life-threatening conditions in countries in the developing world, and compare this with the coverage of palliative care services to identify the gap between them, and to develop a methodology that can be used to estimate the global need.

Expert Panel Discussion
An expert panel discussion on the implications of the study followed the lunch break. Panel members included Joan Marston (ICPCN Chief Executive), Dr Cecilia Sepulveda (WHO); Dr Bernard Mandzima (Ministry of Health, Zimbabwe); Prof Myra Bluebond-Langner, (Chair of Pallaitive Care for Children and Young People, University of London) and Jo Temple (True Colours Trust Executive).  In her remarks, Prof Bluebond-Langner thanked the authors for a “robust and well written report” which clearly demonstrates the unmet need for services in the three countries while also shedding light on universal issues of practice and policies in children’s palliative care which demands attention. She said that the report make a contribution to palliative care beyond Africa as many of the issues raised are not unique to Africa and that we need to also measure the impact of palliative care. She went on to say: “If we do not relieve these children’s pain, we will have failed these children and ourselves. We are nowhere near where we need to be in the UK, in the United States, in Europe and in Africa with regard to outcomes.”

In her remarks, Dr Cecilia Sepulveda of the WHO stated that palliative care for children should be considered a human right and a child right and it should be seen as a part of universal coverage of care. Jo Temple from the True Colours Trust said that the report had shown that there is a huge gap in service provision and much work needs to be done to close it. She also said that in most cases “we know how to do it, we just need to get on and we need to do it.” She hoped that the research would unlock some doors in order to provide the means.

Closing
In closing the meeting with a vote of thanks, Barbara Gelb, Chief Executive Director of Together for Short Lives and Co-Chair of the ICPCN said how proud she was of the ICPCN and the work that has been done in the development of this research. “Today has been symbolic of a huge step forward in children’s palliative care. We are raising the profile right now, here, today. This research takes us closer to where we need to be.”

A full report on the launch will be made available on the ICPCN website in due course.