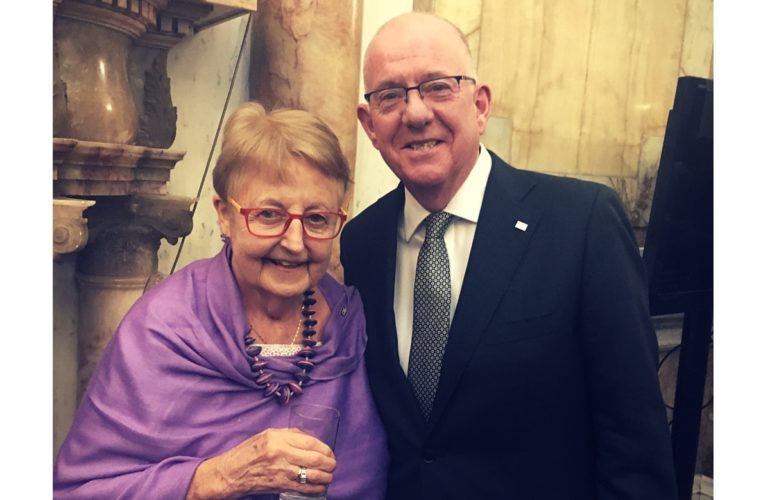 Hundreds of seriously ill people in Uganda who face a painful death will have their end of life journey transformed thanks to €90,000 raised by people in Ireland.

Hospice Africa Ireland (HAI) has announced a donation of €90,000 to Hospice Africa Uganda (HAU), an NGO whose mission is to provide palliative care for all in need in Africa.

The €90,000 comes from donations from individuals and organisations in Ireland and will go towards supporting clinical services including hiring two new nurses, employing a driver for a mobile hospice and  paying the cost of maintenance of a car in a third hospice.  The money will also upgrade the children’s day care room and programmes at the three HAU hospice sites in Uganda.

HAU was established in 1993 by inspirational 2014 Nobel Peace Prize nominee Dr Anne Merriman. It cares for more than 2,000 seriously ill and dying patients each month. HAU operates three hospices (Kampala, Mbarara and Hoima) and home care teams deliver the care to patients in their homes, administering oral liquid morphine which provides pain relief and allowas the patients to live and die in peaces with their families.

Dr Merriman was a guest of the Irish Government at the 2016 Commemoration ceremonies in Dublin over Easter weekend.

In Uganda 95% of people with cancer will never access treatment including chemotherapy, radiology or oncology. There is only one radiotherapy machine for the entire country (estimated population 39 million) and that is often not working.  Therefore, rather than cure, there needs to be a strong focus on palliative care and ensuring that patients die in peace and comfort while pain-free.

Hospice Africa Ireland was founded to support the work  of HAU, a modle for African palliative care. It has undertaken fundraising to further develop the clinical and education services.  This support is particularly important as the cycle of funding from United States Agency for International Development (USAID) ended last December and has resulted in a 60 per cent drop in income for the charity.

Dr Merriman, born in Liverpool, did her medical training in University College Dublin (UCD) and was awarded an Honorary Fellowship from UCD’s Medical School in 2007.  She joined the Medical Missionary of Mary in 1954.  She left the order 20 years later but maintained her missionary zeal and strong Irish connections with family and MMMs. Now aged 80, she is still involved with HAU day-to-day and leads out their International Programmes to develop hospice and palliative care  services throughout Africa.

According to the Chair of HAI, Tomás Keys, the reduction in support from USAID has resulted in a gap in funding for HAU which HAI and its supporters are aiming to address.

“It has been a very challenging time and we are delighted to announce that we have raised €90,000 through individual and institutional donors to support the vital care that HAU provides.”

“We are delighted with all of the support which we have received from the Irish Hospice Foundation (IHF) and Our Lady’s Hospice in Harold’s Cross as well as individual donors who contribute €10 and €20 per month. As a former volunteer in Uganda I am very excited at the enhanced volunteer opportunities which have been established for medical students in UCD. We have always had a strong tradition of volunteering in Ireland and it is great to see so many people from medical and non-medical backgrounds willing to assist with the fantastic work which Hospice Africa is doing in Uganda and further afield.

Dr Merriman thanked HAI and the people of Ireland for their generosity and fund raising efforts.

“Without the support of Irish people we would not be accessing as many patients as we do. Having four Irish grandparents and studied medicine in UCD, I feel very connected with the Irish people who have been huge supporters of HAU since we set up in 1993. “

The €90,000 was raised through various events in Ireland including a donation of €25,000 from the Irish Hospice Foundation from profits raised on its Fathers and Sons book as well as individual donations and a recent clothes swap event in Dublin.

People who wish to learn about the work of HAI and to make a donation online, can visit www.hospiceafrica.ie.

Cheques can be sent to

Lodgements can be made to HAI’s bank account in AIB