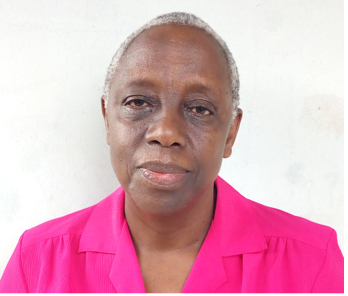 I joined Hospice Africa Uganda (HAU) in 1994 during its initial phase in Kampala.  I was coming from a curative hospital but while there I used to wonder what happened to patients when they were told there is nothing more we can do for you.

When I joined Hospice, it was in its second year introducing a model for African palliative care to a country that had never heard of it before.

I first worked as a volunteer and then I was fully employed in August 1994. We had a course in palliative care for health workers which initiated me into the work of hospice.

At first it was very challenging because the first patient I cared for was a young girl of 15 years with abdominal malignancy who had a fungating tumour on her abdomen.  Then there was a lady with disseminated Kaposi’s Sarcoma who was left in the house alone because she could not move and smelt so bad. It had rained and the water was flooding the house but only just reached the bed. She was in total pain.  These two patients needed a lot of understanding: listening to their stories of worry, despair and physical pain relief.

For the little things we did for them they were very grateful. We would relieve them of the foul smell and pain which made all the difference to their lives. While doing this I learnt to accept people as they are and to help them with whatever I have.

Then we started teaching other health workers about palliative care. Every morning we would go to Mulago and teach medical students about palliative care. This was another skill which I acquired from HAU because I had never taught before, except one to one with student nurses. Mbarara University was the second medical school in Uganda and that is where Mobile Hospice Mbarara was conceived.

Mobile Hospice Mbarara commenced 0n 6th January 1998 after being requested following a course of Palliative care for health professionals in 1994. The Vice Chancellor of Mbarara University of Science and Technology (MUST) invited Hospice Africa Uganda to come and teach palliative care. The Hospital was Called Mbarara University Teaching Hospital (MUTH). So, it was easy for HAU to teach the students at MUST and then follow them up in MUTH. That is how the collaboration started.

On 6th Jan 1998 the team set out from Kampala to being teaching at Mbarara University of Science and Technology (MUST) where, at the same time, we started to provide services to patients and their families as well. Teaching is key to providing palliative care to all in need, not only in Uganda, but to the whole of Africa.

In the beginning we were a team of four people with a Land Rover generously donated by Professor Pat Pathak, who was leaving the University. This enabled us to start the work of Providing Palliative care in Mbarara and the surrounding areas.

A key challenge at the beginning was obtaining funding but, by the grace of God, we were given a 3H grant by Rotarians. This, again, was through our friend Prof Path Pathak who was a Rotarian. We worked with the local Rotarians to make sure the grant was spent according to the contract. There were also many other donors who helped us during that time like the Andrew Mitchell Trust which gave us the money to buy our premises and the 3H grant renovated it.

We were given a house in the university quarters as our accommodation. We started work in one room in the girls’ hostel in the university. It was an uphill task because palliative care was a new specialty and very few people could understand it.

We had a problem because patients died very soon after admission – which did not go well with families and health workers. This happened because the patient’s disease was already very advanced by the time they arrived as they were referred so late.

The good news was for those whose disease was not so advanced and we were most appreciated because of our ability to help with pain and symptom control.

There was an elderly man called Kabamwerere whom I remember well because he walked to our place of work the morning after he was given morphine for the first time. He came to us to tell us that he was very grateful for the oral morphine we had given him. He had had a good night’s sleep and today he was able to walk from the ward to our place of work. He said “I know I am going to die but, please I am asking you, kindly to keep this medicine for all those who will come after me. They will need it as well”.

To me that was very encouraging and touching. Kabamwerere was discharged and died at home. He had Disseminated Kaposi’s Sarcoma and HIV.

On the first home visit I made I met a woman working in her banana plantation. I greeted her and told her that I had come to see the patient and she replied saying “I am the one.” We sat on a mat and discussed all aspects of her illness after which I gave her a few medicines and left. She was very grateful because, for the first time, someone took time to explain to her the nature of her disease and to inform her that she is going to have to live with a colostomy for the rest of her life.

I could go on and on about my experience with patients and how working with hospice has taught me never to take anything for granted. Death is something we live with and we have to appreciate the moments we spend with each other and at the end of every day, make peace with people we live and work with.

Education has helped other health professionals, and the entire community, to learn about the importance of palliative care. We still have a long way to go to get to where we want to be but at least now people understand what palliative care is all about.

Martha Rabwoni has now been with Hospice Africa Uganda (HAU) for 27 years. She is the HAU lead Nurse and a founder member of Mobile Hospice Mbarara (MHM,) team, where she has been the Health Services Coordinator for 22 years.