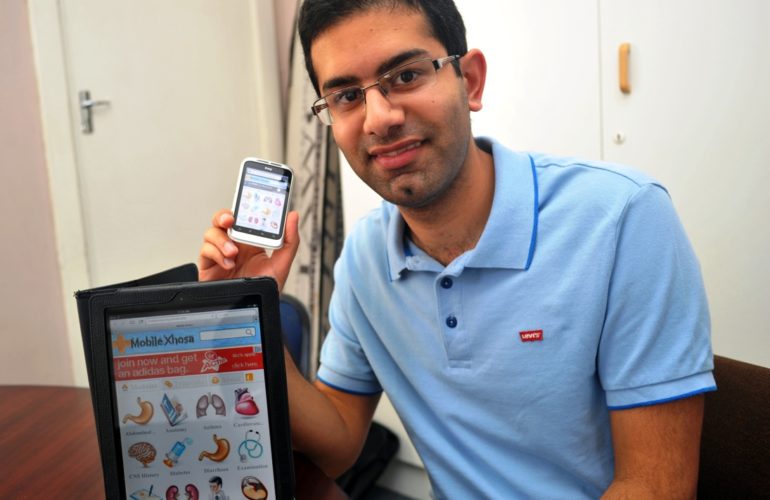 It’s a common problem healthcare practitioners face in a multilingual society: how to translate medical questions and ailments in another language accurately enough to provide correct diagnosis and treatment.

His Mobile Xhosa website/mobisite is a technologically innovative and neat solution. The site provides free English/isiXhosa translations, via cellphone, for commonly used medical phrases. Access is via a URL, and once on the site, users can search according to groups of commonly asked phrases such as ‘presenting problem’, ‘heart’, ‘respiratory’ or ‘social’. It also has a dictionary.

The idea came to Moolla two years ago, when the need for medical translations became apparent during his volunteer work at SHAWCO clinics. It was also fuelled by an interest in web design and communications developed as a schoolboy at Rondebosch Boys’ High School.

“Language proficiency is part of our medical training. We learn Afrikaans and isiXhosa through the Department of African Languages in the School of Languages and Literatures, which teach us the basic skills needed to communicate with patients.”

“So I built the site as an aid for myself, a handy reference on my phone. It helps so much to be able to explain to a patient that you will be taking blood, for example, so that they understand what you’re doing and why. It reduces anxiety and improves the quality of care.”

In fourth year he showed the site to one of his tutors, who encouraged Moolla to flesh it out. This he did with the help of the African languages and literatures team who became instrumental in the site’s development. It’s still a work in progress. The department provides new translations on an on-going basis – and Moolla keeps discovering new phrases he has trouble communicating!

He’d also had a first-hand ‘lost in translation’ experience when he visited a doctor during a trip to Egypt.

“They spoke only Arabic. I didn’t get the proper treatment – or reassurances. In South Africa, patients experience this in their own country.”

He’d like to include sound bites to help students with pronunciation, and he’d like to see the site expand to include other vernacular languages.

This article was originally published on the UCT website