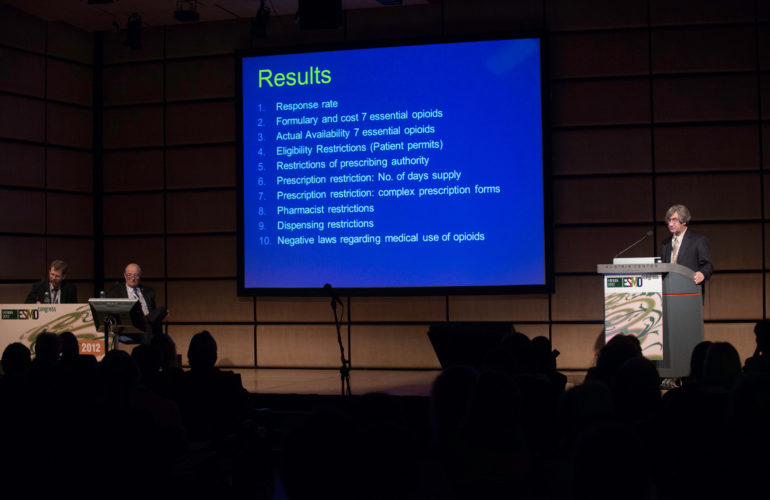 In 2010, the European Society for Medical Oncology (ESMO) and the European Association of Palliative Care (EAPC) published essential data documenting the various causes for differences in opioid access between Western and Eastern Europe.

The ESMO and EAPC partnered again in 2012 with the World Health Organization (WHO), the Union for International Cancer Control (UICC), and the University of Wisconsin-Madison’s Pain and Policy Studies Group (PPSG) to repeat the study in other “under-palliative care resourced” areas around the world.

Collaborating with more than fifteen palliative care actors in the studied regions, including the African Organisation for Research and Training in Cancer (AORTIC) and the African Palliative Care Association (APCA), ESMO and its partners worked together to complete a worldwide survey questionnaire comparing current standards against the international standards set by WHO and the International Narcotics Board.

The data was presented at a session at the 2012 ESMO Congress in Vienna, Austria. There the ESMO research team led by Nathan Cherny, Chair of the ESMO Palliative Care Working Group, presented the raw data collected by observers within the countries of studies and compiled by ESMO.

The survey results are the most comprehensive of its kind and representative of 83 percent of the surveyed population. The results expose the differences in availability of necessary opioids across countries and even within countries.

In addition, the survey brings together data from both the WHO Access to Controlled Medications and WHO Cancer Control Programs worldwide. The findings show strong evidence for the need for policy reform in order to improve the management of severe cancer pain and relieve unnecessary suffering worldwide.

Currently, ESMO is requesting its members and clinicians in Africa to peer-review the current data in order to ensure that it is as accurate, up to date, and fair as possible prior to publication.

The data can be retrieved here, or on the ESMO website, along with instructions, a list of ESMO’s international partners, and a forum to foster online discussion.

Peer review amendments and feedback will be considered until 31 December 2012.