For the Future of Hospice: The Ken Hermann Sr. Memorial Palliative Care Fund 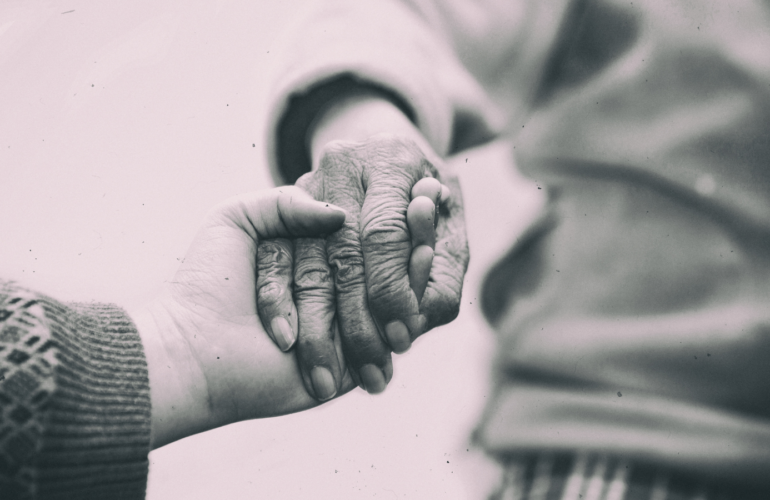 This story was originally published by London Community Foundation.

Ken Hermann Sr. was born in Stratford, Ontario in 1921. The youngest of 9 children, Ken and his 8 sisters were raised by their mother. Ken left school in grade 10 and took on various odd jobs to support his family, and as soon as he was old enough, enlisted in the Royal Canadian Navy.

Serving primarily on the HMS Orangeville as a sonar operator during the Battle of the Atlantic, Ken’s role was to locate German U-boats and determine where to drop depth charges; underwater explosives timed to detonate simultaneously at various depths.

“He didn’t like sharing war stories and felt guilty that he came home alive when so many of his buddies had not come home at all.” recalls Karl Hermann, Ken’s youngest son. “I asked him one day if he ever sunk a U-boat — he said ‘I don’t know son, I hope not.’”

After the war, Ken once again began working a variety of jobs around Southwestern Ontario, and it was while working in Windsor that he met his wife-to-be, Eva.

”She was the kindest and quietest Mom you could imagine,” remembers Ken Jr., Ken’s oldest son. “Always caring for others, and never selfish.”

Eventually settling down as an insurance salesman for London Life in 1948, Ken quickly found success in the industry, working his way up to a managerial position and eventually becoming one of the top salesmen in Canada. Not one to take his success for granted, Ken always remembered to keep those less fortunate than himself in his thoughts, giving back to his community as an active fundraiser for the Knights of Columbus, Rotary Club, and various church organizations.

Shortly before Ken retired from London Life, Eva fell ill and, after an extended stay at St. Joseph’s Hospital, passed away at home in 1978. Ken quickly saw that the palliative care facilities, training, and practices of the time were lacking.

Palliative care is an approach to health care that prioritizes the comfort and dignity of terminal patients during their final days. This can include delicately balanced drug-programs to keep them pain free, or allowing access to comforts like pets and family-gathering spaces.

“Not every doctor or nurse has the ability to be a good palliative care person. It requires training and a certain mind set: one of patience, understanding, caring and compassion,” says Karl. “They need to be able to go to conferences or take course to learn more, and despite the desire to improve and learn, there often just isn’t funding for it.”

Ken’s health began deteriorating in 2013, at which point he made the decision to move into Veterans Care at Parkwood Institute. Once again, Ken and his family were face-to-face with the difficulties of being a patient, and provider, of palliative care.

“I wanted to cook my Dad his favourite ‘coddled eggs’ one day in his room, only to be – and rightfully so – chastised by security for cooking in a hospital room,” recalls Karl. “Parkwood tried hard to provide comfort, but at the time their palliative care practices were not as well developed as they are now.”

A year later in 2014, Ken passed away at the age of 93. Throughout his life, he made sure to impress the importance of working hard upon his children. Growing up during the Great Depression of the 1920’s and beginning work at a very young age to support his Mom and sisters taught him to be frugal and disciplined. It also taught him to appreciate what he had and to always remember to give back to his community.

“Because he came from humble beginnings, he quickly gravitated towards philanthropy in his later years,” says Jeff Hermann, Ken’s second youngest son. “We learned our own desire to help from him, reinforced by the grace we said before every meal – ‘and let us always be mindful of those less fortunate than ourselves.’”

Ken’s stern yet kind and generous heart is what inspired his family to establish the Ken Hermann Sr. Memorial Palliative Care Fund at LCF two years after his passing, supporting the training and education of front-line palliative care staff.

“We wanted to use some of the money Dad left us in his inheritance to start a fund in his name,” says Karl. “It was a chance for us to put Dad’s words into practice, ‘think of those less fortunate than ourselves’ and give to a worthy cause.”

LCF’s community knowledge played a significant role in the Hermann’s decision to start a fund with the Foundation.

“LCF is known for serving the community and has the good wishes of Londoners at heart,” says Karl. “They can tell you how you can turn your philanthropic dreams into a reality, regardless of how much money your fund may have.”

His legacy is not only kept alive by the fund established in his memory, but will continue to live on through the generosity and selflessness he imparted on his children. Countless palliative care patients and practitioners will feel the impact of Ken’s passion for his community, and for those in need of comfort and support, for generations to come.