Joy and dignity among the crops as P.E.I. patients help tend garden beds 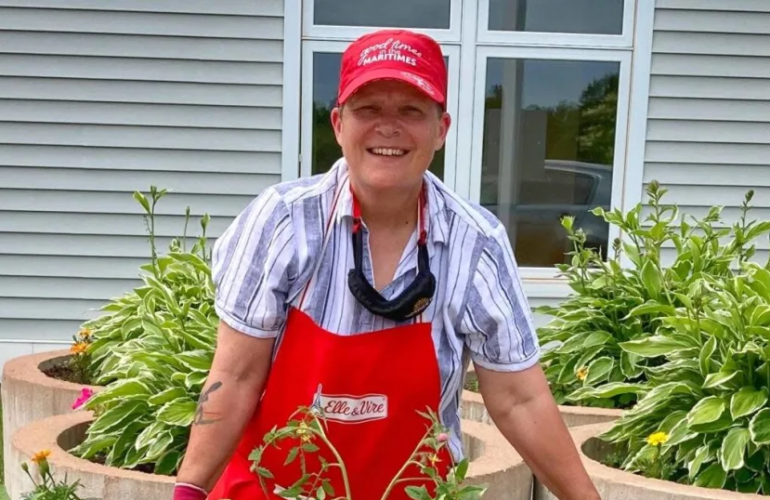 This article was originally published by CBC News on August 21, 2022.

When Nancymarie Arsenault started working at Hospice P.E.I. as executive director five years ago, she heard about a client struggling with food insecurity.

That led her to apply for funding to create four raised garden beds at the Provincial Palliative Care Centre, where Hospice P.E.I.’s offices used to be.

“I had a few comments like ‘You’re going to grow food for people who are dying?’ and I was like, ‘Yes, they still eat,'” she said.

She called the project Gardens of Life. Now, it has expanded to 19 boxes at the palliative care centre near Queen Elizabeth Hospital in Charlottetown, plus five long-term care homes where hospice volunteers help out.

Over the years, the project has become about much more than simply providing food, Arsenault said.

“In the long-term care homes, residents would help me plant them when I brought the seedlings in,” she said.

“Not everybody gets to see the fruition because they may die before that happens. But life goes on. And we always say, ‘Our work isn’t about dying, it’s about living.’ And those Gardens of Life help create that message.”

‘Little things we can do’

Arsenault plants the boxes herself, then staff at the facilities help keep an eye on them, watering and weeding the plants.

She grows small vegetables and edible flowers, but she mixes up the varieties every year. The first summer, there were heirloom tomatoes and peppers, for example.

The food is available for anyone who might want or need it, Arsenault said.

One year, she grew beets and left them in the community kitchen at the Provincial Palliative Care Centre. “Then somebody came back with a jar of pickled beets they had made with the beets that we had left there.”

As well as providing food, the project has allowed joy to bloom in places many think of as lacking that quality.

Arsenault remembers a few years ago, when Hospice P.E.I. volunteers were supporting a patient who had not been in a great place mentally and physically.

One day, she saw from her office that a volunteer had been able to get the woman outside to enjoy the fresh air and check out the garden boxes.

“It brought her great joy,” Arsenault said. “At one point, she asked if she could work for the organization. We thought about it and we made her our official ‘Hospice Garden Inspector’ for the time she was at the palliative care centre.”

They even made the patient a Hospice P.E.I. ID card that hung from a lanyard.

“She has since passed away. That’s quite a few years ago, but she proudly wore that,” Arsenault said.

“Those little things we can do to make people’s lives enjoyable, meaningful, have dignity — however we can make those things happen for people, we try as best we can. And the gardening piece is certainly one of them.”

‘A match made in heaven’

Arsenault said the project has been able to continue and grow thanks to help from the community. This year, for example, she received plant donations from Charlottetown resident Cindy Burton.

Burton was launching a small seed company, and a few months ago she was doing germination tests on all the different seeds she would offer. She put up a Facebook post offering to give away the seedlings. They were all gone by the time Arsenault reached out.

After Arsenault told Burton about Hospice P.E.I. and the Gardens of Life project, she went on to donate a number of tomato and pepper plants.

“It was a match made in heaven,” Burton said.

Her own dad, who’s 99, loves gardening and still has a small garden on his deck.

“He has something that needs him, something where he can go out and he can prune it, or water it and be in touch with it. Because a lot of times when people are near the end of their life, they don’t feel like they have a purpose. They don’t feel like somebody needs them.

“So it … connects people to the cycle of life, but it also connects them to being needed still.”

At the moment, Arsenault is looking to expand the Gardens of Life project even further.

Among other things, she’s hoping to create a few more boxes at Hospice P.E.I.’s new office in downtown Charlottetown.

“There’s quite a possibility we will have our own gardening at this beautiful location that we’re at. We certainly have the space to do it.”