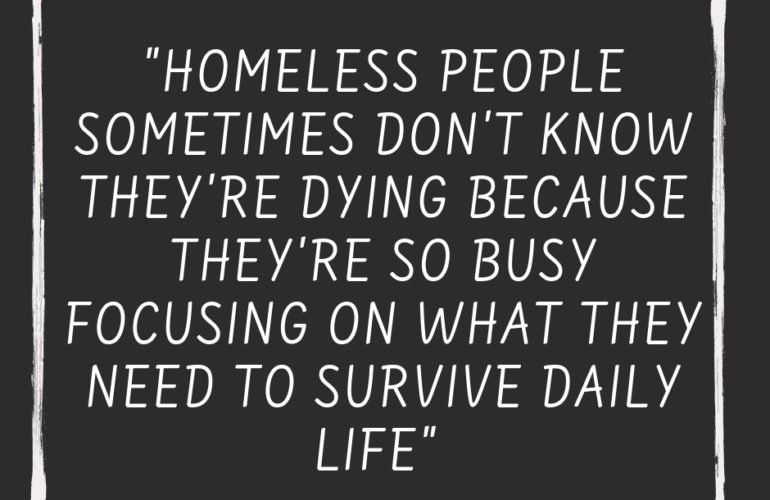 Many homeless people die “tragic” deaths, often in squalid conditions, alone and in pain. But that could change if they had better access to end-of-life care, a University of Victoria nursing professor told people gathered in Thunder Bay for the annual northwestern Ontario palliative care conference.

“When people get access to palliative care, when they get the opportunity to be cared for at a hospice or on a palliative care unit, often what people will say to us is it’s the first time that I’ve been treated well in my entire life,” said keynote speaker Kelli Stajduhar.

Her interest in helping marginalized people goes back decades to a patient she met when she was a palliative care nurse. The story still “haunts” Stajduhar, and helps drive her work in palliative care.

Sherry was a 27-year-old woman who fled an abusive relationship in Toronto, and ended up on the streets of Victoria, dying of AIDS.

“She was the most rough and tumble person that I had ever met,” said Stajduhar.

But for Sherry, who had grown up in the foster system, the care she received at the end of her life “gave her a home,” said Stajduhar. “It gave her a sense of family, a sense of love and a place to lay her head.”

For the past five years, Stajduhar has been part of a group examining how to help homeless and marginalized people access palliative care because at present they “do not have particularly dignified deaths.”

They’re dying in single-occupancy hotel rooms, in parks or on the street.