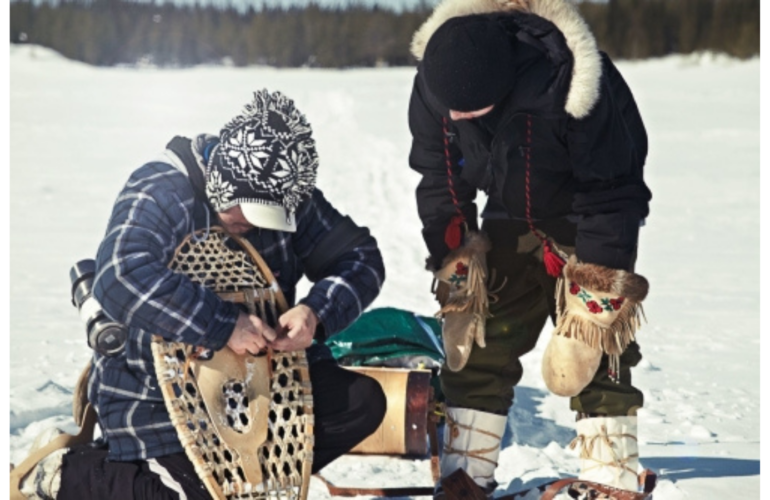 This story was originally published by McGill University’s Council on Palliative Care on December 7, 2021.

Thus says our God:
Stand at the crossroads and look;
as for the ancient paths, where the
good way lies and walk in it, and find
rest for your souls.
-Jeremiah 6:16

RITES OF PASSAGE IN THE LIFE OF CREE OF QUEBEC

Like families and communities everywhere in Quebec, the Cree families in northern Quebec never miss happy celebrations of birthdays, graduations, weddings and anniversaries. However, unlike many others, the extended Cree families also celebrate the more memorable ceremonies, or rites of passage, which mark those important milestones in each person’s life: the baby is born and named; the toddler first “walks out” onto the earth outside the dwelling; the child first walks on snowshoes; the adolescent celebrates his or her first hunt or her first moon; the adult experiences visioning ceremonies; and, later, the person’s dying is marked by the rite of passage of letting go at the end of life later followed by the memorial give-away.

Ceremonies like the walking out and the first snowshoe walk were infrequent for several decades until their revival in the mid-1970s. Although residential schooling seriously disrupted the first hunt and the first moon ceremonies associated with puberty, they have been and are being reclaimed. And modern medical services have intruded into the social patterns which formerly celebrated each person at the beginning and the ending of their life’s journey.

In the last few years, the Cree Board of Health and Social Services of James Bay, or the Region 18 of Quebec’s health and social services, has introduced, or rather re-introduced, midwifery services and bringing back Cree rites of passage around birth. These services have begun in Chisasibi, the largest community and are systematically being extended to the eight other Cree communities. Before this, all pregnant women from each of the nine communities had to travel, usually to Val d’Or or Chibougamau, to deliver. Today this is changing and soon midwifery services will be one ordinary aspect of maternal health care in the region.

This leaves one significant rite of passage which has not yet been incorporated into health services: that of marking the person’s experience of life at the crossroads of its ending – the Cree version of a palliative approach to care of the dying.

WORKING TO SUPPORT THIS CREE PALLIATIVE APPROACH IN SERVICES

Palliative care for Cree not only involves the Cree Board of Health but also the three other regions where Cree patients with long-term serious illness are sent out to receive specialized care, including palliative. In the five years ending in 2019-20, an annual average of about 28 Cree were being diagnosed as palliative and dying in hospitals outside of the region. This was around 40% of annual deaths and is a minimum number. Other people died following long-term serious illnesses but were not necessarily documented as palliative either inside or outside of the region.

During the lockdown, creating linkages in the context of the continuum of care with Abitibi, Nord-du-Quebec and Montreal regions was impossible. However, recently, the McGill Continuing Professional Education Day on Palliative Care has resulted in linking Palliative Care McGill directly into the Cree Board of Health’s planning in this area.

THE NEED FOR A PALLIATIVE APPROACH

Similar to birthing, the process of dying in Eeyou Istchee has become medicalized and often far removed from the comforting, familiar and familial patterns only found within the family, community and language. Cree rites of passage during the process of dying were founded on common understandings and known practices to witness together that person’s final transition onto their new journey. Today, people in the communities and those working within health services are ready to support initiatives to adapt services to find a better approach to ease the way of those who are dying and those they are leaving behind.