Walk Across Canada With Ian 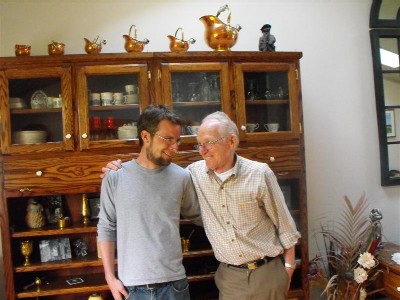 A Nova Scotia man is walking from coast-to-coast to raise money and start a conversation about palliative care.

Ian Bos was living in Victoria when he learned his father, Ted, had lung cancer.

He decided to move home to Nova Scotia and help care for him.

Ted passed away January 16 of this year.

Palliative care allowed him to remain at home, in comfort, until the end and that got Bos thinking.

“It really gave us that time to face death together,” says Bos. “My dad was very open about death. I think it made it easier for us as a family to kind of cope with that up until his passing.”

Bos wants other families dealing with death to have the same opportunity his father did.

In hopes of raising money and awareness for the Aberdeen Palliative Care Society, Bos is walking across Canada, covering 6,000 kilometres in roughly five months.

“It really gave my dad his dignity and I really believe that every Canadian should have access to that service.”

Right now, there is only one residential hospice in the Maritimes. However, if all goes as planned, Moncton’s 10 bed hospice will break ground in 2018.

“Access to palliative care is not equal across Canada, and certainly in New Brunswick it is something that we, as an organization and provincially as well, are looking to advance,” says Joanne Adair, executive director of Hospice Greater Moncton.

Bos says death may be an uncomfortable conversation, but it’s an important one.

“I really believe that you owe it to your family to share your wishes with them, so they know, if and when it happens.”

With roughly 200 kilometers behind him now, Bos has 5,800 kilometres left to keep the conversation going.

Listen to Ian’s story at http://bit.ly/1GaFyRG

To learn more about Ian and his coast-to-coast trek, please visit his Facebook page: http://www.facebook.com/ianswalk2015 as well as his

website http://chpca.convio.net/site/TR/Hike/General?fr_id=1400&pg=entry where you can donate to either a team or a hospice.