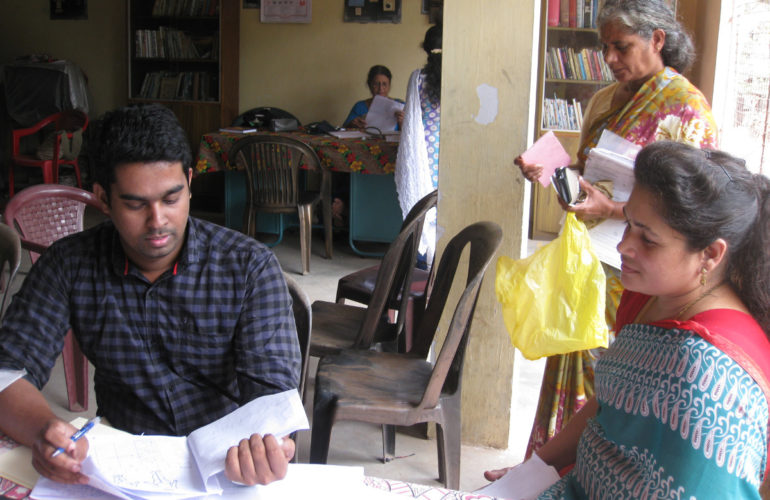 Here, they will get an assessment of their social situation, their symptoms and refills of their medications.

Many healthy appearing women are in clinic on this day. Their husbands or fathers have been injured through accidents either in India or in Gulf countries. Or the menfolk have had strokes and cannot make the trip to clinic. The women serve as ‘proxies’ – reporting symptoms and getting some support for the hard work that they do at home, in addition to their wage earning jobs.

The volunteer, Francis Ernest, bustles about the library, answering his cell phone and talking to patients and families while they wait. About eight years ago, he retired from his government job. In retirement, he saw a need for a community organisation to meet the health needs of home-bound patients. He asked Dr MR Rajagopal, the Chairman at Pallium India for some training for 20 interested community members.

At Pallium India, the volunteers receive training to be the case managers and are frequently the first contact for patients and potential patients in the community. They learn to do follow up for patients who are seen in clinic, receive referrals for Pallium India, and do initial visits after referrals.

Those 20 volunteers, under the leadership of Francis Ernest and Patricia Paul started the SNEHA Palliative Care Society for Murukkumpuzha. ‘Sneha’ means love in Sanskit, very close to the word in Malayalam for love – ‘sneham’. Now, eight years later, four to five of the original volunteers are still strongly involved.

There was another striking part of this morning’s clinic. A quiet and dignified man sat in his dhoti next to his daughter waiting for his turn to visit with the doctor. His diagnosis is motor neuron disease, which is amyotrophic lateral sclerosis (I wondered how he possibly made it up the flight of stairs).

He was having increasing problems with swallowing and has some regurgitation through his nose. He was losing weight and feeling short of breath. His fingers were developing contractures. He had pain.

His daughter, a nurse, elaborated on his narrative. Everyone listening, including this patient with his erect posture, knew that his disease was progressing. Pallium India provided medications for his pain and shortness of breath and he and his daughter went down the flight of stairs…slowly.

My admiration may have ended right there for this patient, except that I peeked out of the second story window and saw him climbing on the back of his daughter’s scooter, his contracted fingers on her shoulders. They must have felt me looking, because they looked up. My hand went to my heart and we smiled together. They seemed to enjoy my surprise. A week later, he is still in my heart.

This article originally appeared on Dr Ann Broderick’s WordPress blog. It is reprinted with permission.