The moment of HOPE: a doctor’s perspective 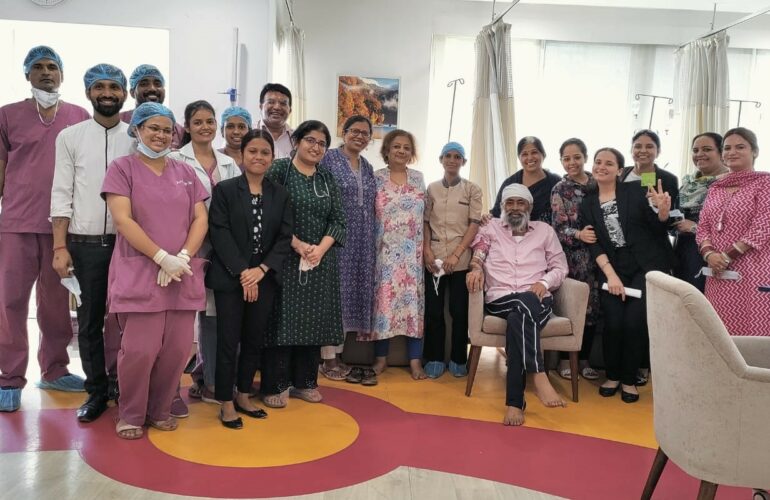 About the Author: Dr Ruparna Khurana completed her DNB in Radiotherapy and then completed her Senior Residency in Palliative Medicine from the All India Institute of Medical Sciences, New Delhi.

She is currently working as a Consultant, Palliative Medicine, at HOPE Oncology Clinic in New Delhi.

Poised and serene, dignified and eloquent he sat tall and expectant on his favourite recliner number 8, with an intravenous cannula facilitating a continuous gush of cytotoxic chemotherapeutic agent named gemcitabine into his blood stream. I smiled as I realised, I could talk to him today because I had completed my clerical work and was almost done seeing other patients. Something about him, was pulling me towards him as if his soul was speaking to mine; something from within urged me to listen to him, to understand him, to try and be in his psyche and gently wander for a while as I attempt to understand what the world means to him, what his perspectives are, how he feels and why he feels so, and what the colour of the sky in his eyes were.

I sat down, and initiated the conversation by complementing his attire as he was always innovative and uniquely dressed, to look like someone who would spend considerable time looking into the wardrobe to deliberate on what to wear for the big day today. Conscientious is the word that almost often comes to my mind when asked to describe the aptness and correctness I felt in this man. Though his pearly white beard was pristine and saint-like, yet it could not hold the curiosity and the yearnings of an aching heart. Or could it?

He wanted to know if I felt whether he would be ok? Whether there would be a time in his life when he would not have to think and brood and be concerned about coming to a hospital to get his chemotherapy or a PET scan and thereafter fret over his disease? He would say, “Will I be free of all this burden? I want to be free of this mesh. I want to start living a carefree and constructive life by devoting myself to the things I like. Main theek ho jaaunga na?’’

I could sense the strong desire and the yearning from deep within him to hear me just say “Yes you will be alright”, and to comfort and soothe him. I felt like he wanted to hear those words as if it was a magic potion that he needed to claim for his salvation. Even if I did not mean it in the sense i was supposed to, we both understood that it was supposed to mean.

He conjectured that whatever will be, will be. He knows and is willing to accept whatever the PET scan will reveal to him in the future. In the meanwhile, he would be comforted to a great deal if any doctor would just say to him that things would be ok. He would praise and remember those healing and supporting words, and which I’m certain he will also take to his grave.

I know that cholangiocarcinoma is an aggressive malignancy which is less responsive to any kind of therapy and in a metastatic post R1 resection setting, things are not very good. Or are they? What we know are statistics and numbers based on research on thousands of patients and that there will be outliers and underliers. We cannot predict with certainty what the fate of a particular patient will be. What we can discuss are probabilities and reasonable expectations.

Doctors have their limitations; medicine is a science but cancer is unpredictable and arbitrary at best, and devastating at worst. Me believing in miracles doesn’t really help much, and in fact are counterproductive to my prognostication skills. I am a palliative care physician and I am expected to break bad news, to give realistic hope, to make patients aware of what is happening inside and outside, to ask them what they want for now and for the future, all at the same time while trying to alleviate their suffering to the best of my capacity. The physical pain can be allayed with pharmacotherapy to a good extent, but what about the pain of your dreams being brutally smashed by a simple six letter word? What about the pain induced due to the possibility of you not being there for your next birthday and for the remaining part of your children’s life who you brought up in this world with so much love and care?

“You are perfectly fine now. You are eating well, you are mobile and gaining weight, have no pain, or jaundice, or no other clinical signs of deterioration, disease progression or recurrence, your mental faculties are excellent and you have a wonderful social support system with  a very intelligent son to care for you. You are doing very well right now”.

Whatever the PET scan might show, we have no reason to suspect that you are not perfect at this moment. You are as perfect as one could be!

I hope and pray that I can do justice to my patients. To be truthful and honest and at the same time also make them feel good about themselves, make them smile and be carefree even if lasts only for a few moments. Those moments are very precious to me and they give me the motivation to go on, to aim to see that spark in their eyes when they feel alive; and yes, alive!

This article is a republication from the Indian Association of Palliative Care’s monthly newsletter: September edition.