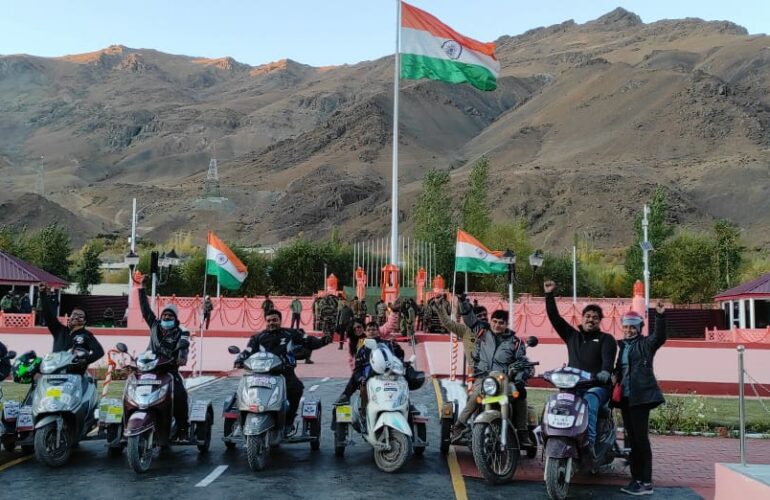 About the Author: Mr Sooraj P A is originally from Kerala and is now based in New Delhi. Mr Sooraj lost his mobility post his accident a few years ago. Mr Sooraj is the Founder of Ecomade, a social entrepreneurship initiative for the disabled. He is also the General Secretary of the Voice of the Disabled, an organisation working for the rights of the persons with disabilities. His dream is to make this world accessible to the differently abled.

We, the ‘Eagle Especially Able Riders’, were a group of differently-abled riders from 5 States who, on three-wheeled scooters, overcame obstacles and challenges that might have defeated even professional cyclists. The 2,500 km Delhi-Ladakh Kargil Accessibility Awareness round trip included the rugged Kargil-Ladakh ride and the horrifying Sosilla Pass, which poses serious challenges for even the best of bikers.

Our 14-member team travelled on 10 scooters for 12 days to cover the 2,500 kilometers to hoist the Indian flag at the War Memorial before returning to Delhi. 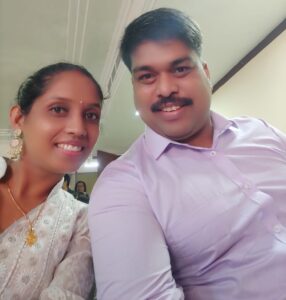 We undertook our journey on three-wheeled scooters, as it is the only vehicle permitted to be driven by a disabled person in India. I, wheelchair-bound from a spinal injury, and my wife Soumya joined the rest of the team in a  three-wheeler scooter. None of us imagined that we would be breaking world records by the  end of our journey.

My doctors had told me that a person with spinal injuries could not drive a three-wheeler vehicle for even 25 km. But I, the only member of the team with a spinal injury, rode with confidence due to a previous successful 5 day ride I had undertaken to Himachal Pradesh last year, which covered 800kms.  This journey to Kargil was the fulfilment of a dream which I had held dear since the day I took over as Secretary of the ‘Voice of the Disabled’, to show people with disabilities a fully accessible world.

The Delhi-Ladakh Kargil Accessibility Awareness trip was flagged off at 9 a.m. from the the India Gate on 10th October,2021, to proceed towards Chandigarh (260 kms) away. 150 kms into the journey, I encountered my first incident when my scooter’s belt broke due to overheating. A  short 10 kms later, my  duplicate belt also broke. Yet, I remained optimistic. I will admit that these initial hiccups made me contemplate to abandon my attempt, as I felt that such setbacks would hamper the team’ progress. Our team leader, Hemant said, “We have to try to overcome these problems and keep going. It will be a lesson to others.” It was the team’s support that got me to Ladakh. Though later than the schedules time, we managed to reach a Gurudwara in Chandigarh where food and accommodation awaited us. We then retired for the night.

On the second day, we proceeded towards Jammu. We reached earlier than expected as I had by then downloaded a detailed map. Here, we stayed at an NGO’s institute and also celebrated our fellow traveller, Parvez’s child’s birthday with a cake.

Our destination for day three was Ramban. A little into the journey, I encountered a flat tyre. To my despair, the mechanic from the local repair shop was unable to fix the flat tyre as I was on a three-wheeler. Govinda, my team member fortunately knew how to fix it. A little later we had to stop again for a technical fix. We enjoyed a fabulous experience as we drove through two 9-kilometer long tunnels. We then reached our hotel, where though the room was wheelchair-friendly, getting to the room was a bit of a challenge as the hotel staff had to carry me to all the way to my room on the second floor.

Our target on the fourth day was Srinagar. The roads began to get rough, which deterred one of our team-members from continuing our journey. We visited the Padma Shri recipient Javed Ahmad Thaksin’s institution, where we were given a warm reception. We were overhwhlemed to see that people with special abilities including autistic children, receiving education and jobs. If only there were such places in every state of India!! We continued our journey to Srinagar and spent the night at an NGO. The following morning we met a couple of dear friends, Basheerka and Sreejith, who had set out for North India in wheelchairs, all the way from Kerala.

On the fifth day we headed for Sonamarg. We rode slowly, followed the map and admired the beautiful snow-covered valleys enroute. Our plan for a horse ride over the hills of Sonamarg was scrapped however, due to bad weather. We spent the night in a heated room with the rhythms of the fire-dance, beating outside.

On day six, we prepared to climb the Sosilla Pass. As, I was the only person in a wheelchair, we decided to leave it behind to reduce weight. Even though we had to cover only 130 kilometers to reach Kargil, our route now included a challenging mountain pass. We followed slowly as everyone else went ahead.  At this point, Soumya and I decided to reduce weight as we removed some heavy fittings and stored them safely off-road. At times, Soumya had to get off and push us up the steep slopes, because even the slightest imbalance would have resulted in a fall and serious injuries. We eventually caught up with the others, and were welcome with huge applauses and warm accolade

s. It was then that we realized that our dream and ironically our greatest fear, the Sosilla Pass, had been conquered! For a moment I was speechless.

ed our journey to the Kargil War Memorial where we paid our respects to our fallen soldiers. We climbed back to the top of the Kargil Hill in Ladakh, before continuing our journey until the Pakistan border. While there, I remembered a conversation I had had with a friend, Mala, while planning the trip. Mala had requested that I present her with  a handful of the soil, soaked with the blood of the soldiers who sacrificed their lives for the sake of our 130 crore Indians. You see, Kargil holds a special place and heroic memories for every Indian. Incidently, I met a soldier there from my State, Kerala. He approached me while I was atop the Kargil hill after seeing my vehicle registration number. While we bonded and chatted, I told him about Mala’s request. He immediately gave me a handful of the ‘Kargil soil’ in a plastic bag.. A heart-rending moment! We hoisted the Indian flag and sang Vande Mataram at the tops of our voices!!

After that, we made the descent back to Kargil town. Upon reaching the hotel, the hotel staff had to once again carry me back to my room on the second floor, as I didn’t have access to my wheelchair. At approx. 2 a.m. that night we woke up due to breathing issues. We looked down only to realize that the smoke from a fire was the reason for our suffocation.

Srinagar was our target for the seventh day. The flat tyre in my vehilcle prompted me to tell my team to set off without us. I soon realised that my vehicle also had other problems, which could not be fixed at the local repair shops.  We therefore had no other option but to descend the Sosilla Pass, as we were, balancing on my tilting vehicle, with my helmet sort of scraping on the oncoming heavily loaded lorries. We eventually, returned to where we had left our discarded items which we fitted back onto the scooter and fortunately found a local repair shop, where they fixed my vehicle, at no cost. At Sonamarg, we collected the wheelchair, I had left behind and headed for Srinagar.

On the eighth day, I explored Srinagar on my scooter while the others went boating on the Dal lakes.  By 11 a.m., we set off for Ramban. During this stretch, the front tyre of my wheelchair got burnt by the silencer, while the back tyre got punctured again (rough terrain), which cost me an hour and a half to repair. When I inspected the wheelchair, I also realized that the scooter’s brakes were missing. We then sorted that out. Finally, by evening we arrived at our hotel at Ramban.

On day nine, our destination was Jammu. We received the AHCF Global Book of Records and stayed there after their warm reception for us. The following day we visited the nearest workshop for more repairs.

On day ten, our journey to Indore was pleasant where we enjoyed the beauty of the jungle and met people with different abilities, including children.

We covered 320 kms on the eleventh day, the longest daily distance of our journey. After Jammu, our phones picked up good reception and we were able to communicate with each other. In the afternoon there was a special reception and banquet organized by the Haryana Disability Commissioner. Soumya was felicitated by the commissioner, as a token of respect to helping me make my journey a success.

From there we reached Dharamshala in Kurukshetra, where food, accommodation and a wheelchair-friendly room awaited us. 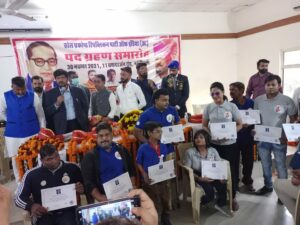 Finally, the last day of our trip concluded with us arriving at Delhi by5 p.m. where friends welcomed us with great excitement and applause. The media had arranged for video coverage in front of the India Gate. My Mahindra Duro scooter had brought me back home safely after a journey of 2,500 kms.

Based on this travel experience, I have one thing to say to friends with disabilities. “Disability should never be seen as a shackle. Do not think of yourself as deprived of chances and situations. We must create these by and for ourselves. If you want to travel, do it right away. The  future may not provide you with the desire or the health to undertake the journey that you want to. My best wishes to all of you for all your travels”.