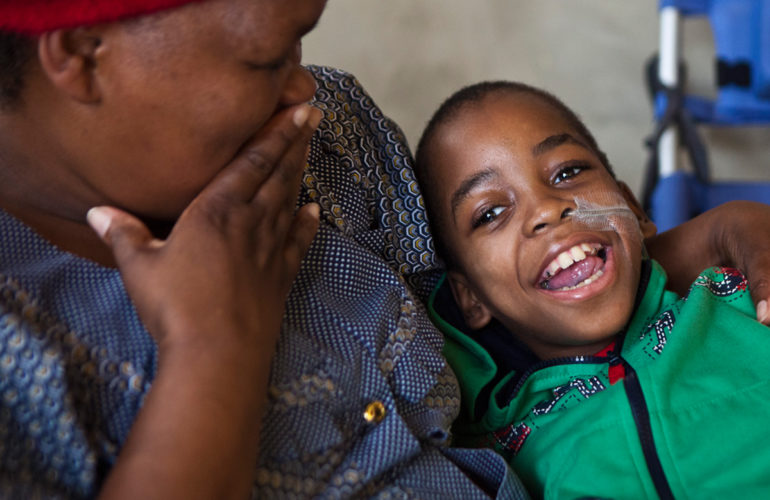 For most people outside of the palliative care world, the words hospice and palliative care are synonymous with end of life care. The case that follows serves to remind us that, more importantly, it is about quality of life for whatever time a patient has left. Children often live for many years with their illness or condition and good management ensures that those years are lived to the child’s full potential.

I walk into the tiny but immaculate home and am greeted by a smile that lights up the room. Cradled in his mother’s arms, Clement is smartly dressed in new jeans and a brightly striped T-shirt. It is his eleventh birthday; a real celebration. I think back to 18 months ago when I first met him at a local hospital in Durban, South Africa. I can hardly believe the transformation.

As a doctor working in children’s palliative care, I was asked to see this skinny little boy with severe cerebral palsy. He had been admitted with aspiration pneumonia caused by his difficulty in swallowing and he was in a great deal of pain due to muscle spasms; all common and well recognised complications of neurological impairment in children. He was fed through a nasogastric  tube but he was caught in a vicious cycle of pain, recurrent aspiration pneumonia, seizures and distress.

When I first saw him he had been in hospital for nearly 3 months. He had been on multiple antibiotics, was oxygen dependant and had been subjected to endless blood tests and chest x-rays. Because of his swallowing issues, his mother needed to use a suction machine to clear his mouth frequently. Everyone was getting desperate, starting to believe he would not recover and that perhaps it was time ‘let him go’. His mother never left his side. We counselled Clement’s parents, hoping for the best but quite certain that things were only going to get worse.

His primary care team felt nothing more could be done. However, reviewing his symptoms and medications we realised that we hadn’t even scratched the surface of possible treatments. We needed to change the focus of care from trying to ‘fix’ his current pneumonia. We made sure that we involved both his parents in every step along the way.

It was important that we reviewed the causes of symptoms in children with neurological impairment and how to approach them.  Our thought processes followed these lines:

The result was a comfortable child who could breathe more easily and stopped aspirating. His chest improved, the oxygen was weaned and he went home, happy.

Managing neurologically impaired children can be distressing for the health professional who is trained to cure illnesses, directing treatments at the cause. Pain and other symptoms are a very significant problem but largely underestimated, particularly in children who are unable to report or describe such symptoms. We need to accept that even when we cannot cure or fix the underlying cause, there is much we can do to relieve these symptoms and at the same time equip parents and caregivers to manage the child at home.

As for Clement, 18 months later he is still at home and thriving!