The original article can be found here.

SINGAPORE – While treating a young patient who was nearing the end of her life after suffering paralysis due to a rare tumour, Dr Chong Poh Heng watched her create an artwork with a hand print as a parting gift to her mother.

“This way, she will always be able to touch her hand to mine after I’m gone”, she told Dr Chong.

This was one of many cases that have left a deep impression on Dr Chong since he set up his paediatric palliative initiative in 2012. 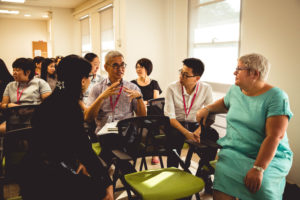 The initiative, Star Pals, has served almost 500 young patients and completed more than 25,895 house visits since its inception, providing end-of-life care to children and their families despite the challenges brought on by the Covid-19 pandemic.

For his work, Dr Chong, 55, received the Leaders of Good award at the President’s Volunteerism and Philanthropy Awards (PVPA) at the Istana on Monday (Oct 11).

Twelve winners across four categories were recognised at the awards, selected from more than 300 nominations. This is the highest number of nominations received since the PVPA’s inception in 2012.

Dr Chong said the award is a validation of the hard work that he and his team have put in and the sacrifices made.

He added: “There is much more work to be done in the sector going forward and I hope this award will raise awareness about this field.”

Dr Chong recognised the significance of palliative care for the first time as a medical student in 1985, when he approached his mentor, palliative care pioneer Anne Merriman, requesting her care for his grandfather who was dying from throat cancer.

Years later, when he came across children who were diagnosed with terminal illnesses at his private practice, Dr Chong realised there were gaps in the healthcare system.

He said parents often found it difficult to accept that their child might not survive, seeking treatment in the hospital till the child’s death, instead of palliative care.

“They did not know that there was an alternative option where parents can choose the care a child receives towards the end of their life.”

At the age of 40, Dr Chong decided to take the leap and pivot to the field of palliative care, focusing on children. With the help of sponsors and community organisations, he set up Star Pals.

The organisation also supports parents and siblings with arrangements to come to terms with the loss of their family member.

Another winner under the Leaders of Good category was Mr David Hoe, 33, who founded social empowerment initiative I Am Talented (IAT) in 2011.

IAT has reached out to more than 1,000 students, helping them discover their talent through song writing and photography workshops.

Mr Hoe said: “I hope that this award will inspire youth to be intentional in choosing to care for the community around us and make it a point to pay it forward.”