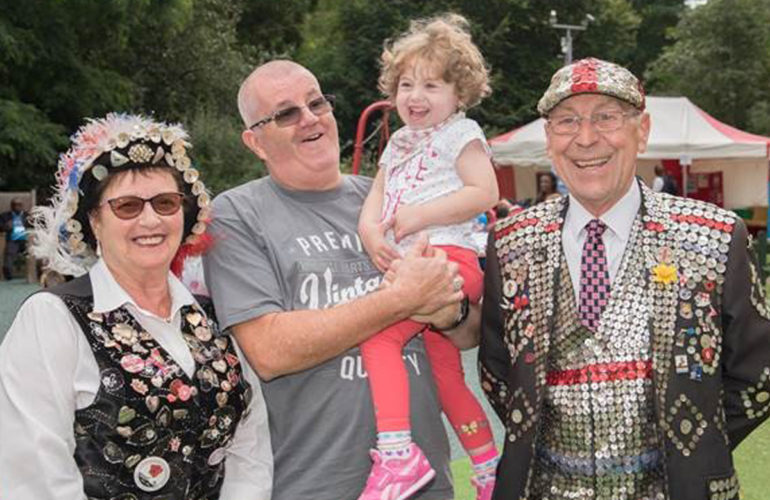 This weekend Richard House Children’s hospice was buzzing with excitement, as people from communities across East London came together to enjoy the hospice’s annual community fun day ‘Summerfest’. The children and families who use the hospice’s services come from Newham, Barking, Dagenham, Tower Hamlets, Waltham Forest, Hackney, Redbridge, Haringey, Islington, Ilford, Camden and into Essex.

Celebrating the event with the children, families and other guests were Doreen Golding BEM, Pearly Queen of Old Kent Road and Bow Bells and Freeman of the City of London with Bob Paice, Pearly King of Forest Gate, who have supported Richard House since before it was built. Doreen said; ”We have supported Richard House for many years now and love coming here. Seeing everyone having so much fun, singing and laughing is just what an East End gathering should be. Great to be part of something that means so much to so many children and families who use the marvellous services here, like Hope.”

Hope
Hope is a bright, bubbly cheerful four-and-a-half-year-old who suffers from a rare condition called neutropenia. This means that there are not enough white blood cells in her blood stream, making her very susceptible to infections. She was also born with further complications that caused brain damage and delayed her development. Despite of all these difficulties, Hope is a happy and sparkling child with an infectious personality who has been coming to Richard House since 2014.

Hope’s grandad. John, first heard about Richard House through a social worker. Initially, he was not keen on the idea of taking Hope to a children’s hospice. He remembers: “I had never been to a children’s hospice before so I really didn’t know what to expect. All this changed when I came to Richard House and saw what a fantastic place it was, with such a positive environment and friendly staff. I think they are fantastic, just fantastic, and they have made such a difference to all of us.”

He continued; “Hope loves coming to Richard House as she gets to meet other children and have fun. It makes me so happy to see how much she is enjoying herself here. She loved meeting the Star Wars pair and with winning her favourite Disney character on the tombola today, she is beaming with an even wider smile than usual!”

Festival atmosphere
The Steel Band’s lilting sounds joined the sunshine to create a festival atmosphere. Opera singer Birgit Beer, West End musicals from Two’s a Crowd, and popular melodies from Lewie and Linda along with choirs lifted all assembled in the hospice garden. Bhangra dancing and Bollywood singing from Tara Khare and friends so delighted the crowd that some of the children joined in.

The Rt Hon Stephen Timms is the Member of Parliament for East Ham and is involved in its communities and people. Attending the event he said; “I am passionate about the wellbeing of the people I serve and Richard House is a great example of people from the differing faiths and cultures which make up this community and beyond, coming together to look after the whole family when they need it. I am delighted to be here and share the celebration of life and the warmth shown here today.”

Councillor Abdul Aziz, the first member of the Muslim community to serve Barking and Dagenham as its Mayor, attended with his wife the Mayoress. He said; “We are delighted to be part of Richard House’s summer celebrations and have thoroughly enjoyed our visit, meeting families and staff who make such a difference to so many seriously ill children.”

Entertainment
There was plenty of entertainment for both young and old to enjoy, including a visit from Darth Vader and a storm trooper. They were full of the force but decided to use it bring smiles to the children’s faces for the day.

Chief Executive of Richard House, Chris Baker, said; “The support and funds from today underpins all we do and ensures we can provide the necessary support to children with life limiting illnesses and to their families.”

He continued, “We are looking at new ways of working, increasing the number of partnerships with other organisations, providing far more support in children’s homes and introducing new technologies. The needs of the children and their families will always remain at the centre of what we do and so we are very grateful for all the support here today.”

The event was supported by the Metropolitan Grand Lodge and Chapter of London as part of their 300th anniversary celebrations with 24 different masonic groups contributing to the event and the work of the hospice. Members from several of these lodges volunteered their time on the day as well, helping with the different games and activities on offer. In total these lodges and chapters were able to raise £15,500, including a special donation of £2,500 from the Metropolitan Masonic Charity, presented by Inspectors from the Metropolitan Grand Lodge.

£2 million needed
As a charity Richard House services are free of charge to the families we support and the majority of their funding is thanks to the generosity of the public. This year Richard House needs to raise £2 million to continue to deliver clinical care, short breaks and other residential services to children and young adults, while supporting their families through therapy and bereavement support.