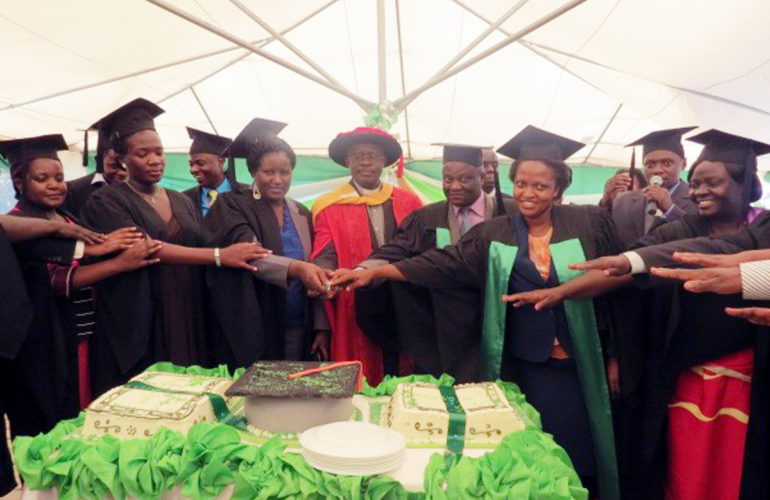 On 28 October 2015, Mildmay Uganda held its 6th graduation ceremony. Of the thirty-five individuals who graduated that day, seven were the pioneers who successfully completed the Higher Diploma in Paediatric Palliative Care course at Mildmay Uganda.

One graduate was a medical doctor, two were clinical officers, one a social worker and three were nurses. A further two students will be completing the course with the next cohort since they missed some modules. The successful graduates are Henry Balikuddembe, Mildred Bakaalikwira, Michael Mukiibi, Dr Annet Nakirulu, Byarugaba Beinomugisha, Miriel Kabigarire and Evelyne Angeyo.

The diplomas were awarded to the graduates by Professor Sam Luboga of Makerere University. Also present at the ceremony was Edith Akankwasa, the Director for Training and Education, Mildmay Uganda.

Journey
This ceremony is the culmination of a journey that began in 2009 when Mildmay Uganda was selected to be one of the three organisations in Africa to establish a Children’s Palliative Care (CPC) Training and Clinical Centre of Excellence. The aim of the project was to improve access to children’s palliative care services in South Africa, Tanzania, and Uganda, through better-trained health professionals. The Diana Princess of Wales’s Memorial Fund was the major funder of the three year project.

The course is open to recognised professionals in health and/or social care: Nurses, Doctors, Clinical Officers, Physiotherapists, Counselors, Social Workers, Psychologists and Spiritual Counselors among others.

Appreciation
David Kavuma, Course Co-ordinator expressed his appreciation to Professor Julia Downing (Director of Education and Research for the International Children’s Palliative Care Network (ICPCN) for her support for the programme and as an external examiner as well as Dr Jenny Ssengooba who was one of the programme facilitators who “never lets us down whenever we request her to teach the students.

In addition, he expressed Mildmay Uganda’s deep gratitude to the Diana, Princess of Wales Memorial Fund for sponsoring the students on the programme.

Mildmay Uganda is a specialist HIV & AIDS care and training centre situated on Entebbe Road, at Lweza, South of Kampala and is an accredited centre for higher learning with a license from the National Council for Higher Education. Should you wish to find out about the next intake for the Paediatric Palliative Care Diploma, you can contact David Kavuma via email at david.kavuma@mildmay.or.ug